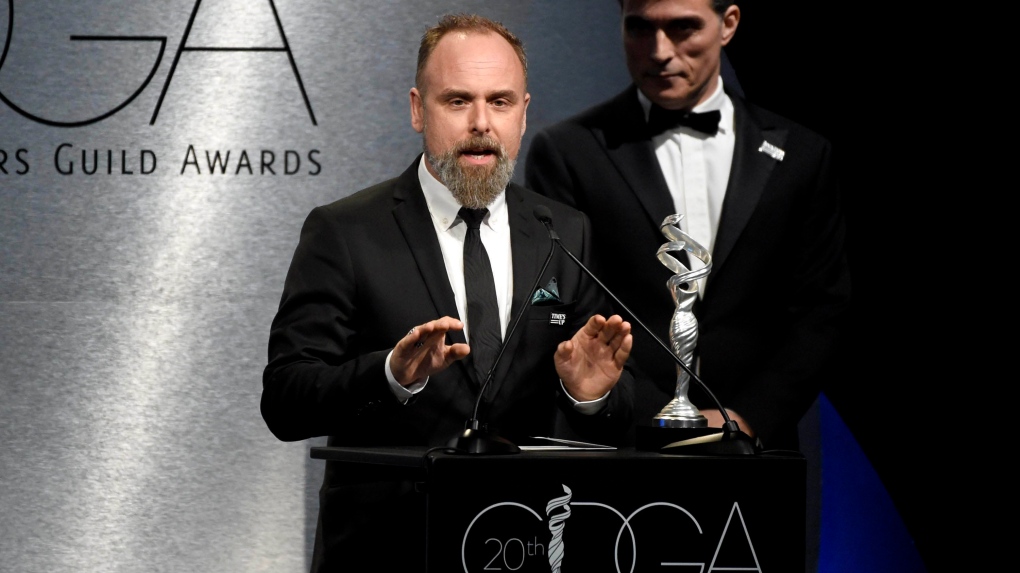 Luis Sequeira accepts the award for excellence in period film for "The Shape of Water" at the 20th annual Costume Designers Guild Awards at The Beverly Hilton hotel on Tuesday, Feb. 20, 2018, in Beverly Hills, Calif. (Photo by Chris Pizzello/Invision/AP)

TORONTO -- The Oscar-nominated costume designer for "The Shape of Water" and a visionary for the clothes horses of CBC-TV's "Schitt's Creek" are among those vying for a new award celebrating costumes in Canadian film and television.

The nominees for the inaugural Canadian Alliance of Film & Television Costume Arts & Design awards include Luis Sequeira for his big-screen work on the Cold War-era love story about a mute woman who falls in love with a sea creature. He competes in the period film category against designers for "Maudie," "Indian Horse," and "Final Vision."

Sequeira is also nominated in the contemporary film category for his work on Netflix's "The Christmas Chronicles," which faces off against the wardrobe pros from other Netflix productions "To All the Boys I've Loved Before" and "Hold The Dark," and Lifetime's "Harry and Meghan: A Royal Romance."

Meanwhile, Debra Hanson of "Schitt's Creek" earns a nomination for dressing a once-rich family whose designer duds are among the few remnants of their previously privileged life.

She competes in the best contemporary TV design category against Michael Ground of Citytv's "Bad Blood," Rebekka Sorensen-Kjelstrup of Netflix's "Riverdale" and double-nominee Lorraine Carson for her work in Netflix's "The Exorcist" and ABC Spark's "Siren." Ground is a triple nominee who is also recognized for work on CBC-TV's "Caught" and Netflix's "Frontier."

The CAFTCAD awards are set to take place Feb. 10 at the Aga Khan Museum in Toronto.

The event is run by the Canadian Alliance of Film & Television Costume Arts & Design, which was formed in 2008 to promote costume design for film, television and media. It aims to celebrate Canadian citizens and permanent residents who worked on productions produced in Canada, involving costumes primarily made in the country. For co-productions, organizers say at least half of the creation and build of costumes must be within Canada.

Productions with multiple nods include three each for "The Shape of Water" and Netflix's "A Series of Unfortunate Events" and two for the Space series "Killjoys."