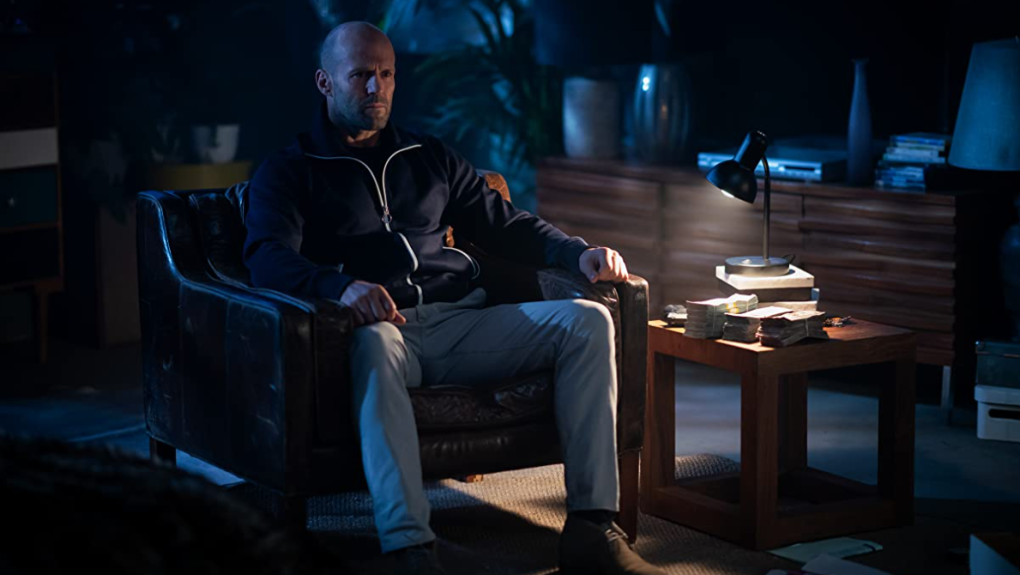 Jason Statham is seen in the film "Wrath of Man." (MGM) 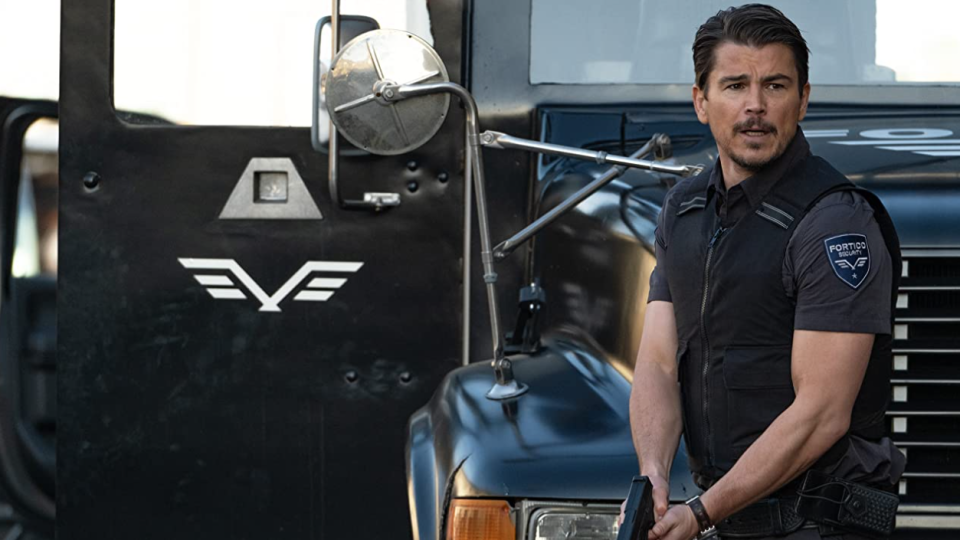 “Wrath of Man,” a remake of Nicolas Boukhrief’s 2004 French film “Le Convoyeur,” is a revenge heist flick that sees director Guy Ritchie reunited with his trademarked tricky storytelling style, Jason Statham, and the ruthless violence that made his early movies such eye poppers.

Statham plays “’H’, like in bomb,” a man of few words with a mysterious past – big surprise there. They should call him Gazpacho because he is the coolest of cool cucumbers. No matter what, this guy’s pulse rate never rises above 50 beats per minute.

When we first meet him, he takes a job as a security guard for Fortico, a Los Angeles armored car company. A recent robbery left three people dead and made the surviving guards edgy and uneasy. “Do you have any idea how dangerous this job can be?” a coworker named Boy Sweat Dave (Josh Hartnett) asks him. “We ain’t the predator, we’re the prey.”

When some very bad people attempt to rob one of the company’s cash trucks “H” reveals a special set of skills to the shock and awe of his co-workers. “It doesn’t feel right,” says security guard Bullet (Holt McCallany). “It’s like he wants the trucks to get hit.”

As the bodies pile up “H’s” lethal past is exposed and it becomes clear that he didn’t take the gig at the armored car company simply because he needed a week to week pay cheque. “I can do in two weeks,” “H” says to the shadowy Agent King (Andy Garcia), “what you wish you could do in twenty years.”

Now playing in theatres and coming soon to VOD, the movie is told in a broken timeline and sectioned-off into chapters with names like “Bad, Animals, Bad” and “Scorched Earth.” But the movie’s plot can be boiled down to one line. “I do bear a grudge,” “H” says, summing up the film’s raison d'etre as bullets fly and bodies pile up. A nihilistic story about revenge decorated with a tense heist subplot, it’s a riff on Statham’s earlier work in which he usually played either Character #1, a “loner with a past who must protect a loved one,” or Character #2, the “loner with a past who must protect a youthful innocent.”

Here he shakes things up by showing a disregard for the lives of some while avenging the loss of a loved one. Gone is the jokey Statham of “Spy” and his over-the-top “Fast and Furious” work. This is a back-to-basics performance that sees him settle on one facial expression, as though his chiseled face is encased in amber, to convey the character’s one deadly motive. The taciturn thing has worked for him before and it works well here. “H” is no laughing matter. Danger follows him around, and Statham’s coiled spring performance, no matter how basic, suggests that ultra-violence could erupt at any moment. It gives the movie much of its edge as Ritchie navigates the grim but stylish goings-on.

Are there plot holes? Yes. I can’t go into them without giving the story away but let’s just say “H’s” resilience is impressive.

Somewhere buried deep in the gunplay there is an elegance to “Wrath of Man.” Ritchie’s tough-talking film is tautly crafted, and, for those expecting “Snatch” style editing tricks, quite restrained.

The editing, not the violence.

Shot through a hail of bullets, the movie builds to a tense “Heat” style climax that doesn’t waste time or ammo. The jittery atmosphere is amped up by an angrily effective score from composer Chris Benstead.

On the downside, Ritchie’s taste for macho posturing doesn’t add much to the film’s early scenes. There are barely any female characters, save for Niamh Algar’s security guard Dana and assorted wife characters, and the hard-boiled dialogue between the often men borders on parody.

“Wrath of Man” is bleak and the characters are all, at best, anti-heroes, but for those with a taste for adrenaline pumping action set pieces, “Wrath of Man” delivers.

STREET GANG: HOW WE GOT TO SESAME STREET: 4 STARS 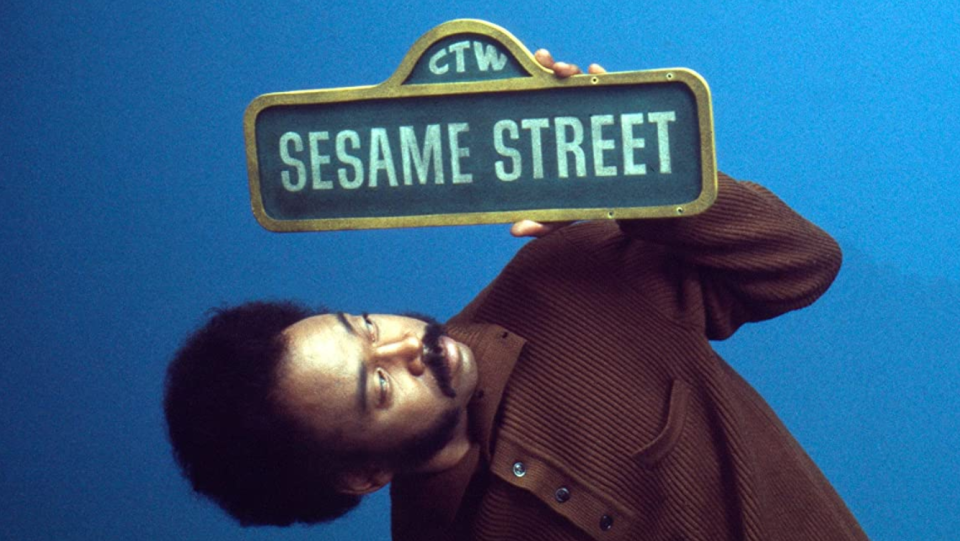 The long-running kid’s show Sesame Street doesn’t have the same zeitgeisty impact it once did, but a new documentary called “Street Gang: How We Got to Sesame Street,” now on VOD, is a behind-the-scenes look at the undeniable impact Big Bird and company had on the minds of several generations of young people.

Based on Michael Davis’ 2009 book “Street Gang: The Complete History of Sesame Street,” the doc takes a step-by-step approach, detailing the educational initiatives and creativity that paved the way to Sesame Street.

Director Marilyn Agrelo focuses on three characters; co-creator and producer Joan Ganz Cooney, writer, director and producer Jon Stone, and Muppets creator Jim Henson. Through the lens of this powerhouse trio, and plenty of others like “C Is For Cookie” and “(It’s Not Easy) Bein’ Green” composer Joe Raposo, a portrait emerges of a show that corralled the revolutionary spirit of the time. Progressive, inclusive and overtly political, the creatives moved away from the tried-and-true kid’s show format which was, more often than not, simply a vehicle for subliminal advertising aimed at mom and dad’s pocketbooks, to something that would not only entertain but also educate.

Bringing the show to air wasn’t without speed bumps. A Mississippi educational board deemed “Sesame Street” too controversial for the youth of their state in 1970. A ruling soon overturned the ban, but not before it made national headlines. Agrelo also delves into Stone’s depression and Henson’s workaholic tendencies, but, by-and-large, the movie is a shiny, happy document that drips with nostalgia.

As “Street Gang” essays the show’s nuts-and-bolts, it does so with energy and a sweetness that emanates from the material. It’s a loving portrait, painted with clips that are sure to trigger happy memories for those who grew up watching the show, or even watching kids as they watched the show. Add to that a blast of nostalgia and some rare footage—this is worth a watch if only to see Johnny Cash and Oscar the Grouch duet on the folk song “Nasty Dan” or Odetta do "If I Had a Hammer" with the kid cast—and you’re left with a documentary captures the enduring spirit of a show that changed television and the world.

“There is no such thing,” says her manager (Sarah Chalke).

As the cringe comedy begins Sid is unlucky in love, an expert in saying the wrong thing, misreading signals and trying too hard. “I understand that I am not the most exciting person out there,” he says. When he is named co-chair of the upcoming University of Pennsylvania’s reunion it is the beginning of a spiral. Setting up a Facebook page to publicize the event, he repeatedly messages Banks, an alumnus he claims to have been acquainted with decades ago.

Not realizing the posts are public, he bombards her account with a series of personal notes inviting her to the reunion. His many messages go unnoticed by the star but not her team, who file a restraining order against him. When the posts go viral — “What does that mean?” he asks — his life unwinds as he is publicly and personally humiliated.

Based on the novel “The Locklear Letters” by Michael Kun, “Eat Wheaties!” (that was Banks’ catchphrase in school), is a mix of tragedy and comedy, made human by Hale’s performance. Sid could have been a collection of quirks but Hale paints him differently. Sid is a lovable loser and Hale plays him as a sweet, lonely guy, oblivious to the hole he’s digging for himself.

“Eat Wheaties!” is a tightly paced comedy which is more about kindness and doing the right thing than it is about knee slapping jokes. It is occasionally knee-slapping funny but the laughs come from kind-heartedness, not cruelty and that makes this quirky comedy a winner. 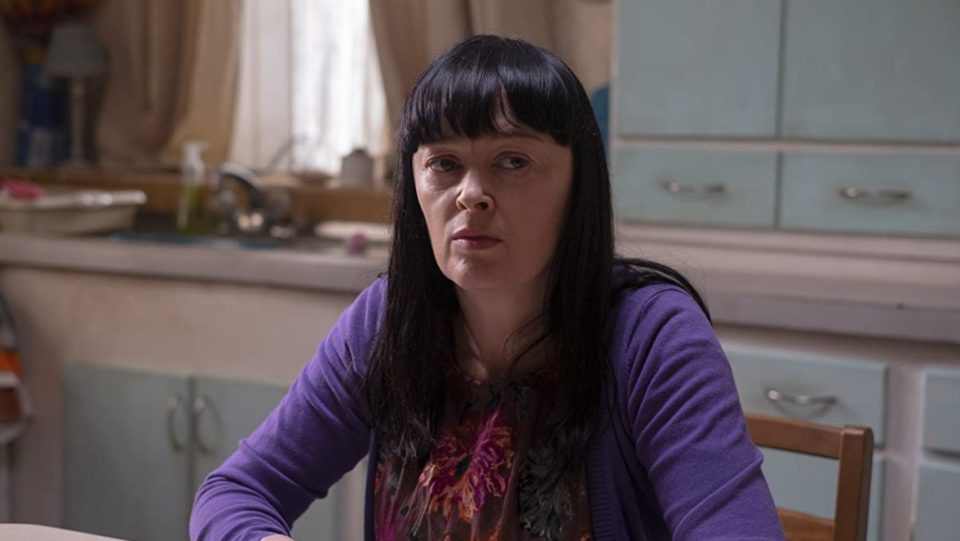 Set in Derry in Northern Ireland, “A Bump Along the Way,” now on VOD, feels like a slightly more grown-up version of the recent Netflix hit “Derry Girls.”

Bronagh Gallagher plays forty-something single mother Pamela. She’s a free-spirit who likes a good time which stands in sharp contrast to her judgmental, vegan teenage daughter Allegra (Lola Petticrew). When a one-night stand with a much younger, local plumber leads to a “geriatric pregnancy,” Pamela is told by her gynecologist that this time will be different. “You have more sense,” he says, “more experience, you’re financially better off.”

Barry the plumber (Andy Doherty), like Allegra’s father many years before, becomes a ghost when he hears the news, leaving mother and daughter to put aside their differences and prepare for the arrival of a new family member.

“A Bump Along the Way” is a feel-good movie that transcends the usual cliches of the genre. It weaves the tried-and-true freethinking mother and uptight daughter with big dollops of misogyny, sympathy and a few laughs. Director Shelly Love emphasizes not only Pamela and Allegra’s real-life trials and tribulations but also the joy in a film that brims with empathy.

Strong central performances from Gallagher and Petticrew bring authenticity to a story that threatens to dissolve into overly treacly territory, but never does. It’s not exactly a kitchen sink drama, it’s too sanguine for that, but, like the Netflix show that would work as a companion piece for a night’s binge, it is a well observed story with terrific, earthy performances.