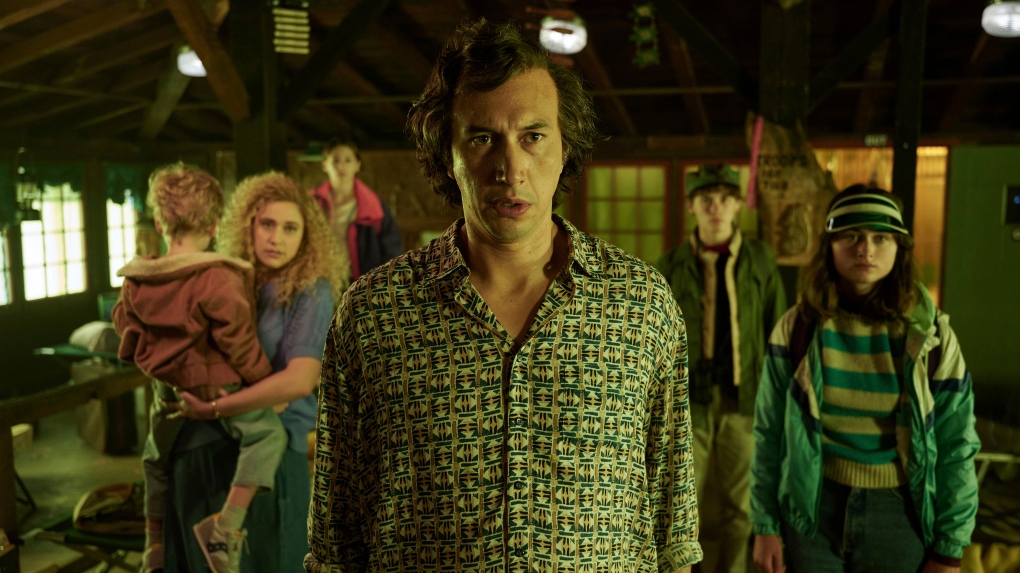 This image released by Netflix shows Adam Driver, center, in a scene from "White Noise." (Wilson Webb/Netflix via AP) 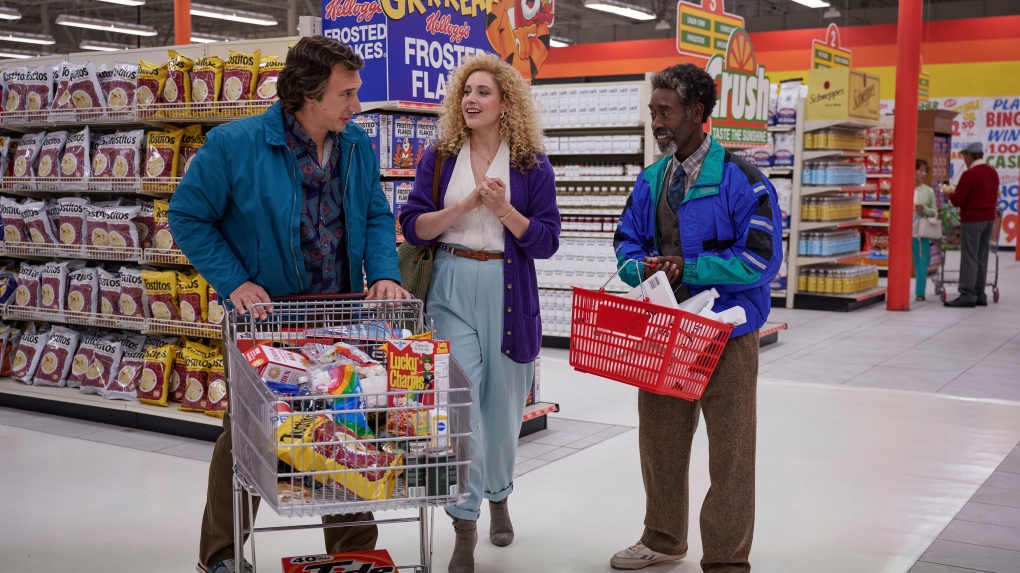 This image released by Netflix shows Adam Driver, from left, Greta Gerwig, and Don Cheadle in a scene from "White Noise." (Wilson Webb/Netflix via AP)

Director Noah Baumbach has made idiosyncratic movies in the past like “The Squid and the Whale,” “Margot at the Wedding” and “While We're Young.” But his new film, “White Noise,” an adaptation of the 1985 novel of the same name by Don DeLillo, now playing in theatres before moving to Netflix in December, may be his quirkiest to date.

Adam Driver is Professor Jack Gladney, a middle-aged college lecturer whose life’s work is the study of Adolph Hitler’s rise to power. He is a superstar in the world of academia, and a loving father to the blended family he shares with elaborately coiffed wife Babette (Greta Gerwig). In his quiet moments, however, he is obsessed with mortality, afraid that he will outlive his wife, and be left alone.

Babette, or “Babo” as the family calls her, also has a secret. She’s been taking an experimental drug, one that makes her forgetful and furtive.

In the second of the film’s three act structure, the family’s day-to-day lives are turned upside down when a nearby railway accident unleashes a toxic cloud over their town. Forced to evacuate and take shelter from the “Airborne Toxic Event,” they hit the road, and, in new circumstances, cracks in the family structure are revealed.

The final sequence manages to both tie up loose ends while taking the story in a completely new and unexpected direction toward murder, mortality and moral turpitude.

There is much to enjoy in “White Noise.” Gerwig and Driver seem born to recite Baumbach’s dialogue, bringing dry humor to the ever-escalating situations the Gladneys find themselves in. Lines that wouldn’t necessarily read as amusing on the page are brought to life by the delivery of these two perfectly cast actors. A third act back-and-firth between them, a cleaning of the air scene, is masterfully played, poignant and peculiar at the same time.

Baumbach also nails the 1980s time period, in both style and attitude, sharpening the satire with a vintage look that could have been borrowed from any number of contemporaneous sitcoms or big screen comedies. Also, this may be the one and only movie that can cite “National Lampoon’s Vacation” and “Barry Lydon” as stylaistic inspirations.

The look elevates the hectic family scenes, with everyone speaking over one another, wandering in and out of frame, like a mix of Robert Altman and “Family Ties.”

But, and I wish there wasn’t a but, a lack of cohesion between the film’s three sections gives it a disjointed feel, almost as if you’re watching a trio of short films with the same cast and characters. The clear-eyed lucidity of the opening act drifts as the running time sneaks toward the end credits. Once the movie leans toward the spectacle of the “Airborne Toxic Event” it loses its way, valuing the unwieldy, bewildering consequences of Jack and Bobo’s existentialism over clarity.

There are funny, satiric, enjoyable moments and performances in “White Noise,” but the initial suburban satire loses its way, succumbing to the busy script’s white noise. 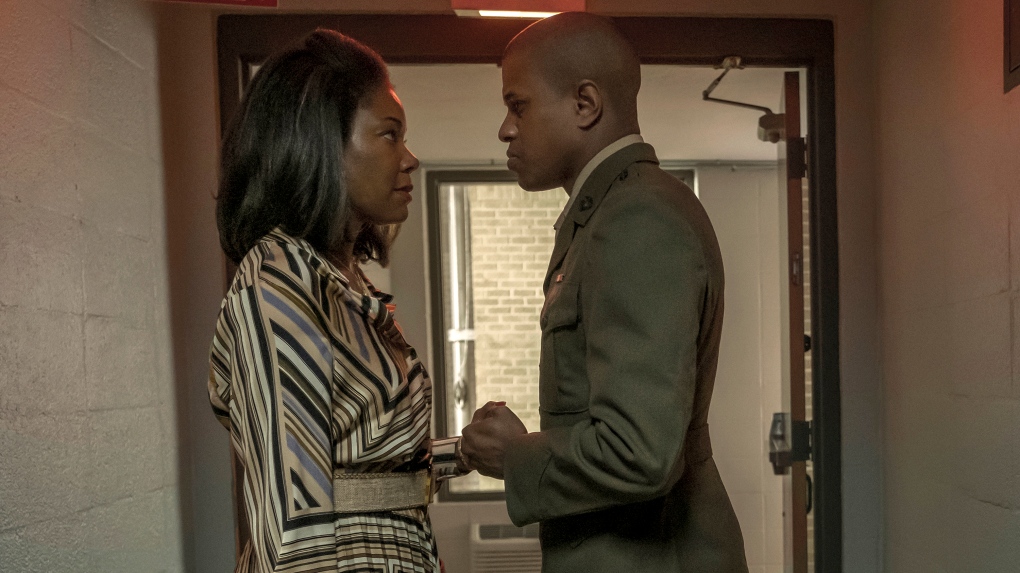 This image released by A24 Films shows Gabrielle Union, left, and Jeremy Pope in a scene from "The Inspection." (Patti Perret/A24 Films via AP)

Based on writer/director Elegance Bratton's experiences as a queer Black man in the Marines boot camp, “The Inspection,” now playing in theatres, avoids the jingoistic tone of so many films set within the military. Instead, it is a painful, cathartic tale of overcoming oppression in order to survive.

When we first meet Ellis French (Jeremy Pope), he’s a queer, 26-year-old Black man, cut loose from his disapproving family. “I will love you till the day that I die,” says his prison guard mother Inez (Gabrielle Union), “but I can’t love what you are.” Her deeply held religious beliefs have led her to reject her son, so much so, she even puts down a newspaper on the couch before he sits. With no home to call his own, he has spent years living rough, in and out of Trenton, New Jersey shelters.

With no money and no family support, he makes the choice to join the Marines and do whatever it takes to create a future for himself in the military. At boot camp Ellis, nicknamed French by the other recruits, is a disciplined candidate, even under pressure from his strict drill sergeant (Bokeem Woodbine) who promises, “I will break you.”

Although French never formally announces his queerness, his sexuality puts a target on his back. At the barracks, despite beatings, bullying and outright bias, he excels, proving to himself, the other jarheads and possibly even his homophobic mother, he has found his niche.

“The Inspection” will likely bear the weight of comparison to “Full Metal Jacket,” but despite the obvious similarities in location and the presence of a harsh drill sergeant, these are two very different films thematically. Bratton’s film is not an anti-war film. Instead, it adopts a neutral stance to most of the questions about the duality of war Stanley Kubrick raised in “Full Metal Jacket,” preferring to concentrate on the more introspective note of one man’s transformation in the face of adversity.

This is a classic against-all-odds story that paints a vivid picture of life inside the boot camp, the dehumanization, the violence, but also brotherhood, in the form of instructor Rosales as played by Raul Castillo. Bratton and cinematographer Lachlan Milne carefully build the world of the boot camp, creating a palette of claustrophobia, brutality and tension that adds layers to the telling of French’s survival story.

Bratton brings a personal touch to the filmmaking that feels therapeutic, the kind of storytelling that can only come from his lived experience. The director is aided by a raw and powerful performance from Pope and an unrelenting Union, whose work helps elevate the occasionally cliched aspects of the story.

BONES AND ALL: 3 STARS 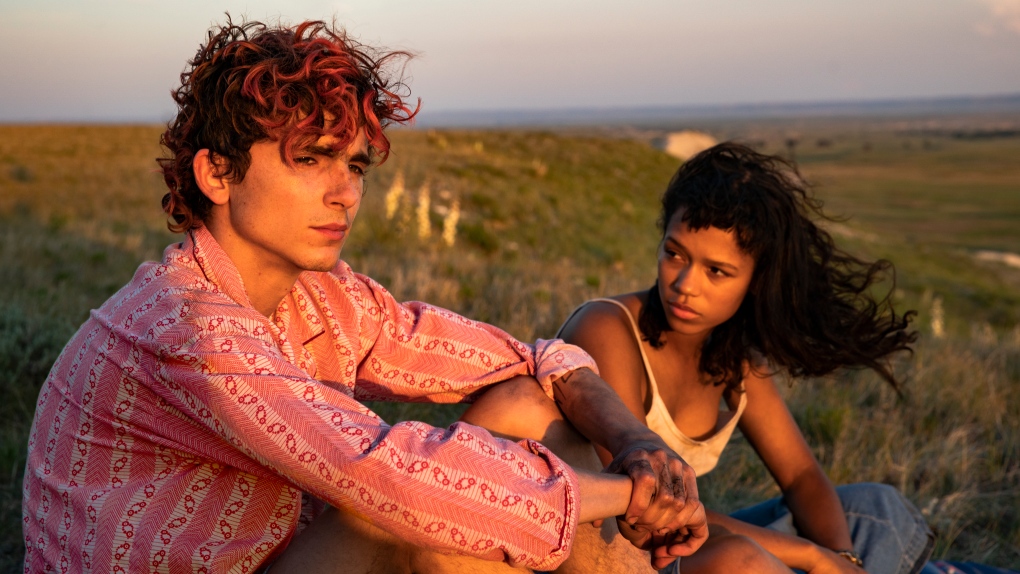 This image released by MGM Pictures shows Timothée Chalamet and Taylor Russell in a scene from "Bones and All." (Yannis Drakoulidis/Metro Goldwyn Mayer Pictures via AP)

Usually, it is fairly easy to pigeonhole a movie. Comedy, drama, romance, sci fi, horror, action. Those are the easy ones. It gets slightly more complicated as you branch off into hybrids like dramedy, Menippean satire, docufiction or rom-com. Then, along comes a movie like “Bones and All,” a new, queasy genre buster starring Timothée Chalamet, Taylor Russell and Mark Rylance, and now playing in theatres.

Based on the 2015 novel of the same name by Camille DeAngelis, it is something I’ve never seen before, a "romcanrofi", which I describe as a romantic, coming-of-age cannibal road film.

When we first meet Maren (Taylor Russell), she is a seventeen-year-old high schooler, being raised by single father Frank (André Holland). She appears to be a normal teen, sneaking out to a slumber party with schoolmates and the like, but when her taste for human flesh reveals itself, Maren and her dad have to hit the road before the police turn up.

When Maren turns eighteen, her father disappears, tired of hiding her terrible secret. Leaving the teen to fend for herself, he leaves behind some money, her birth certificate and a tape recording describing her life, from her first cannibalistic incident when she was just three-years-old, to providing details about Janelle (Chloë Sevigny), the mother who abandoned Maren when she was an infant.

On a search for answers, Maren hits the road, landing in Ohio, where she meets Sully (Mark Rylance), an older cannibal who says he could smell a fellow “eater” from blocks away. Like Maren, Sully is a drifter, but he’s not looking to answer life’s questions, he’s on the hunt for food. “Life is never dully with Sully,’ he snorts.

Sully teaches her the tricks of the trade, how to pick victims and feed without attracting attention, but something about him makes Maren uncomfortable and she moves on to Indiana where she meets Lee (Chalamet), a fine young cannibal who becomes her partner in life and death.

“Bones and All” isn’t exactly a horror film. The subject matter might be horrifying and there are some stomach-churning sound effects that won’t easily be forgotten, but this is more a coming-of-age love story as Maren adapts to her ever-changing circumstances.

The blood and guts are kept to a minimum, mostly serving as a vehicle for the movie’s metaphor of cannibals as anyone who has ever felt like an outcast. Maren and Lee are the ultimate others, a compulsive couple who aren’t treated as monsters, but as two people living outside of collective norms. Come for the cannibals, stay for the languid, sensitive essay on life on the fringes of society.

Seductive and strange, director Luca Guadagnino anchors the movie with his two leads, Chalamet and Russell. Both are driven to extremes by their appetites, while, at the same time, searching for acceptance and a place to call home. Both actors bring humanity to their characters, concentrating on their personal journeys rather than the monstrous aspects of their personalities. Their performances give the eccentric story a universal feel even if it is a very specific topic.

“Bones and All” has more to do with relationship road movies like “Two-Lane Blacktop” and “Badlands” than it does “Cannibal Holocaust.” It’s a haunting tale, if a little languorous for its own good, that makes a meal out of its allegory.