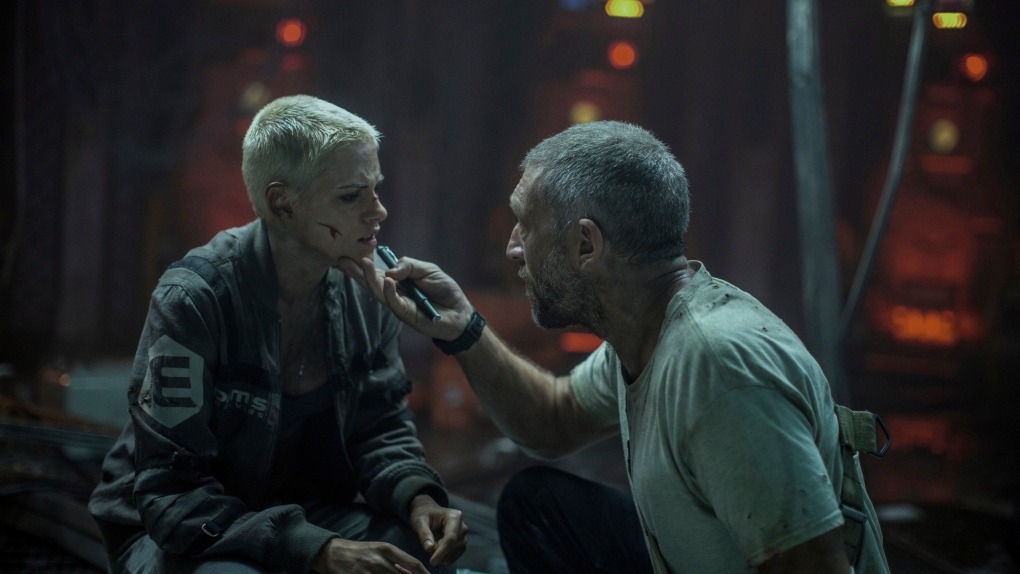 Who says the “Alien” franchise is dead? Ridley Scott may have exhausted the storytelling possibilities of the original franchise but don’t tell that to Kristen Stewart and the annoying T.J. Miller, stars of the new thriller “Underwater,” a.k.a. “Aquatic Alien.”

Stewart is Norah, an engineer working on a rig at the bottom of the ocean. She and the crew of nautical scientists, (Vincent Cassel, Jessica Henwick, John Gallagher Jr., Mamoudou Athie, Gunner Wright and Miller) are at the mercy of the watery depths when an earthquake destroys their subterranean laboratory. As they fight for survival, they discover they may have woken a fierce enemy. “This better not be some ‘20,000 Leagues Under the Sea’ crap,” says Paul (Miller).

On the ocean floor no one can hear you scream, but we can hear lots of heavy breathing as the cast grunt their lines into their deep-sea diving suits.

“Underwater” is an ocean floor, people in peril flick, with loads of wet, claustrophobic atmosphere but little in the way of actual thrills. The earthquake happens in the opening minutes of the film, throwing the characters into danger right off the bat so we don’t get to know anything about them other than their “never say die” attitude and Norah’s wondrous ability to squeeze through very tight spaces before the bad stuff happens. There is no emotional connection, just characters navigating the murky depths with the occasional jump scare thrown in. The final showdown with the deep-sea beast has a certain majesty to it, but by then, echoes of better movies like “Alien,” “The Abyss” and ”Leviathan” have done in the film’s chances of making an impression.

Lots of movies have mined similar territory, but the ones that stand out add something interesting to the mix. Unfortunately “Underwater” brings nothing new to the outer space/underwater monster genre.

Roddy Doyle is best known for writing “The Commitments,” a comedy-drama with a toe tapping score. His new film, “Rosie,” is a much different movie. It won’t make anyone hum “Mustang Sally” on the way out of the theatre, but should inspire conversation about homelessness.

Sarah Greene is Rosie, mother of four, partner to restaurant cook John Paul (Moe Dunford). The happy north Dublin family lived in a rented home until the landlord sold the house, leaving them stranded. Hopscotching from one hotel to another, they desperately search for new accommodation while trying to camouflage their circumstances from family, friends and their children’s teachers. Increased rents and well-meaning, but Kafkaesque assistance bureaucracy, leave this family on the edge of having to live in their car.

“Rosie” is a cautionary tale. A gritty, empathic and timely look at the challenges families face when life takes an unexpected left turn. Doyle’s script, his first original screenplay in over 18 years, never sensationalizes the situation or asks for pity. It simply compassionately presents one family’s story of woe.

Director Paddy Breathnach’s background in documentary film lends “Rosie” a neo-realist feel that provides an up-close-and-personal portrait of growing desperation. Long, intimate takes bring an uninterrupted sense of the tragedy affecting the family, a feeling that builds throughout the film’s scant 85 minute running time. To its benefit it is definitely not a feel-good movie. Doyle and Breathnach offer up no easy answers to Rosie’s plight, just pure naturalistic drama with a social consciousness.

“She Never Died,” a feminist riff on the 2015 horror-comedy “He Never Died,” stars Oluniké Adeliyi as Lacey, an indestructible, immortal killing machine whose humanity makes her vulnerable.

Lacey lives on the streets, killing people she figures no one will miss. But she’s not trying to clean up the streets. Far from it. She hunts and kills criminals for food. She gouges out eyes as entrees, and is always careful to remove the fingers for later. “They fit in my pocket,” she says. “And I need the bone marrow.”

When grizzled Detective Godfrey (Peter MacNeill) gets wind of her abilities—surviving a gunshot to the head—he makes an offer. If she’ll agree to rid the world of the evil brother and sister team of human traffickers (Noah Dalton Danby and Michelle Nolden) he’ll find her a decent place to hang her hat.

She agrees, and with the help of Suzzie (Kiana Madeira), a young, streetwise woman rescued from a life of being sold by some very bad men, carnage ensues.

Canadian director Audrey Cummings has made a snazzy horror film with equal parts gore and gags. It’s not a horror-comedy so to speak, but thanks to some clever scripting, it’s a ton of fun with humour emerging organically out of the unusual situation. Combine that with the film’s brisk pacing and you have a movie that could become a midnight madness favourite.

“She Never Died” relies on some old school special effects to deliver the bloody stuff, but lo-fi though they may be, they pack a punch.

The blood and guts are fine, but the movie’s strong point is Adeliyi’s work as Lacey. Even though she only has a handful of lines, the film passes the Bechdel test (the film features women who talk to each other about something other than a man) and proves that Adeliyi doesn’t need pages of dialogue to create a compelling character. When she isn’t in motion, killing the villains, Lacey’s scenes with Suzzie give the film subtext about surviving trauma and the power of community that deepens the story and the characters. Come for the bloodshed, stay for the subtext.

Despite its rather abrupt ending — perhaps it’s meant to whet the appetite for a sequel, but it feels incomplete — “She Never Died” distinguished itself as a good and gory character study, with a style and feel all its own.