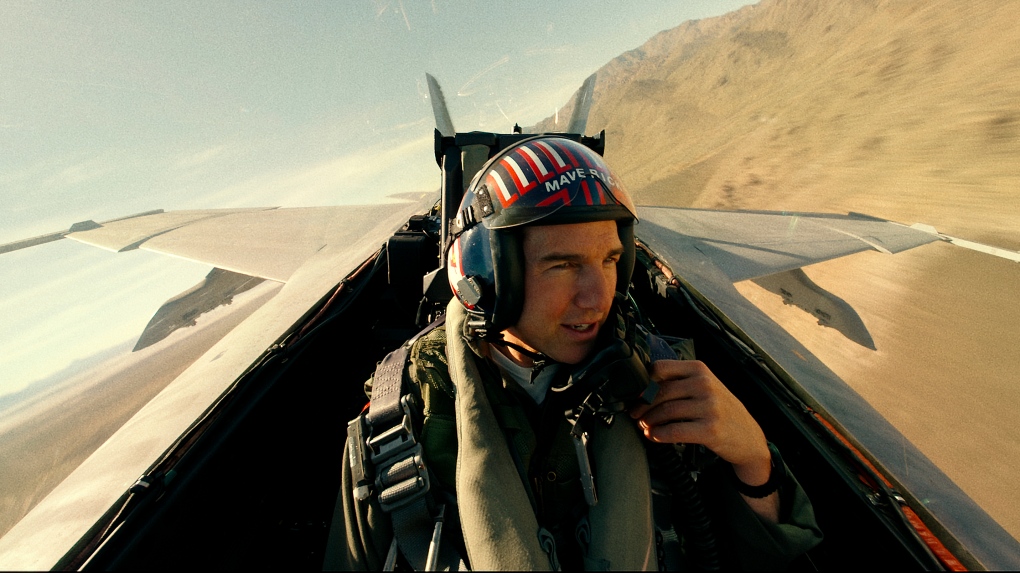 It’s been 36 years, but movie goers can once again ride into the danger zone.

Hot-headed test pilot Pete "Maverick" Mitchell (Tom Cruise) returns to the screen -- and sky -- in the high-flying sequel “Top Gun: Maverick,” which, despite the main character’s feats of daring, plays it mostly by-the-book.

When we first get reacquainted with Captain Maverick, he’s still the hotshot, risky pilot we remember from the first film. His cocky attitude and bad boy behaviour has kept him from being promoted. “I’m where I belong,” he says when asked why he’s not an admiral after decades of distinguished service. He’s popular with his peers, but not with the brass, save for his old friend and guardian angel, Admiral Tom "Iceman" Kazansky (Val Kilmer in an extended cameo).

Called back to Top Gun, the United States Navy training program where he learned fighter and strike tactics and technique, Maverick is presented with a last chance for glory. “You fly for Top Gun or you don’t ever fly for the Navy again.”

Cyclone is obviously disdainful of the arrogant Maverick, but acknowledges he is the best person to train 12 of the brightest and best recent Top Gun graduates for a dangerous mission to locate and destroy an underground uranium enrichment site.

For Maverick, the job comes with baggage. It places him in the vicinity of on-again, off-again girlfriend Penny (Jennifer Connelly), a new character, referenced in the first film as the daughter of an admiral. Most dramatically, one of his students is Lieutenant Bradley "Rooster" Bradshaw (Miles Teller), the son of Maverick's late best friend, "Goose,” played by Anthony Edwards in the first film. Rooster holds Maverick responsible for his father’s death and is resistant to Maverick’s training. “My dad believed in you,” he says. “I’m not going to make the same mistake.”

Of the 12 recruits, half will make the cut, one will be the leader, if Maverick can teach them the precision and “don’t think, just do” attitude needed to come home alive.

“Top Gun: Maverick” screenwriters Ehren Kruger, Eric Warren Singer and Christopher McQuarrie keep the story simple; a splash of romance, a dash of remorse, some shirtless volleyball and a mountain of eye-popping, aerial action. It’s a recipe that echoes the events of the first film to the point of déjà vu. Still, as an exercise in nostalgia, complete with callbacks to the original, and an emotional appearance by Kilmer, “Maverick” works because it blends old and new in a crowd-pleasing way. Unlike other recent 1980s and 1990s reboots, it salutes the original in tribute. Loud and proud, it wears its superficiality on its sleeve in an old-fashioned, last century style that is unabashed fan service.

But what really sets the new and old films a part is Cruise. He was a movie star then, and he’s a movie star now, but with age, the stakes for his character are higher. Maverick has a lot to prove, regrets to be dealt with and while the actor doesn’t appear to have aged at all, that trademarked Tom Cruise run can’t be as easy as it once was. Maverick is a still a hotshot, but here the character is tempered by the sins of the past and a real concern for the future. Cruise’s work shaves some of the hypermasculine edges off Maverick to reveal a more human and humane character than the first time around. It centres the movie with some earthbound emotion to counter the sky-high action.

“Top Gun: Maverick” is a sequel that plays it safe with the story, but lets it rip in the blockbuster action sequences, giving the audience the expected need for speed. 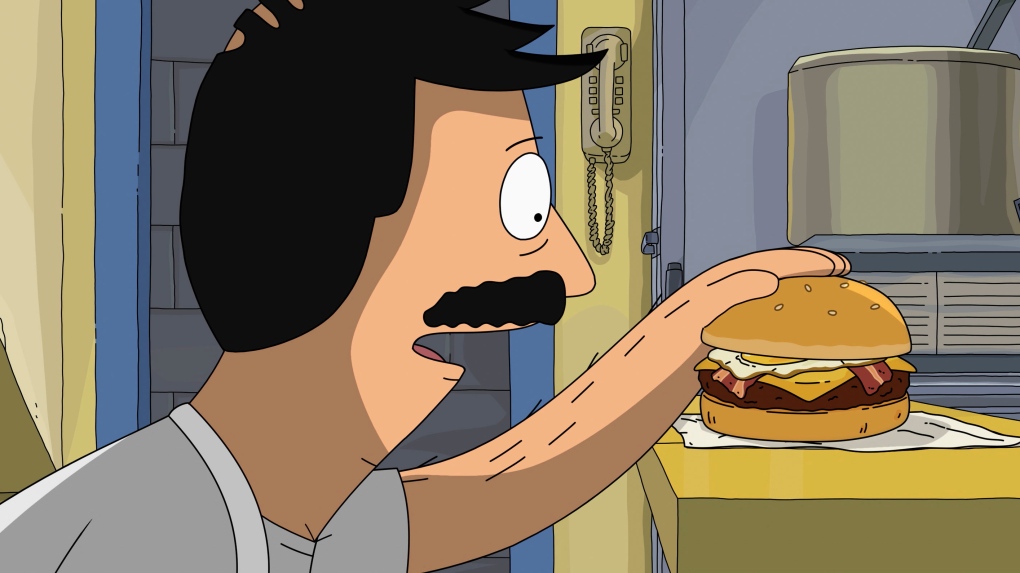 The list of sitcoms that have inspired movies is a short one. This week that exclusive list grows by one as “The Bob’s Burgers Movie” joins other animated shows like “South Park” and “The Simpsons” in making the leap from the small to big screen.

In what could be a super-sized episode of the television show, with a musical, murder mystery twist, the movie begins a week before the start of summer. The socially awkward daughter Tina (Dan Mintz) is hoping to hook up with her fantasy summer boyfriend. Son Gene (Eugene Mirman) hopes his latest musical invention, a napkin holder equipped with plastic forks, will be just the sound his band, The Itty Bitty Ditty Committee, needs to finally break through to audiences, and after a classmate calls her a “baby,” youngest daughter Louise (Kristen Schaal) is determined to prove that she is grown up and brave.

Parents Bob (H. Jon Benjamin) and Linda Belcher (John Roberts) have bigger issues. “Every day I give myself a little diarrhea from the worry and the stress,” Bob sings in the movie’s first big musical number. They have seven days to get a loan extension from the bank or they could lose their beloved burger joint.

When a giant sinkhole opens up directly in front of their business, they ask landlord, wealthy oddball Calvin Fischoeder (Kevin Kline), for an extension. “I’m of two minds,” he says, “and by that, I mean I’m drunk.”

When the sinkhole becomes a crime scene -- a “crime hole” they call it -- their problems increase, but an investigation by the kids may lead to a solution… or maybe something worse.

With the main creative crew and cast returning from the television series, it comes as no surprise that “The Bob’s Burgers Movie” has the same kind of irreverent, funny and punny dialogue that makes the show and characters such a delight for twelve seasons. “Bob’s” aficionados should get the fan service they expect, while newcomers should catch on to the vibe with ease.

It’s not all special sauce and sesame seed buns, though. The big musical number off the top is pretty great. It separates the movie from the small screen edition, with cool animated choreography and clever lyrics. Unfortunately, after that, it’s as if director Loren Bouchard left the rest of the musical score at home. There is a song or two later, one with a great “misdemeanors and wieners” rhyme, but the promise of something different, something cinematic, is by-and-large dashed.

Pacing problems make the final section, a far-too-long action, adventure sequence, a bit of a slog that sucks some of the fun out of the story. Still, like they say, the only bad burger is the one you didn’t eat, and up until then, “The Bob’s Burgers Movie” isn’t bad. It has enough laughs and clever dialogue to whet your appetite. 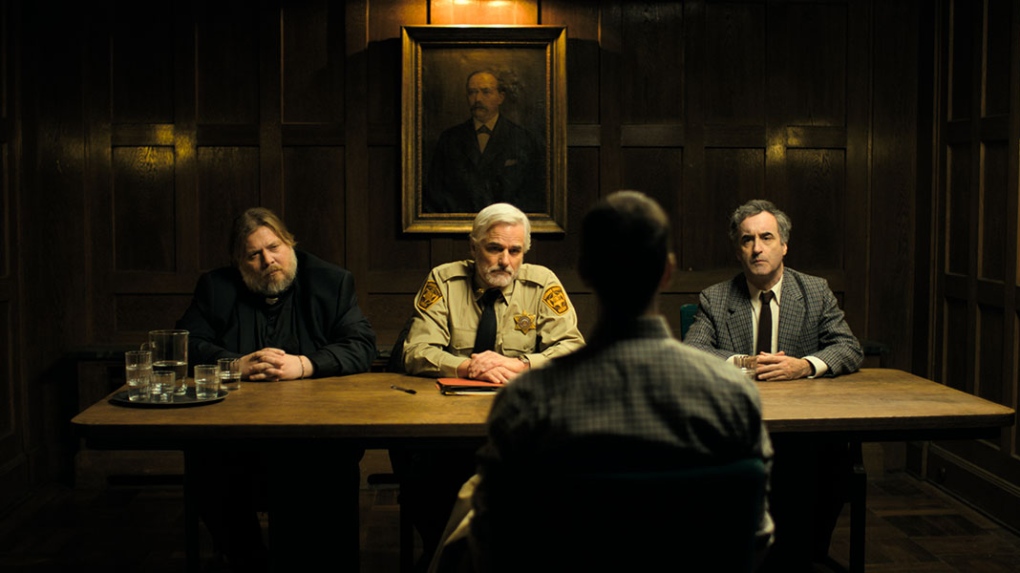 A scene from 'The Middle Man.' (Courtesy Tiff)

The new film “The Middle Man,” a dark comedy now playing in theatres, is the story of Frank (Pal Sverre Hagen), an unemployed man who takes a job in the accident capital of America.

The setting is Karmac in any Midwest state, U.S. Terrible things happen on an almost daily basis. It’s so grim there, the flags at City Hall are permanently at half-mast. The only growth industry in town is accident cleanup, the crew that comes in to tidy up after bad things happen.

The city is going broke, pretty soon they won’t be able to turn on the streetlights, which, says the local doctor (Don McKellar), will lead to even more mishaps, so they need to hire a Middle Man, someone to deliver bad news to the families of the bereaved.

Frank, out of work for three years, applies, even though his only qualifications are a hangdog demeanor and telling his mother that his father fell off a ladder, hit his head and died.

He gets the gig, learns the ropes—"Crying is a privilege that belongs to the next of kin,” says the sheriff (Paul Gross), “not the middle man.”—and forms a bond with receptionist Blenda (Tuva Novotny). When Bob (Trond Fausa Aurvag), Brenda’s ex-boyfriend and failed Middle Man candidate, strikes and kills Frank’s best friend, it sets into motion a series of events that causes an overwhelmed Frank to wonder if his new position is right for him. “It’s a busy job,” he says, “accidents don’t keep office hours.”

Norwegian director Bent Hamer, who also wrote the script based on a novel by Norwegian-Danish writer Lars Saabye Christensen, may have set the story in the Midwest, but his dark, deadpan humour is purely Scandinavian. This semi-comedic study of loss and grief is macabre in tone, but maintains a quirky, if bleak, sense of itself. Dialing up the farcical aspects of the story may have increased the film’s commercial appeal, but may have chipped away at Hamer’s thoughtful consideration of life in a small, unusual town.

“The Middle Man” won’t be for everyone, but viewers with a taste for unconventional, but restrained absurdism will find much to enjoy.

Nick Kyrgios cursed at the Wimbledon chair umpire and asked, 'Are you dumb?' He demanded to see a Grand Slam supervisor after questioning why his opponent, Stefanos Tsitsipas, didn't forfeit their ever-contentious, never-boring match for angrily hitting a ball into the stands after dropping the second set.