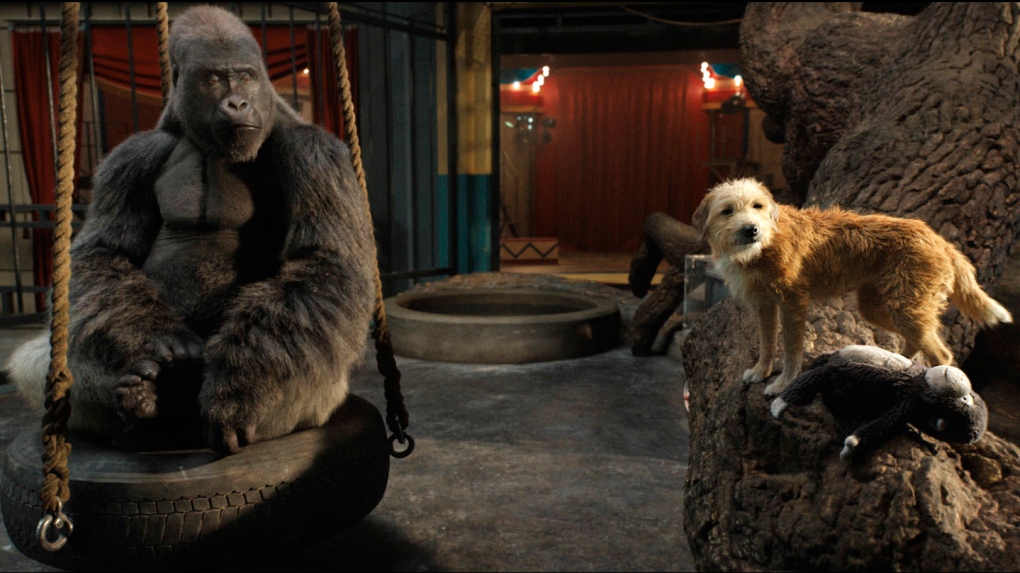 This image released by Disney Plus shows Ivan the gorilla, voiced by Sam Rockwell, left, and Bob the dog, voiced by Danny DeVito, in a scene from "The One and Only Ivan." (Disney Plus via AP) 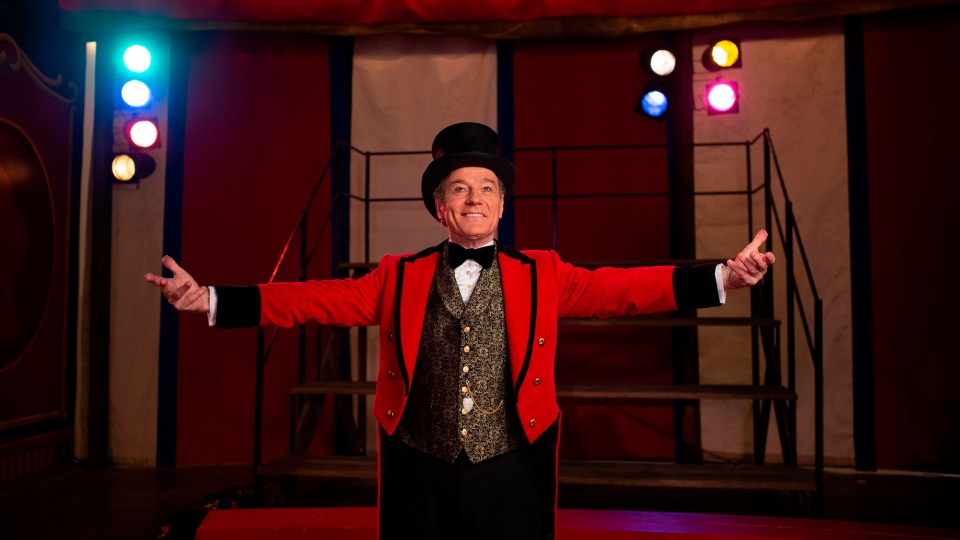 “The One and Only Ivan,” the new talking animal movie debuting on Disney+, is based on the best-selling children's novel of the same name written by K. A. Applegate, which was inspired by the life of Ivan, a real-life silver-back gorilla who lived, as an attraction, at shopping centre in Tacoma, Washington, for 27 years.

Set in 1973, the movie begins with Ivan (voice of Sam Rockwell) as the star attraction at the Exit 8 Big Top Mall and Video Arcade, run by Mack (Bryan Cranston), who does double duty as the big top ringleader. When Ivan isn’t locked away in a cage he’s performing to increasingly sparse crowds alongside an aging elephant named Stella (Angelina Jolie) or hanging out with his closest pal, a wise-cracking stray dog named Bob (Danny DeVito). Most of the animals have no recollection of how they got there; this is the only life they have ever known.

When an abused baby elephant named Ruby (Brooklynn Prince) joins the circus, Stella looks after her and makes Ivan to take care of Ruby if she cannot. With the help of Ruby and Julia (Ariana Greenblatt), the daughter of the mall custodian, Ivan begins to look past his cage to rediscover his past and move Ruby and his other animal friends to the safety of a zoo.

“The One and Only Ivan” features solid CGI—the fur and feathers, so often a problem in films like this, look real—and good voicework from the star-studded cast— Helen Mirren, Ramón Rodriguez, “The Walking Dead's” Eleanor Matsuura, Chaka Khan, “Hamilton” star Phillipa Soo and “Enlightened” creator Mike White—but it is the film’s messages that earn it a recommend.

The gently paced drama contains life lessons about leadership, treating all living creatures with kinship, love and respect and the value of promises. Best of all, it preaches and practices empathy for humans and animals. These are potent messages that all add up to the story’s main theme, that we can all make a difference in our lives and the lives of others.

“The Only and Only Ivan” softens the character of Mack, dialing down the wrong doing he displays in the book. It leaves the film with a villain-sized hole but Cranston is, nonetheless, an engaging performer, even if it would have been fun to see a little more Walter White in his portrayal of Mack.

The movie may not be appropriate for all ages. The animals in captivity and other realities of life at the Exit 8 Big Top Mall and Video Arcade are probably best suited for children in the middle grades and up. 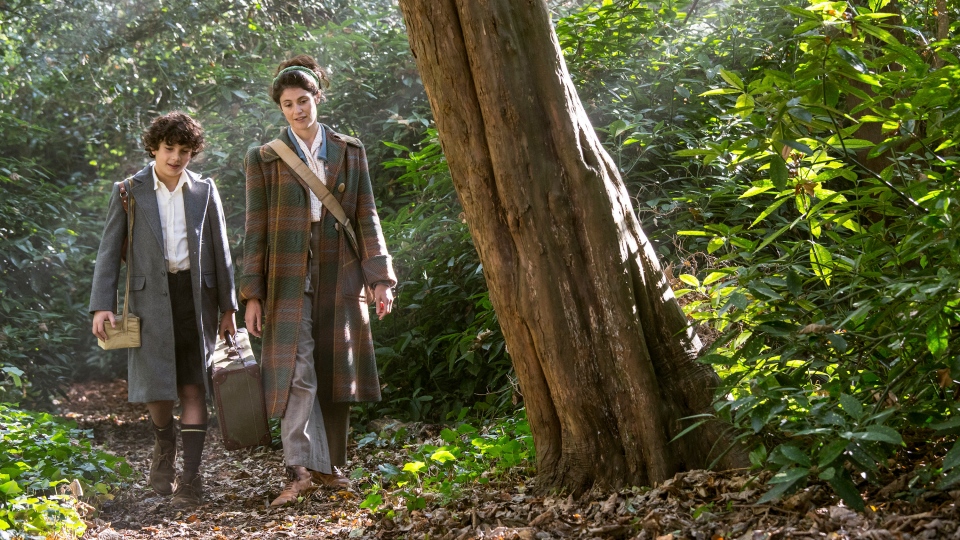 A wartime British story driven by character and emotion rather than action, “Summerland,” now on VOD, is a showcase for its actors, Gemma Arterton, Gugu Mbatha-Raw and Tom Courtenay.

Arterton is Alice Bloom, a chainsmoking writer who lives alone in a quaint seaside cottage in Kent. She’s a loner, prone to castigating anyone who interrupts her work. Among her neighbors, who have frequently felt the sting of her tongue, rumors fly that she is a witch, or worse, a Nazi sympathizer.

When she’s not typing furiously her thoughts drift backwards in time to the defining moment of her life, a love affair Vera (Gugu Mbatha-Raw). Alice was left heartbroken when Vera broke off the relationship, leaving for a man and the promise of a family. With bombs dropping on London, Alice becomes the unwelcoming host to Frank (Lucas Bond), a youngster evacuated from his city home as part of Operation Pied Piper.

She’s less than excited about having to care for the boy and Frank isn’t pleased either. Even less so when a school mate (Dixie Egerickx) warns him that Alice will “burn you and do sex things to you.” Over time and through tragedy, however, a bond unexpectedly forms between them.

“Summerland” is a feel-good movie that never digs too deep. It’s central life-is-not-fair theme is given a melodramatic treatment that leans toward the contrived but the relationships between the characters elevates the material.

As Alice lets her guard down to accept and nurture Frank, and he, in turn embraces her, the story transcends the predictability of its plot to find a sweet, tender and pleasing spot. It’s aided by beautiful cinematography courtesy of Laurie Rose and lovely production design, but make no mistake, the heart of this story is the characters and the actors who bring them to vivid life. 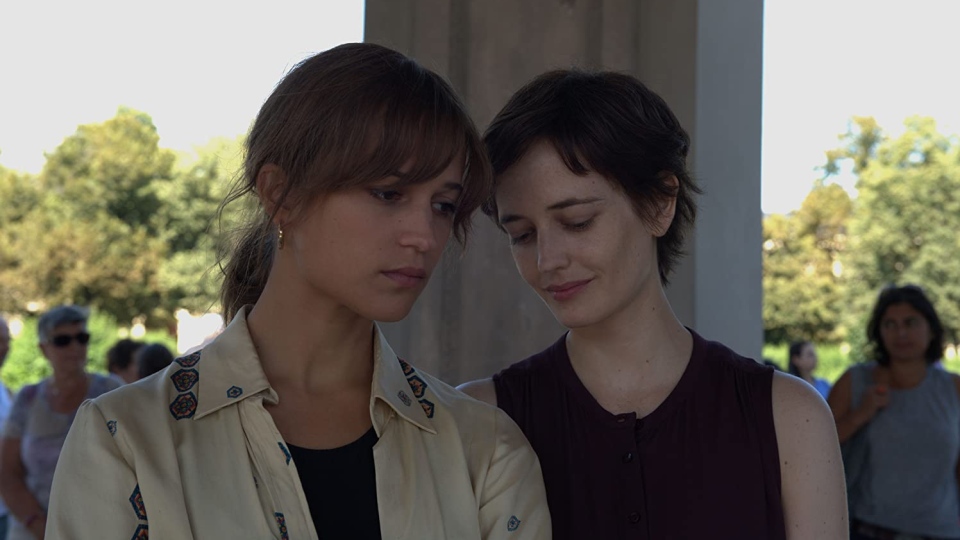 Unsurprisingly “Euphoria,” the new end of life drama starring Alicia Vikander and Eva Green and now on VOD, is a rather lifeless affair.

Not to be confused with the Zendaya television series of the same name, which positively sparkles with energy, this dreary story sees estranged sisters Emilie (Green) Ines (Vikander) looking grim for the entirety of the movie’s ninety-five-minute run time. In fact, using the title “Euphoria” on this movie may be the most ironic thing to happen in 2020, and that is saying something.

The “action” centers around the euthanasia clinic run by Marina (Charlotte Rampling), where Emilie, in the late stages of cancer, has chosen to end her life. Lush and lavish, the facility is essentially a five-star hotel, where rich people curate their deaths much the way influencers curate their lives on Instagram. Bands are hired to play at the going away party for one resident (Charles Dance) who wants to dance his life away while others choose less ostentatious but equally expensive exits.

It soon becomes clear the sisters have little in common except shared DNA. The two attempt a reconciliation but a decade old slight—Ines took off to travel the world after their parent’s divorce, leaving Emilie to pick up the pieces of their mother’s shattered life—has left a deep wound. The argue and throw food at one another before embracing the inevitable, the tolling of the bell (literally a bell rings at a guest’s time of death) for Emile.

It’s a pity “Euphoria” isn’t a better movie. Director Lisa Langseth fills the screen with interesting images and, in Ines and Emile, has two characters ripe with possibility. She’s chosen a serious subject to explore, and has good actors but they are forced to chatter their way through difficult situations while never showing us anything new or interesting.

Assisted death is an issue ripe for drama and yet the movie sidesteps every opportunity for depth with the kind of fake solemnity favored by undertakers.

SKIN: A HISTORY OF NUDITY IN THE MOVIES: 3 ½ STARS

“Skin: A History of Nudity in the Movies” calls itself the “definitive documentary” on the subject and it is hard to argue the point. An exhaustive looks at naked folks (although to be fair, it is mostly women) on film from the early silent days to the present, from the Hays Code to #MeToo, it bares all in an attempt to contextualize how nudity changed cinematic culture.

“Twenty minutes after they invented film someone started photographing naked people,” says one of the film’s experts.

Not for the prudish, “Skin” is illustrated with graphic film clips, ranging from Hedy Lamarr's “Ecstasy,” the first film to depict a woman having an orgasm, to Malcolm McDowell dropping trou at every opportunity beginning with “If....” in 1968 and culminating with Bob Guccione’s enhancements of “Caligula,” through to the werewolf three-way of “The Howling” to “Boogie Nights,” “American Pie,” Sharon Stone’s unwitting nude scene in “Basic Instinct” and beyond.

Using talking heads like Pam Grier, Shannon Elizabeth, Traci Lords, Mariel Hemingway, Sean Young, all of whom have disrobed for the camera, and directors like Kevin Smith, Amy Heckerling, Peter Bogdanovich who have directed others of them to do so, documentarian Danny Wolf assembles a revealing picture of a business that once thought appearing nude would ruin a career but is now an industry that expects and exploits nakedness.

“Skin: A History of Nudity in the Movies,” isn’t exactly clinical in its approach, it veers between the academic, the personal and the leering, but never shies away from real discussions. It’s a history lesson on how political and artistic interests changed the societal landscape, sometimes to be welcoming of screen nudity, others times censorious. It examines gender bias, the creation of sex scene intimacy coordinators, and the range of experience of those who have appeared nude for entertainment purposes.

“If I hadn’t done the nudity,” says “American Pie’s” Shannon Elizabeth, “I might not have a career today.” Contrasting Elizabeth’s experience is Chyler Leigh of “Not Another Teen Movie” who says, “I wasn’t prepared for the entire world picking my body apart.”

At two hours, “Skin: A History of Nudity in the Movies” is everything you always wanted to know about sex in the movies but were afraid to ask.