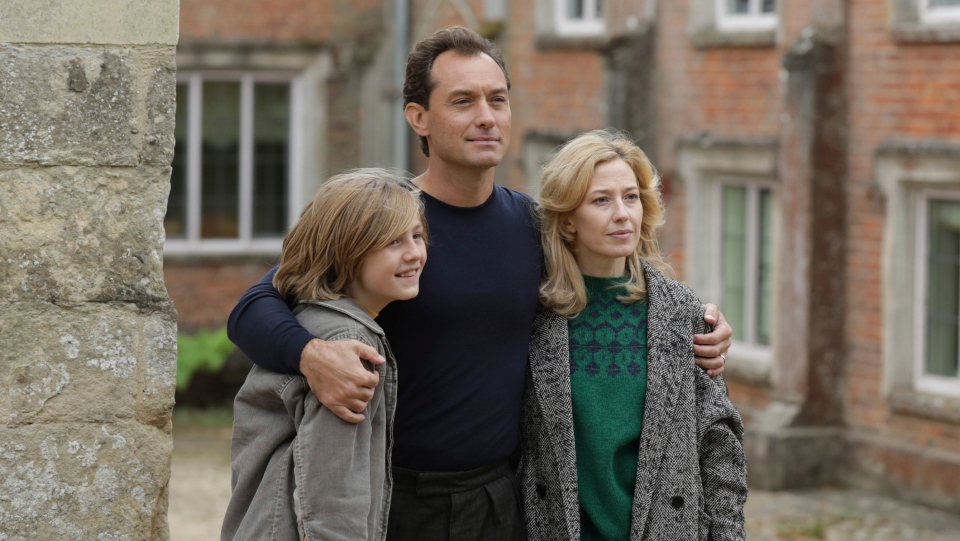 A twisty-turny story of greed and family set in 1986, “The Nest,” now playing in theatres, sees stars Jude Law and Carrie Coon as a happy, well off couple who define the old saying that looks can be deceiving.

When Rory is offered his old job in his native London, England, he sees it as the chance to make some big bank. He uproots the family, moves them to a huge manor house outside of London and turns on the money taps. He spends lavishly, against the promise of a big windfall, buying fur coats, building a horse stable for Allison and enrolling his kids in tony, private schools. Trouble is, the promised windfall never arrives and as Rory bleeds money, cracks form in his carefully curated life.

“The Nest” is a slow burn of a movie that dances to its own beat. The small details that chip away at Rory and Allison’s relationship are revealed slowly as the rot sets in. It’s a study of greed and privilege as a cancer that clouds Rory’s ability to truly define what is important in his life.

Law is perfectly cast. His natural movie star charisma and charm shines through until the symbols of the wealth he craves become a weight around his neck, removing whatever goodwill we may have had for the character. Equally as strong is Coon, whose breakdown is played out in more measured tones until she loses it in a crescendo of bitterness and anger.

The story allows them the room to fully investigate why and how Rory and Allison behave as they do but director Sean Durkin, whose “Martha Marcy May Marlene” was an arthouse hit in 2011, never completely gives away the game.

“The Nest” features textured storytelling and an open-ended finale that will likely inspire heated post-viewing conversation. 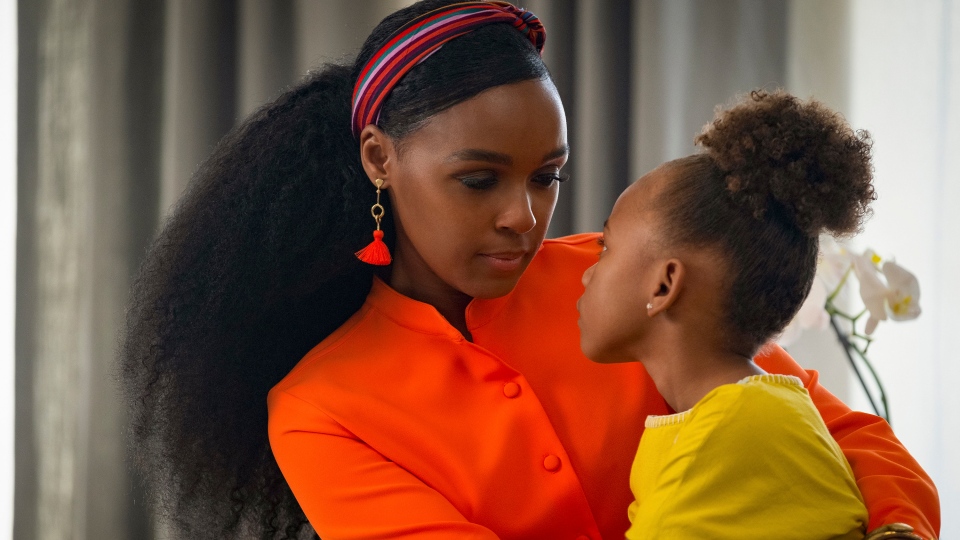 “Antebellum,” starring singer and actor Janelle Monáe in a dual role, is a horror film about the intergenerational impact of slavery.

At the film’s beginning Monáe is Eden, enslaved on a plantation at the onset of the Civil War. The plantation boss, Confederate Captain Jasper (Jack Huston), is a cruel drunk with a strict set of rules. He demands no talking and obedience “with a smile.” The cost of speaking out of turn or not working hard enough is misery. Forced to endure sexual exploitation, physical trauma, and mental anguish, one night Eden shuts her eyes and goes to sleep.

When she awakens it’s 2020 and she is Veronica Henley, a famous writer on American race relations with a busy schedule that includes television appearance and live speaking engagements. Her latest work, “Shedding the Coping Persona,” a roadmap to revolution for historically marginalized people, examining the intersectionality of race, class and gender, is a hot button book that touches on some of the same concerns that plagued Eden’s life.

“Black women are expected to be seen and not heard,” she says at a conference. “To the patriarchy we’ve been practically invisible but their arrogance is their greatest vulnerability and our greatest opportunity.” She closes her speech with a quote from Assata Shakur, “The only thing that we have to lose are our chains.”

Although successful, wealthy and well-known, she is treated with condescension from everyone from a white television host to a hotel concierge, from a ghostly little girl in an elevator to a corporate headhunter (Jena Malone) who gives her kudos on her lipstick choice. “It compliments your skin tone,” she says. “I don’t think I could… pull it off.”

Eden and Veronica have a connection, brought forth in a ferocious climax, but there will be no spoilers here.

In a “Twilight Zone” finale “Antebellum” asks if Eden was a figment of Veronica’s imagination or vice versa. It’s hard to describe without giving anything away but the writing-directing duo of Gerard Bush and Christopher Renz have done some of the work for me, foreshadow the ending throughout. For instance, at one point Veronica tells her friend Sarah (Lily Cowles), “Our ancestors haunt our dreams to see themselves more.”

“Antebellum” is a horror film that doesn’t rely on jump scares to raise the hairs on the back of your neck. Instead, with a tip of the hat to Rod Serling, it blends social commentary on the legacy of American slavery with the supernatural to form a provocative essay on how the unresolved past can create turmoil in the present. 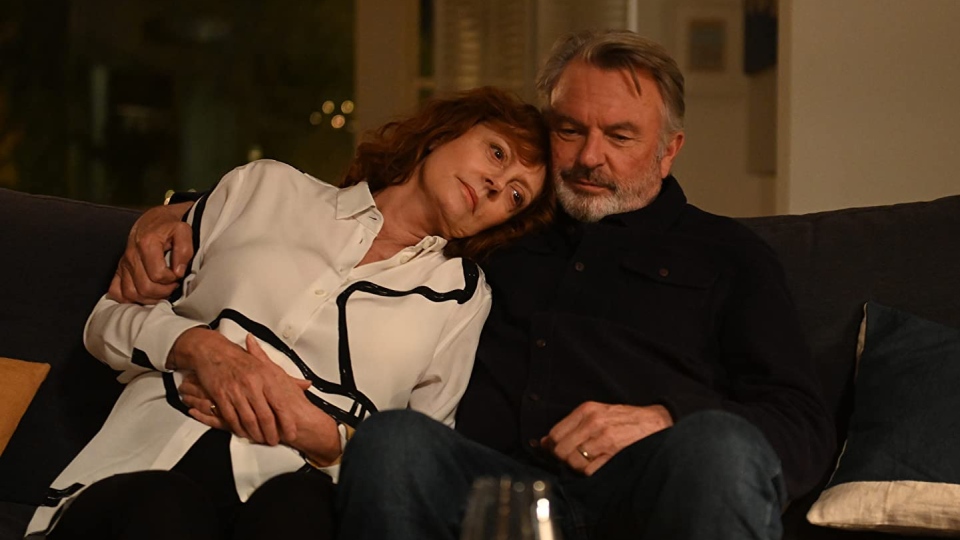 “Blackbird,” the new Susan Sarandon end-of-life drama now on VOD, is a remake of the 2014 Danish film “Silent Heart.” Equal parts heartbreaking and humorous, it’s a movie whose humanity is first and foremost.

Sarandon is Lily, a vey sick woman whose body has betrayed her. Her long battle with ALS has taken the use of one of her arms and she struggles to maintain her dignity in the face of ever declining health. A self-diagnosed A-type personality, Lily has made the decision to end her life on her own terms. With her husband Paul (Sam Neill) she has arranged one last weekend with the family, a celebration of life complete with holiday traditions.

Lily has found a sense of comfort in her decision, but as the fateful time nears, unresolved issues arise as the children reveal they may not be accepting of her choice.

“Blackbird” is an end-of-life drama, bold in its presentation of delicate matters, that never dips into soap-opera sentimentality. With sensitivity and unexpected humor director Roger Michell transcends the disease-of-the-week genre, staging intricate scenes that allow for drama and discourse.

A Christmas dinner scene, for example, begins as a lighthearted gathering. It’s funny, warm, even romantic but deepens into something else as Lily gifts some of her prized possessions to family members.

“I haven’t taken this bracelet off in 22 years,” she says, passing it along to her daughter. “I’ve never taken this wedding ring off.”

It could have dipped into melodrama but Sarandon, in a tremendous performance, never allows the scene to become maudlin. It’s incredibly sad and for the members of her family, and for the viewer, it’s the moment when Lily’s decision to say goodbye becomes heartbreakingly real.

All the action in “Blackbird” happens inside Lily and Paul’s beautiful home, a powerful architectural presence that almost becomes a character on its own. On the downside the limited setting gives the movie a stagey feeling, as though we’re watching an elaborate play instead of a movie.

The lack of backgrounds, however, helps focus on the issue at hand. “Blackbird” doesn’t debate the ethics of assisted suicide or wallow in any sort of moral quandary. Instead, it celebrates life in all its multi-faceted and messy glory as the characters approach Lily’s end of life in their own, unique ways.

In its examination of the end-of-life “Blackbird” packs an emotional punch, illuminating not only Lily’s end but the entirety of a precious life well lived. 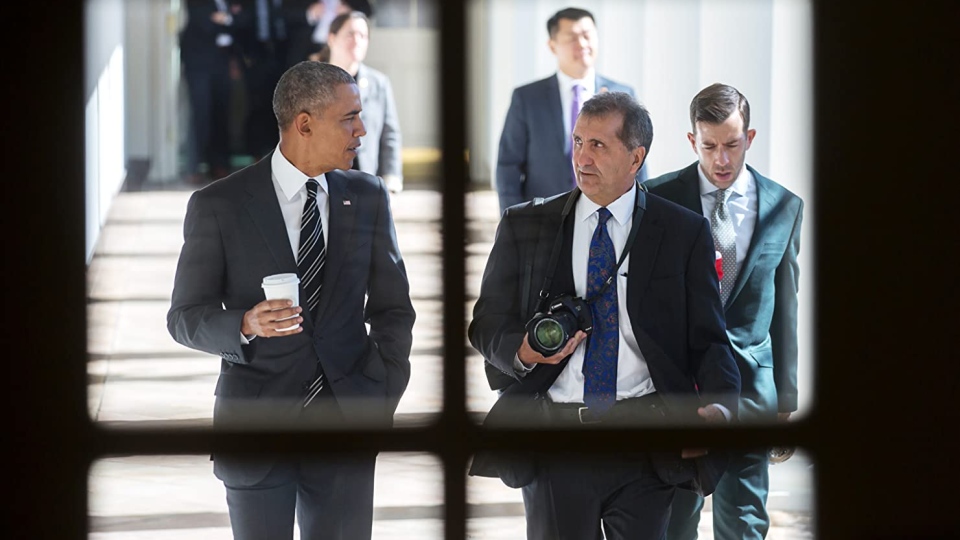 As Chief Official White House Photographer for two U.S. Presidents, Pete Souza had an up-close-and-personal look at the hallways of power and the men who walked them. “The Way I See It,” a new documentary now on VOD, captures a detailed behind-the-scenes profile of power and the responsibility that comes along with the office.

Souza’s photography career began in the 1970s at local news outlets before he made the leap to working for major outlets like the Chicago Sun-Times, National Geographic Magazine, and Life Magazine. In June 1983, he became the official White House photographer for President Ronald Reagan, capturing intimate portraits of the President and wife Nancy in and out of the Oval Office for the next six years.

A stint as photojournalist for the Chicago Tribune Washington, D.C., bureau followed and in 2001 he was in the first wave of journalists to cover the war in Afghanistan and the fall of Kabul.

In 2004, Souza covered Barack Obama's first year as a U.S. senator and then, after the 2008 election, he began a project “to create the best photographic archive of a president that had ever been done.”

In his second stint as official White House photographer he spent thousands of hours alongside President Obama and family, creating an archive of revealing, personal photographs that form the backbone of the first half of “The Way I See It.”

Using archival footage, hundreds of Souza’s pictures, talking head interviews with people like former Deputy National Security Advisor Ben Rhodes and former U.S. Ambassador to the UN Samantha Power, and snippets of Souza at a live speaking engagement, director and producer Dawn Porter follows the photographer’s career in the White House and beyond. These reveal Soouza to be an engaging character, laughing at his own jokes and welling up when he speaks of Obama’s tender treatment of the parents of the Sandy Hook victims.

In civilian life, Souza has become an unlikely social media star, earning the nickname King of Shade for the snarky captions he uses to reply to Trump tweets. It’s made the formally apolitical photographer a social star and inspired a book called “Shade: A Tale of Two Presidents” that collects juxtaposes Souza’s Obama pictures against what he sees as the abuses of power and negative policies of the current administration.

“The Way I See It” is Souza’s story but the larger picture it paints is one of the importance of photography. If a picture is worth a thousand words this movie speaks volumes. Souza’s photos capture the hope and empathy that characterized the Obama years in stark contrast to the anxiety that surrounds the current election season. The photos tell the tale, for now and posterity.

Movie reviews: 'The Secrets We Keep' a gritty film about trust, survivor's guilt, and secrets

Movie reviews: 'On the Rocks' is laugh out loud funny, for a time anyway