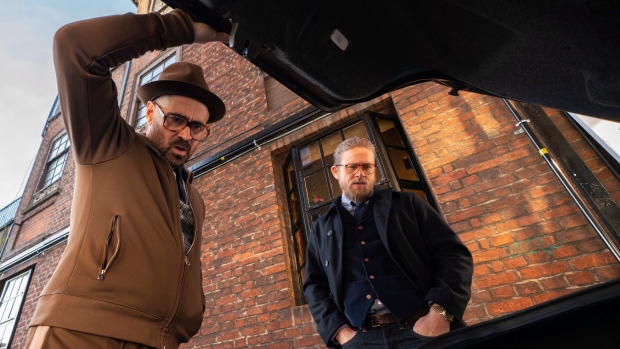 Anyone who thinks the Guy Ritchie of old has disappeared, crushed under the weight of the huge box office grosses of the family-friendly “Aladdin,” need look no further than the blood splattered pint mug of “The Gentlemen’s” opening scene for proof to the contrary.

Highly stylized crime comedies like “Lock, Stock and Two Smoking Barrels” and “Snatch” made Ritchie the king of fast-paced, politically-incorrect stories of life on the streets. The big budget movies, his Sherlock Holmes series and “Aladdin,” among others, made more money, but lacked the visceral thrills of his early work.

His new film, “The Gentlemen,” starring Matthew McConaughey, Henry Golding, Michelle Dockery, Colin Farrell and Hugh Grant, feels like a hybrid of the two phases of his career. A spiritual cousin to “Lock, Stock” and ”Snatch,” it brings Ritchie back to London’s underworld, a place populated by Saville Row suit-wearing tough guys, ruthless tabloid editors and henchmen who speak like down-on-their-heels Oxford drop outs.

Matthew McConaughey is Mickey Pearson, an American who built a weed empire in his adopted home country of England. Intelligent and ruthless—qualities matched only by his wife Rosalind (Dockery)—he’s now middle-aged and looking to cash out. His offers to sell the business to billionaire drug lord Matthew Berger (a very mannered Jeremy Strong) for $400 million attracts unwanted attention from Dry Eye (Golding), the ruthless youngest nephew of an aging crime lord.

There’s more, but this is a pretzel of a story, twisted and tied in knots.

“The Gentlemen” is not a sequel or a reboot but it feels like one. The hyper-masculine story telling style, inventive use of swear words and spider-web plotting, while audacious, will be very familiar to Ritchie-philes. It’s “Snatch 2.0” with the same kind of big name cast who seem to be having fun mouthing Ritchie’s profanity laden dialogue but no amount of fast cutting and fast talking can replace real energy. As rock ‘n rolling as the filmmaking is, the story acts as an anchor, bogging things down as it gets more and more convoluted.

It’s too bad because Ritchie takes pains to create the very specific world his characters inhabit, and it is a colourful place but it seems that he never met a plot twist he didn’t love. As the plot thickens, and it does thicken almost to the point of impenetrability, the movie begins to feel overstuffed. To help the audience along Ritchie binds everything together with a silly framing device involving Fletcher (Grant), a private eye/blackmailer who unfurls the complicated story to Pearson’s right-hand-man Raymond (Charlie Hunnam). It’s time consuming and adds little to the picture except for Hugh Grant’s exaggerated accent as he delivers flowery lines like, “Our antagonist explodes on the scene, like a millennial firework.”

“The Gentlemen” feels like an exercise in nostalgia, back to an era of Ritchie’s frenetic jump cuts and outdated attitudes about race disguised as quippy dialogue. “The Last Full Measure” is the story of two men who are driven by a sense of duty to people they never met.

Based on a true story of bravery during one of the “bloodiest days” of the Vietnam War, the movie begins thirty-two years later when Pentagon staffer Scott Huffman (Sebastien Stan) takes a meeting with Master Sergeant Thomas Tully, Air Force Rescue, retired (William Hurt). Tully wants Huffman’s help to posthumously upgrade U.S. Air Force Pararescuemen William H. Pitsenbarger’s (Jeremy Irvine) Air Force Cross medal to a Medal of Honor, America's highest and most prestigious personal military decoration. Huffman, an ambitious Department of Defence lawyer, thinks it is a waste of time but is ordered to, “take a few days and collect some war stories,” by his boss Carlton Stanton (Bradley Whitford).

His research connects him with survivors of the battle, U.S. Army's 1st Infantry Division soldiers Takoda (Samuel L. Jackson), Burr (Peter Fonda) and Mott (Ed Harris), men whose lives were saved by Pitsenbarger. At first he regards their stories as an exercise in “post traumatic exorcism” but soon comes to realize that Pitsenbarger made what Abraham Lincoln called “gave the last full measure of devotion” to help men he didn’t know. By bravely inserting himself into the middle of an ambush he saved over sixty soldiers, losing his life in the process and yet was not awarded the military’s highest honor.

With the support of Pitsenbarger’s parents (Christopher Plummer & Diane Ladd), Huffman risks his professional life to go on a journey of self-discovery and uncover a conspiracy that extends to the highest reaches of power at the Pentagon.

Told in flashbacks to the fateful day on the battlefield, “The Last Full Measure” is part detective story, part examination of what it means to be a soldier. Huffman’s interviews reveal men troubled by the events of a life time ago, riddled with PTSD, unable to sleep or function in regular society. Tully, in particular is wracked by survivor’s guilt, the feeling that he didn’t do enough while Pitsenbarger gave his all. These scenes aren’t subtle but what they lack in finesse they make up for in sheer thought-provoking power.

The film’s strength may be as a conversation starter regarding the psychological price soldiers pay when they return from war. But as well-intentioned as the film’s messages of respect for the sacrifices of the fallen are, “The Last Full Measure” succumbs to melodrama at almost every turn. Clichéd, tough guy dialogue and characters that feel more like a collection of tics than actual fully rounded people, detract from the film’s serious message.

Based on a 1927 science fiction/horror story by H. P. Lovecraft, “Color Out of Space” is a strange film starring everyone’s favorite purveyor of strange performances, Nicolas “Dad’s been acting weird” Cage.

Cage is Nathan Gardner, a former artist living on his late father’s remote farm near the fictional town of Arkham, one of Lovecraft’s favorite settings. His family, Wiccan practitioner Lavinia (Madeleine Arthur), weed aficionado Benny and youngster Jack (Brendan Meyer and Julian Hilliard) and mother Theresa (Joely Richardson), leads a quiet if unconventional life until late one night when a meteorite crash lands on their front lawn. Unsure of what it is, Nathan calls the police. “I’m sorry about the smell,” he says. “Can you smell it? It’s like somebody lit a dog on fire.”

The smell will turn out to be the least of his problems.

The meteorite disappears over time but the effects of the crash landing linger. The Gardeners and their animals—they raise alpacas—begin acting strangely. Mom cuts her own fingers off as psychedelic hallucinations shroud the family’s thoughts. Hydrologist Ward (Elliot Knight), in the area surveying for a future dam project, thinks the water is poisoned but the real answer is a little more out there, as in outer space alien brain, out there.

Directed by Richard Stanley, who hasn’t made a feature since infamously being fired from 1996’s “The Island of Dr. Moreau,” “Color Out of Space” is a trippy, darkly humorous descent into madness. Lovecraft has proven tricky to adapt to the screen but Stanley does a good job here, building a sense of unease with a clever mix of CGI and practical special effects that build upon the natural disorienting nature of the story. Add to that body horror and cosmic terror, each heightened by the committed—read unhinged—performances from the leads and you have a movie that keeps the viewer as off-kilter as the characters they are watching.

“Color Out of Space” is a little uneven, cramming too many ideas into the mix, but the mix of two gonzo artists like Cage and Stanley offers up an movie that amps up the cinematic anxiety in unpredictable ways.