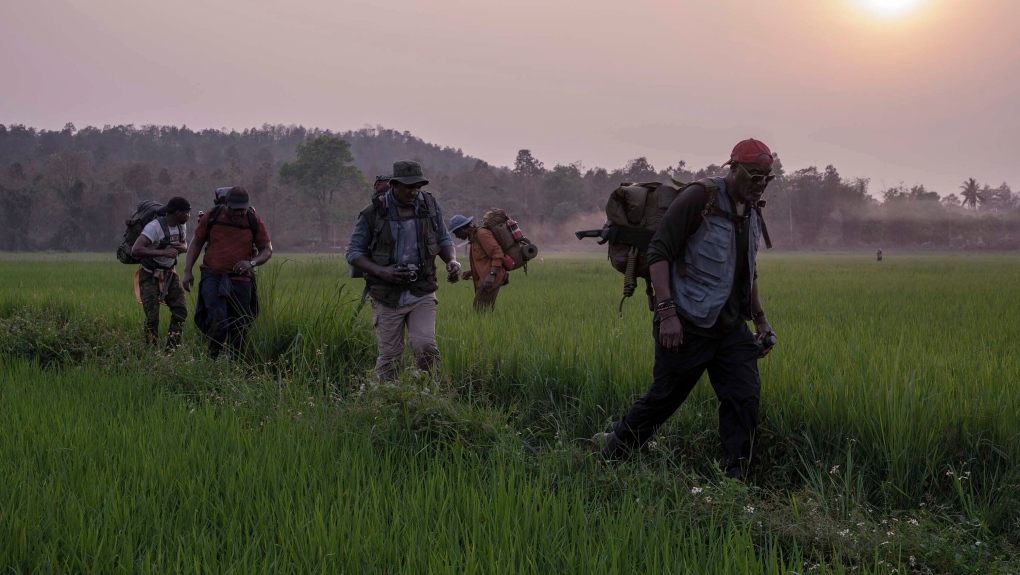 This image released by Netflix shows a scene from the Spike Lee film "Da 5 Bloods." (David Lee/Netflix via AP) 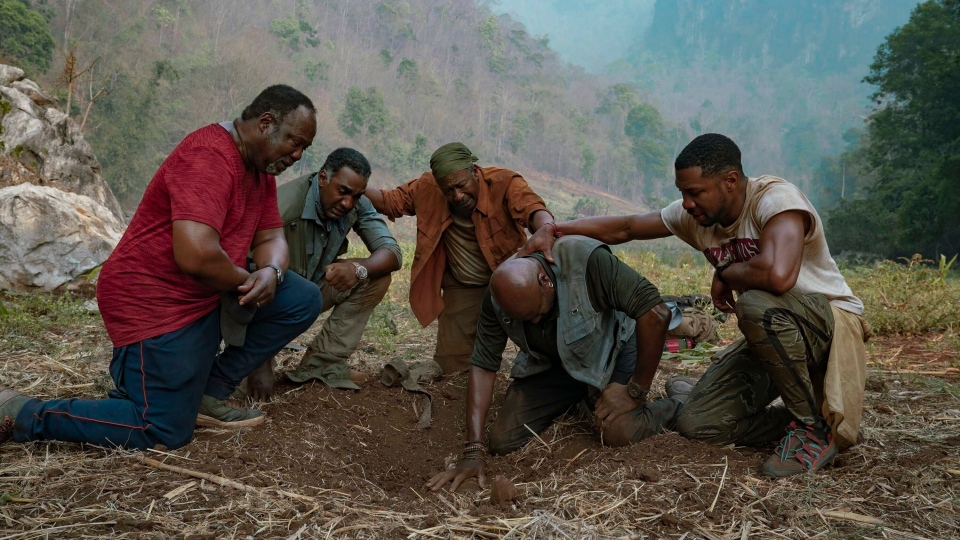 Spike Lee movies are like onions. Peel off a layer and there’s a new one beneath. Take that off and another reveals itself. His latest, “Da 5 Bloods,” now streaming on Netflix, is even more multi-faceted than usual.

The director calls it a “gumbo,” a rich stew of varied ingredients. It’s a two-and-half-hour Vietnam War legacy film featuring a Trump supporter in a leading role. It’s a searing look at how African American soldiers fought in a war for a country that didn’t support them and it’s an adventure film, à la “The Treasure of the Sierra Madre” with action scenes and even buried treasure.

Most of all, it feels like a film that only Spike Lee, the auteur, could have made.

It’s a noble mission indeed, but there’s more. A lot more in the form of CIA gold bars intended as bribes for the Vietnamese government but hijacked by the Bloods and hidden in the jungle. “We’ve been dying for this country from the very get,” says Norman in a flashback. “We give this gold to our people.”

It seems like a foolproof plan but almost as soon as the men land in Vietnam they are beset with problems, some new, some a product of their past. “Being back here is not easy,” says Paul.

“Da 5 Bloods” weaves archival footage of Rev. Dr. Martin Luther King Jr., Muhammad Ali, Angela Davis and Kwame Ture among others, and 60s era music into the narrative, creating a vivid portrait of time and place. Add to that a study of the effects of PTSD, political corruption and some interpersonal politics between the main characters—including Jonathan Majors as Paul’s estranged son David—action scenes and a slimy banker (Jean Reno) and you have a big, bold movie that aims to entertain and reckon with social issues that linger years after the Vietnam War ended.

“Da 5 Bloods” explores areas of the African American experience in Vietnam that have never been exclusively the subject of a film. Lee and co-writer Kevin Willmott, with whom the director shared an Academy Award for Best Adapted Screenplay for “BlacKkKlansman,” have crafted a poignant, if slightly overlong, look at the lasting effects of fighting a war for freedoms the Bloods and their counterparts were being denied at home. “Black GI,” taunts propagandist Hanoi Hannah (Van Veronica Ngo) on Radio Hanoi, “is it fair to serve more than the white Americans who sent you here?”

“Every time I walk out my front door I see cops patrolling my neighborhood like it’s some kind of police state,” Stormin’ Norman says, circa 1971. “I can feel just how much I ain’t worth.”

The pain and anger in those words, and in this film, is undiminished by the passing years.

THE KING OF STATEN ISLAND: 3 ½ STARS 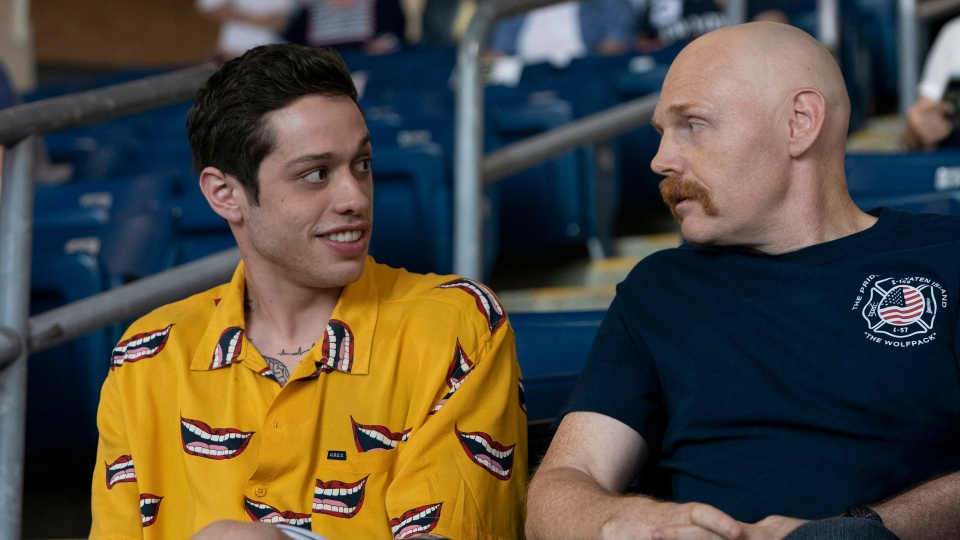 For six seasons on “Saturday Night Live” Pete Davidson has tempered humour with acute candor to forge a deeply personal kind of comedy based on his life experiences. His new film, “The King of Staten Island,” now on VOD, is his most self-confessional work yet.

Davidson plays Scott, a semi-fictional version of himself, as a directionless twenty-four-year old still living with his widowed mother Margie (Marisa Tomei).

When he was seven his firefighter father was killed in the line of duty, leaving a wound on Scott’s psyche that has never healed. He’s so skinny and pale with such large dark circles under his eyes his on-and-off girlfriend Kelsey (Bel Powley) says he “looks like an anorexic panda,” and his patchwork of random tattoos leads a friend to call him a “human sketchbook.” He dreams of one day opening up a restaurant-slash-tattoo parlor but spends most of his time smoking weed and hanging out with his childhood pals.

When Margie becomes romantically involved with Ray (Bill Burr), a firefighter with a hair trigger temper, it forces Scott to confront the past tragedy in his life so he can move forward.

“The King of Staten Island” is an imagined version of Davidson’s life if he hadn’t found comedy and become famous. His father Scott was a member of Ladder Company 118 in Brooklyn Heights and died responding to the terrorist attacks of Sept. 11, 2001. That loss has become the bedrock of his work and provides the emotional backbone of this film.

Director Judd Apatow is no stranger to making films with big hearts and dirty mouths. Like his previous films, like “Trainwreck,” he frontloads the story with outrageous laughs that slowly give way to a funny but more restrained resolution.

Along the way Davidson delivers a performance that lifts his patented millennial slacker routine to a new level. He’s a natural performer, charismatic and likeable, with a deep well of emotion that lies just beneath his pothead exterior. He’s a perfect vessel to tell a story about someone experiencing profound loss.

The supporting cast is terrific. Burr embodies the ragehead with a heart of gold, drifting through life while Tomei has an interesting arc as a woman who lets go of the past to find a new future.

The premise of “The King of Staten Island” doesn’t sound like the stuff of comedy but this story of how tragedy effects a family balances humour with heartfelt and humanistic observations in a very winning way. 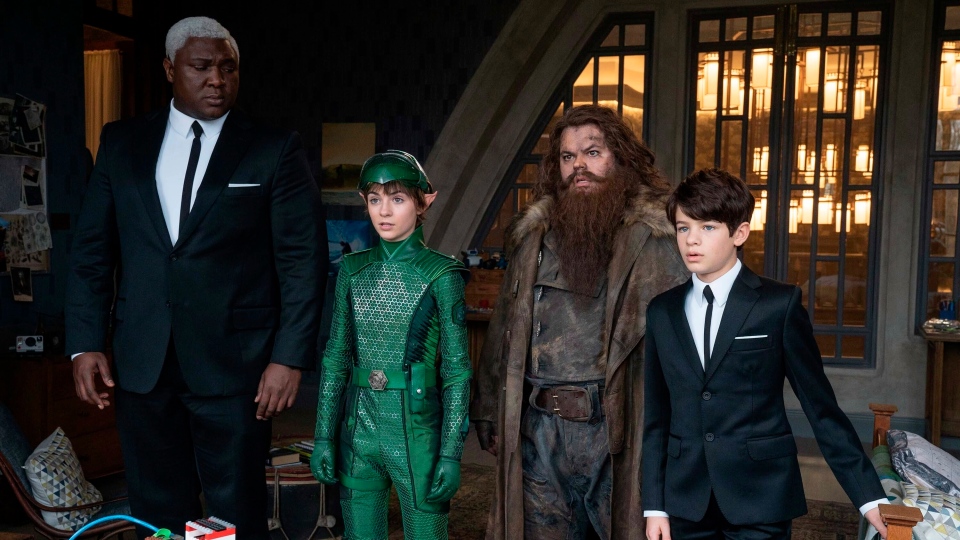 “Artemis Fowl,” a fantasy film streaming on Disney+, is brand spanking new but there’s a feeling of déjà vu that hangs over the entire film. Adapted from the beloved books by Eoin Colfer, the movie feels like an expensive mix-and-match of “Harry Potter” and “Lord of the Rings.”

Newcomer Ferdia Shaw is Artemis Fowl Jr., a poor little rich kid and budding criminal mastermind with the sartorial sense of Will Smith in “Men in Black” and an IQ that would give Einstein a run for his money.

When his father (Colin Farrell) is kidnapped, the youngster, along with his trusty bodyguard Domovoi Butler (Nonso Anozie), and some help from elf reconnaissance officer Holly Short (Lara McDonnell) and Josh Gad as Hagrid wannabe Mulch Diggums, sets off on a quest to locate him. To pay the kidnapper’s ransom Artemis and Company must infiltrate the mysterious underground world of fairies, led by Commander Root (Judi Dench), and take charge of the Aculos, the fairies’ most coveted magical apparatus. “Artemis,” says Domovoi, “it’s time to face your destiny.”

Question is, Will young Arte’s brains be a match for their fairy magic? There’s more but further details involve major spoilers.

Fans of the books take note, “Artemis Fowl’s” origin story takes liberties with the books. Both Holly Short and Mulch are allies from the get-go and daddy Fowl didn’t turn up until the second book in the series.

Structural changes aside, the film adaptation lacks much of the charm of Colfer’s writing. It does capture Artemis’ growth from innocent unaware of the world of magic and intrigue his father operates in, to almost anti-hero, but despite large scale set pieces and many action scenes it feels been there, done that.

Director Kenneth Branagh has crafted a handsome but generic fantasy film, complete with “Avengers” style special effects and a sweeping soundtrack that feels like the set-up to a franchise and not a stand-alone story. If you don’t believe me, check out Artemis’ last line in the movie. “We have some unfinished business.” It’s like a ninety-minute trailer for the next installment.

“Artemis Fowl” may survive to have more on-screen adventures, perhaps filling the hole for fantasy fans left by the absence of “Harry Potter” movies, but next time around fewer special effects and more personality would help. 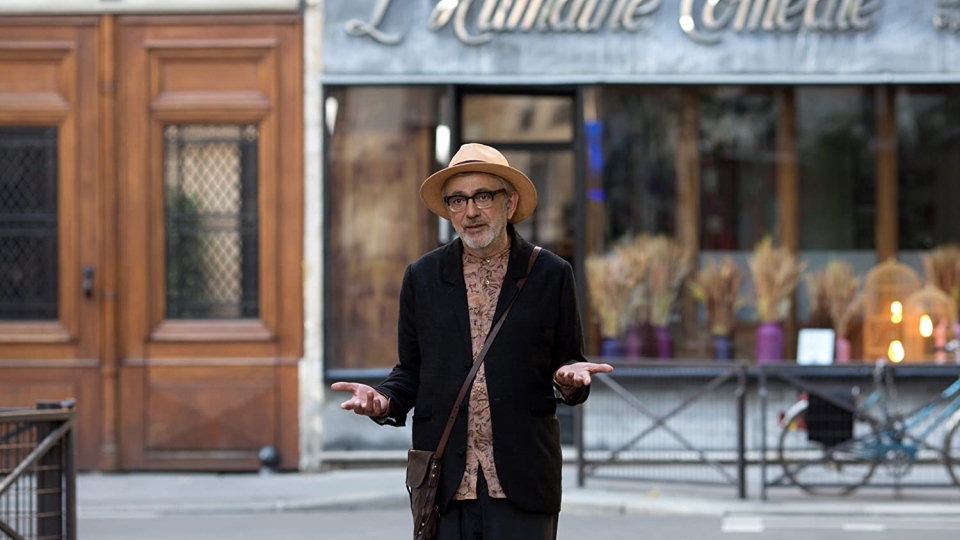 Palestinian actor/director Elia Suleiman has made a career of exploring his national identity. In his new film, “It Must Be Heaven,” he continues on that trajectory by visiting New York and Paris. In one scene Suleiman, starring as a character known as ES, pitches the very movie we’re watching to a Parisian film producer (Vincent Maraval) who rejects the idea with a scoff.

“It’s not Palestinian enough,” he says. “It could take place anywhere, even here,” which, as it turns out, is the entire idea behind the story.

ES is a deadpan, mostly silent Mr-Bean-by-way-of-Charlie-Chaplin character who lives in Nazareth. He’s the star of a series of vignettes, each featuring slice-of-life situations. A neighbour steals lemons from the tree in his yard.

“Don’t think I’m stealing,” the man says. “I knocked on the door, but nobody was there.”

In New York he encounters heavily armed people in a Brooklyn grocery store—complete with ammo belts spilling out of baby carriages—and while in Paris there’s a sparrow who flies through his Paris window and hops on his keyboard as he tries to write.

Each disconnected story fragment uses surreal humour as an allegory to illuminate the politics and conflicts of his home but the further he travels the more he realises that the ills of his homeland are universal ailments, not specific to his home.

“It Must Be Heaven” is a finely crafted, unique movie that revels in its absurdity. Suleiman is a keen observer, both as a director and the film’s star. He spends a great deal of the movie watching the action around him, inviting us, as the viewer, to watch and learn with him. He welcomes us to observe and decode the situations with him, gently easing us into his new, expanded world view.