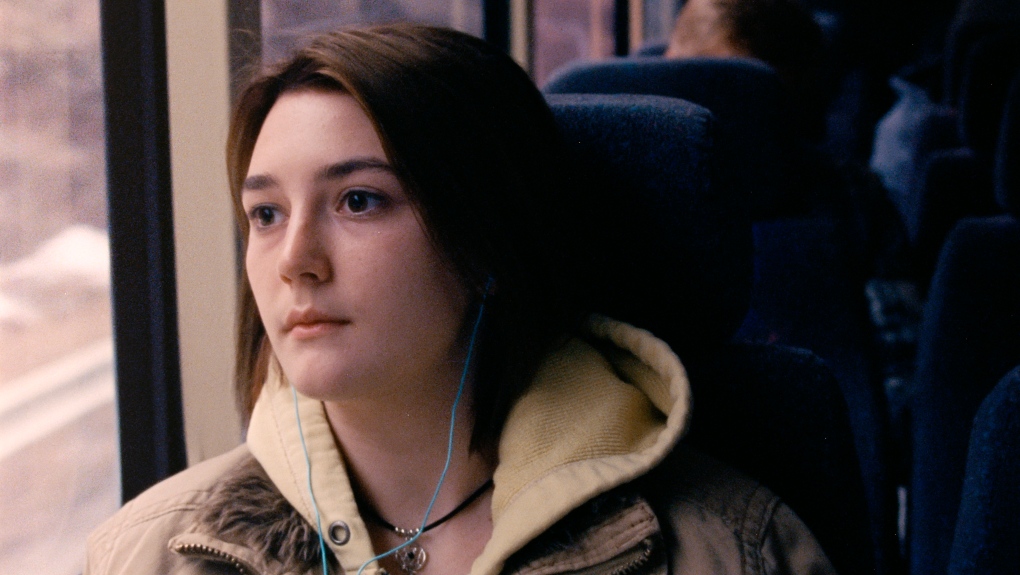 “Never Really Sometimes Always” is being billed as an abortion drama but is really a story of class, gender and the bond between two young women.

When we first see 17-year-old Autumn (Sidney Flanigan) she is performing at a school talent show. As she nervously sings a song called “He Makes Me Do It” she is confronted by indifference from her step-father (Ryan Eggold) and heckles from her male classmates. What her parents and friends don’t know is that Autumn suspects she is pregnant. A visit to the crisis pregnancy center in her rural Pennsylvania town confirms her fears.

“If it is positive is there any way it could be a negative?” she asks as the pregnancy test returns a result. Told she is ten weeks along, the nurse shows her a VHS tape that begins with a dramatic voiceover.

“The horrible truth is that abortion is an act of violence against the baby.”

As Pennsylvania law requires women under 18 to receive parental permission before having an abortion, Autumn and her cousin Skylar (Talia Ryder) hop a bus across state lines to a clinic in Brooklyn, New York. Alone in an unfamiliar city, the two must rely on one another as obstacles are placed in their way.

“Never Rarely Sometimes Always” is a quiet, keenly observed movie that avoids the pitfalls of pathos to present a story on the topic of bodily autonomy. Stark and naturalistic, it relies on subtlety and nuance to comment on a topic that is frequently the subject of histrionics. Director Eliza Hittman allows Autumn’s anxiety to be the focus of the story, giving us a powerful, nonjudgement window into the inner workings of her decision.

The title is key to one of film’s most riveting scenes of emotional honesty. At the NYC clinic she is asked to answer a series of questions like, “Has anyone made her have sex against her will?” regarding her sexual history and partners. Each is answered with one word, never, rarely, sometimes or always. As the questionnaire continues the scene becomes fraught with meaning as each answer brings up a wellspring of feelings in Autumn.

If there is a downside here it’s that “Never Rarely Sometimes Always” relies so heavily on the unsaid. The unspoken nature of the relationship between Autumn and Skylar reveals the deep bond they share—they often communicate through looks and body language—but occasionally feels too spare in longer scenes. That being said, their relationship is a thing of beauty as they find strength in one another in good times and bad.

JAMES VS HIS FUTURE SELF: 3 ½ STARS

In the early moments of “James Vs His Future Self, a metaphysical rom-com starring Jonas Chernick, a character named Dr. Rowley (Frances Conroy) encapsulates the film’s premise.

The story of changing your worst nature before it’s too late begins with physicist James Dolensky (Chernick) obsessed with his work. The only thing he gives a second thought to, other than his work, is his wannabe love-interest, scientist Courtney (Cleopatra Coleman).

“Science is what I’m meant to do,” James says.

Trouble is, Courtney is considering taking a job at CERN in Switzerland and if James doesn’t do or say something soon he may never see her again.

That’s when things get trippy. Enter a taller, larger version of James—“Time ravel does things to you.”—played by Daniel Stern.

Current James is all in working toward presenting his ideas at a conference while Future James sees the whole picture from the perspective of a life lived.

“You do not want this life,” he says. “You don’t have a clue. There is a reason I came back now. I’m still sort of a good guy when I’m you. You take that position and that is doomsday. Your ego, your self-righteousness is going to smother all the other parts of your life. Life. Love. Joy. Family. I came back to stop you from making that mistake, one way or the other.”

Despite the time travel angle the film’s message is pretty clear. Wherever—or maybe in this case, whenever—you are, be all there. Chernick and co-writer Jeremy LaLonde (who also directed) mix it up with scientific jargon about the uncertainty principle and Schrödinger's cat, but at its heart “James Vs His Future Self” is a story about chemistry, not in a lab but between people.

“James Vs His Future Self” doesn’t get messed up in the details of time travel. Wisely choosing to concentrate on the characters and the love story it allows the fully formed and interesting characters to do what they do without getting bogged down by the scientific wonkery. Chernick brings brains and nerdy vulnerability to Current James. Coleman transcends being simply a love interest to create the character who really drives the action, but it is Stern who makes the biggest impact.

In his biggest role in years Stern brings it. Future James is a piece of work, a man who knows how high the stakes are and who will do almost anything to put Current James on the right track. It’s a wonderfully unhinged performance that gives the movie some real spark.

“James Vs His Future Self” takes a rom com premise and infuses it with just enough invention and charm to create a timeless romance.

“Flipper,” the lovable dolphin of 1960’s television, as the song goes, lived “in a world full of wonder, flying thereunder, under the sea.” For a new generation, who want their underwater shows in glistening Technicolor comes Echo, a bottlenose Pacific dolphin and star of “Dolphin Reef,” Disneynature's new documentary premiering this week on Disney+.

Narrated by Natalie Portman and populated by underwater creatures that look as though they sprung from the imaginations of Disney’s animators by way of H.P. Lovecraft, “Dolphin Reef” is the educational but cutesy story of life on a Pacific Ocean coral reef.

The star, Echo, is a rambunctious youngster learning the ropes of life on the reef from mother Kumu. The high-spirited calf, however, is more interested in adventures and exploring his world full of wonder than learning how to stay safe and contribute to the pod.

It’s easy to see how Echo’s eye could wander down there. Director Keith Scholey captures the vivid beauty and otherworldly weirdness of life in Echo’s ecosystem. There are the deadly cuttlefish whose skin strobes different colours as they attack and the phenomenon of “sand poop,” which is exactly what you think it is.

A close-call or two, however, gives Echo the push he needs to become an adult.

“Being locked in an ocean at night gives you a whole new appreciation for your mother,” Portman says. “It has been a huge wakeup call for Echo. Time has run out. He can simply not rely on Kumu to protect him anymore. He must learn to take care of himself, once and for all.”

Along the way are lessons in how dolphins build communities and use their unique physiologies to protect their pods. We learn about synchronized sleeping—one hemisphere of the brain sleeps while the other hemisphere remains awake—and their skin’s antibacterial properties, which may help stop infections in open wounds. It’s an interesting, accessible nature lesson wrapped in an aquatic coming-of-age story, although one or two of Echo’s close scraps with mortality may be too intense for very young children.

Portman’s narration runs from folksy—"Here’s how the whole reef thing works in a nutshell…”—to serious and sympathetic when the tone of the film changes.

“Dolphin Reef” may not be as action packed as an episode of “Flipper”— Echo does not help solve crimes or do a “tail walk”— but its beautiful cinematography and engaging storytelling make its message of interconnected community—whether marine or human—resonate.

“They rely on their extended family for comfort, safety and survival,” Portman says in the film’s final moments, “and now they need to rely on us as well. Their world is our world.”

There is something elemental about “Elephant,” the new Disneynature's new documentary premiering this week on Disney+.

Narrated by Meghan Markle (billed as Meghan the Duchess of Sussex), who donated her fee to the Elephants Without Borders conservation charity in Botswana, the doc is a story about an unbroken chain of knowledge stretching back for millennia and an elephant’s ability to connect to its community and ancestors, wrapped up in Disneynature’s slick presentation.

The film focusses on 50-year-old matriarch Gaia, her younger sister and heir apparent Shani, baby nephew Jomo, and their migration, with their herd, across hundreds of miles across the vast Kalahari Desert in search of water at the Zambezi and Victoria Falls. It is an epic journey, a quest their ancestors have taken for thousands of years. The key to the trip’s success is Gaia’s elephant memory, an instinct that will point them in the right direction, from watering hole to watering hole until they reach their destination. As well as leading the herd, Gaia, we’re told, senses the presence of water through her feet.

The film’s drama comes in several forms. First are the natural problems, like persistent predators i.e. lions and hungry crocodiles, Gaia’s rescue of a drowning calf and a lack of water. On an interpersonal level, Gaia’s health is at risk. She is on her sixth and final set of teeth are worn and it is difficult for her to eat and she is fading.

Like all the Disneynature docs Gaia, Shani and Jomo are anthropomorphized. They don’t speak à la “The Lion King” but Markle’s narration often puts words and thoughts into their heads that forward the story but sometimes step over the line of documentary and into the world of speculation. For instance, when Markle suggests “Gaia remembers these birds leading her mother to the water,” it feels unnecessary. There is enough drama with predators and rival elephant herds without amping up the experience with supposition.

That aside, “Elephant” directors Mark Linfield, Vanessa Berlowitz and Alastair Fothergill do a wonderful job of allowing the visuals to tell the tale. Beautiful aerial shots and on-the-ground photography is both sweeping and intimate, providing an exciting, if deliberately paced, glimpse into a little seen world.