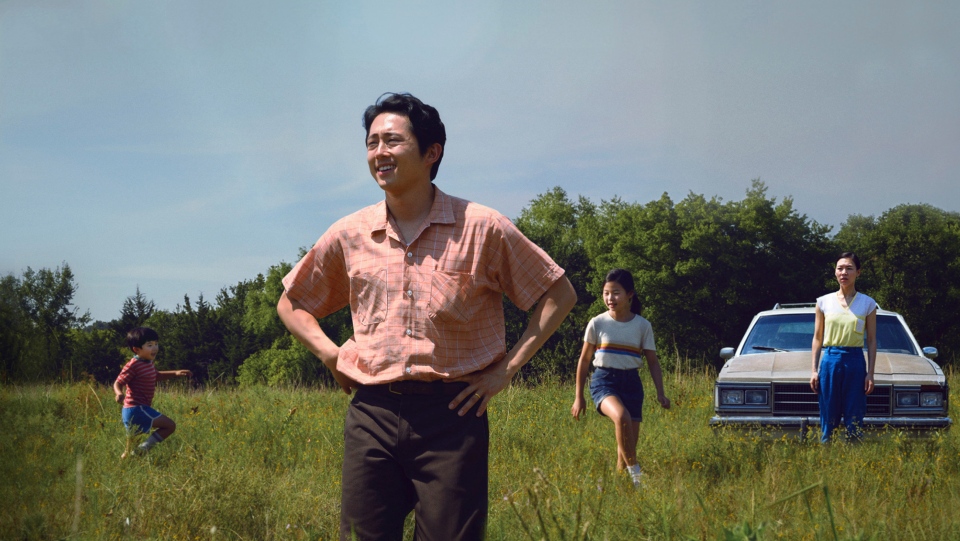 A nomination for a Golden Globe Award as Best Foreign Language Film should help “Minari,” now on premium digital and on-demand, the boost it deserves to find a wide audience. Simultaneously intimate and emotional, it is an authentic coming-of-age story about the resilience of the human spirit.

Drawing on his own personal experiences director Lee Isaac Chung has crafted a story about the Yi family, the Korean born mother and father, Jacob (Steven Yeun) and Monica (Yeri Han), and their American born kids Anne (Noel Kate Cho) and David (Alan Kim). Dreaming of a better life, they relocate from California to start a food business in rural Arkansas. Buying a plot of land, he plans on growing Korean produce to sell in the tri-state area.

It’s a tough go. Water is scarce, particularly after Jacob declines the services of a local dowser in favor of trying to find his own source. To make ends meet Jacob and Monica take on jobs at a local hatchery, but the long hours, coupled with David’s heart condition, bring trouble at home. To ease the tension Monica’s mother Soonja (Yuh-Jung Youn) comes from Korea to lend a hand.

She’s a handful, not a “real grandma” says David. But her swearing, love of wrestling and life brings some much-needed spark to the Yi’s new trailer home. Best of all, her antics help David find his way from shy little boy, whose mother coddles him, to fun loving kid.

“Minari,” in English and Korean with subtitles, is a carefully observed movie. The look on Monica’s face when she sees her new home for the first time is a subtle but devastating. Grandma’s easy laugh is infectious and David’s reactions to his grandmother—“They don’t swear! They don’t wear men’s underwear!”—are funny in a wistful kind of way. Even farmhand Paul’s (Will Patton) eccentric religious beliefs are treated compassionately and never ridiculed, even when Jacob can’t understand why he would rather lug a giant cross down the road than accept a ride.

These moments build as the story unfolds, bringing empathy along with them. And while the film confronts the racism the Yi’s encounter in their new community, the story doesn’t look there for conflict. That comes from within the family and their struggles, not from external circumstances.

“Minari” is a true family drama, with a hint of “The Grapes of Wrath” thrown in for good measure. 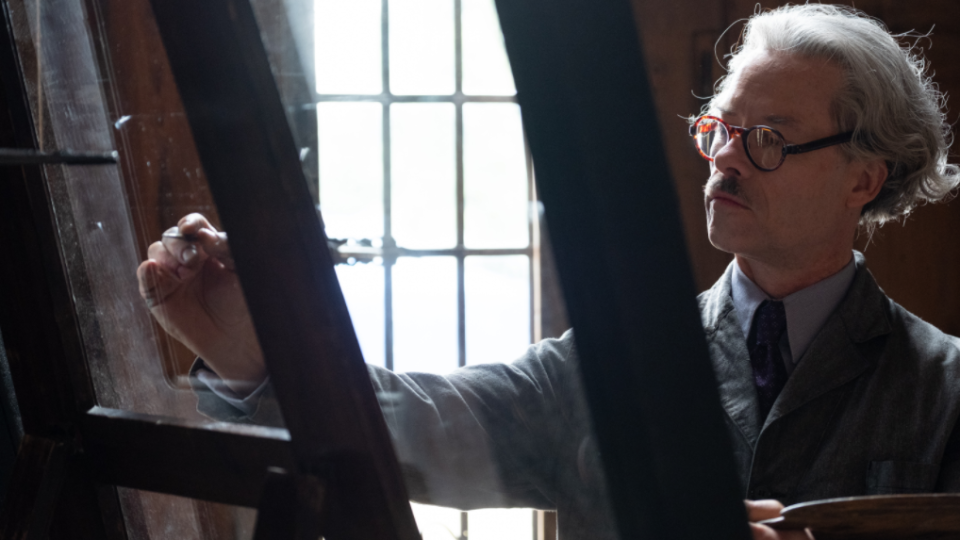 A mix of fact and fiction, the real and the unreal, “The Last Vermeer” starring Guy Pearce and Claes Bang, now on VOD, is a cat-and-mouse game with a high-minded purpose.

Set just after World War II, the story involves Captain Joseph Piller (Claes Bang), a Jewish member of the Dutch Resistance who spent the war years working underground. Now, he works with the Allied reconstruction corps, following the money trail from big ticket art sales that may have funded espionage.

His investigation introduces him to artist Han van Meegeren (Guy Pearce), a painter and art dealer who admits making millions of dollars selling art to the Nazis. Of particular interest is “Christ and the Adulteress,” a Johannes Vermeer masterpiece he sold to Hermann Göring for 1.6 million guilder. “Which proves that pigs have good taste or too much money,” van Meegeren sxays.

The Netherland’s government see him as a war criminal. “He’s an honorary Nazi,” says one bureaucrats. “Let him swing with the rest of them.” But there’s a twist; van Meegeren claims the paintings were fakes, forgeries he painted to defraud the Nazis. “I believe every Fascist deserves to be swindled,” van Meegeren says. An ensuing court case puts not only van Meegeren on trial for collaborating with the enemy during war, but also the very idea of what makes good art great.

“The Last Vermeer” is a handsome, deliberately paced historical drama given life by a flamboyant performance from Pearce. He’s a bon vivant, quick with a line and a theatrical character who given to histrionic outbursts. “I am an artist,” says van Meegeren, “not a Nazi spy.” Pearce is clearly having fun—more so than anyone else in the film—but he’s reigned in just enough to prevent van Meegeren from becoming a caricature. It’s the spark that keeps our interest in an otherwise nicely made but occasionally lethargic movie.

Most interesting are the questions van Meegeren’s forgeries ask. If they are good enough to fool the experts and please the eye, why can’t they be considered on their own merits? Was the painter, who is based on a real  artist who is considered the greatest forger of all time, touched by genius or simply an opportunist who wasted his talents to bilk the Nazis? The film stops shy of providing answers but provides food for thought. 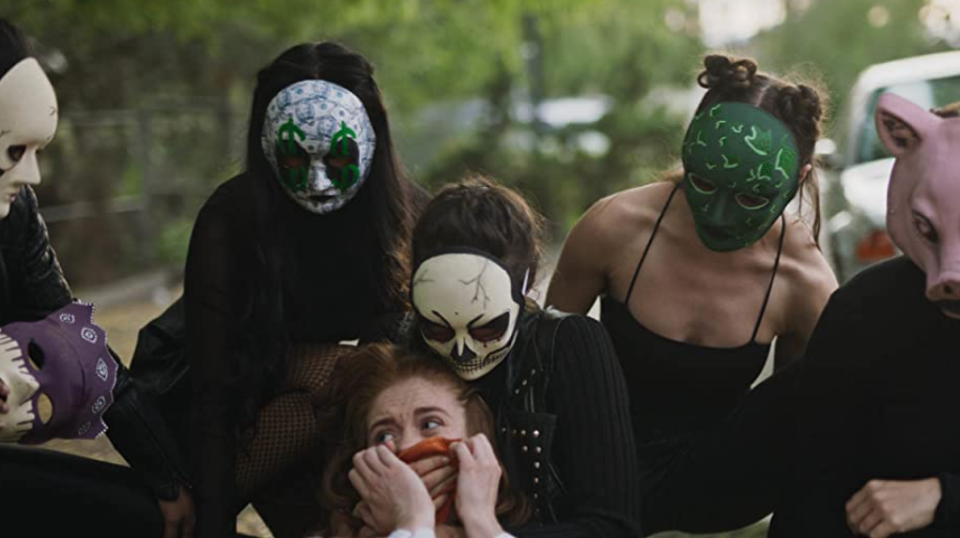 “This story isn’t about truth, or love,” says Aubrey Miller (Brenna Llewellyn) in “The Sinners,” now streaming on VOD, “this story is about sin.” Actually, it’s a story that feels like a time machine mash up of movies like “Cruel Intentions,” “The Craft” and “Mean Girls.”

Set in a small evangelical town, “The Sinners” is the story of a group of girls who rebel by forming a clique to personify the seven deadly sins, pride, greed, lust, envy, gluttony, wrath, and sloth. At the head is local pastor’s daughter Grace Carver (Kaitlyn Bernard) who represents lust. When she gets wind that Aubrey, who embodies pride, told Pastor Carver about the girl gang’s name The Sins and then, as if that wasn’t bad enough, had the temerity to write about their transgressions in her diary, she flips. “We have been betrayed,” she tells the other Sinners. “We have a rat amongst us and action must be taken.”

Before Aubrey arrives at a group meeting for what she thinks is a bible study class, Grace (who by this point is wearing Halloween devil horns) tells the gang, “We’re going to get wild tonight and push her beyond her breaking point. It’s time we take our sins to the next level.”

When the gang decides to throw a scare into her by staging a kidnapping, things go wrong and Aubrey vanishes into the woods. As the investigation into her disappearance amps up strange things happen, revealing the small town’s dark underbelly. Are the Sinners really sinners, or are they victims?

It’s an easy enough plot to follow, but if you do get lost director Courtney Paige “helpfully” provides a roadmap in the form of narration I suppose is supposed to lend a “Memento” vibe but simply tells us things we mostly already know. Add to that the repetitive procedural nature of the story and you’re left with a film that could have explored the hot button push and pull between faith and more terrestrial concerns, but instead chooses atmosphere over fear.

Points to Holly Amber Church who provides a suitably moody score, but beyond that “The Sinners” commits the cardinal cinematic sin of not grabbing the audience’s attention. 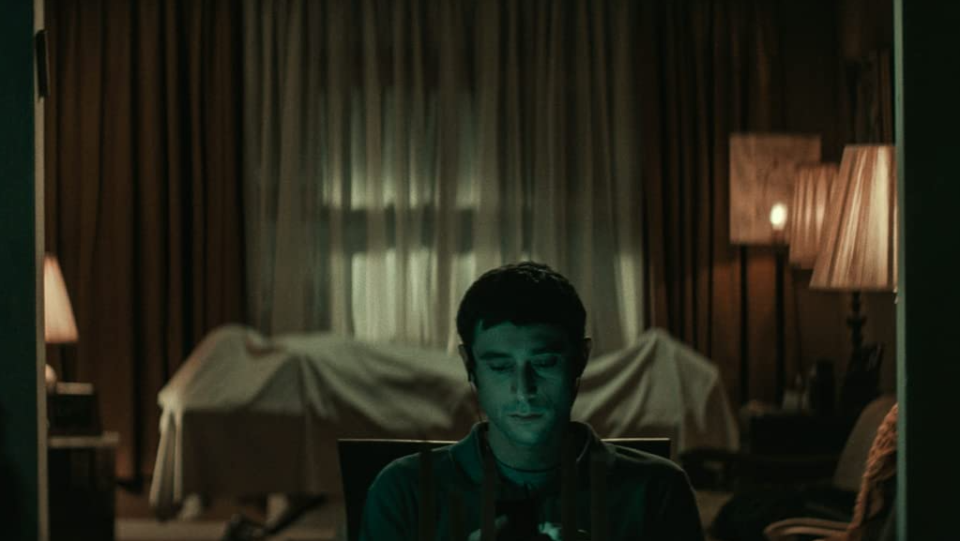 “The Vigil,” the first film from novelist-turned-director Keith Thomas and now available on VOD, is low fi movie with high fi horror.

When we first meet Yakov (Dave Davis) he is at a support group for Orthodox Jews adapting to life outside of Brooklyn, New York’s Hasidic community. Still adjusting to his new life, he’s unemployed, struggling to make ends meet. When his friend Reb Shulem (Menashe Lustig) approaches him with the offer of a job, he has no choice but to accept. For one night he will act as a Shomer, a guardian in the Jewish tradition, and watch over the dead body of Holocaust survivor Mr. Litvak (Ronald Cohen) until the time of burial.

Arriving at the house for the overnight stay, he’s greeted by Mrs. Litvak (Lynn Cohen) who warns him to leave. After Reb explains that she is suffering from Alzheimer’s, Yakov begins his solemn duty, watching over the shrouded Mr. Litvak.

Soon, as lights begin to flicker Yakov thinks he sees something scurry across the floor. But the true terror awaits as he uncovers a video detailing the ancient demon, the Mazzik, that attached itself to Mr. Litvak when he left Buchenwald.

“The Vigil” is a horror film that trades in the supernatural as much as the psychological. The shocks are born from director Thomas’s effective use of jump scares and things that go bump in the night, but the real terror here is intangible.

It is the reliving of memories, as Mr. Litvak says in the video, “the looking backwards” at the anti-Semitic horrors that shaped all their lives. We learn of the fate of Mrs. Livak’s father in the Kyiv pogroms of 1919, Mr. Livak’s treatment at the hands of the Nazi’s and the recent violence that prompted Yakov to leave his faith. They are, as Mrs. Litvak says, “broken by memories,” the inescapable weight that they carry.

“The Vigil” brings the horror out of the corners of the mind, and just possibly offers an avenue for Yakov’s catharsis and return to his faith, but not before presenting a deeply unsettling story