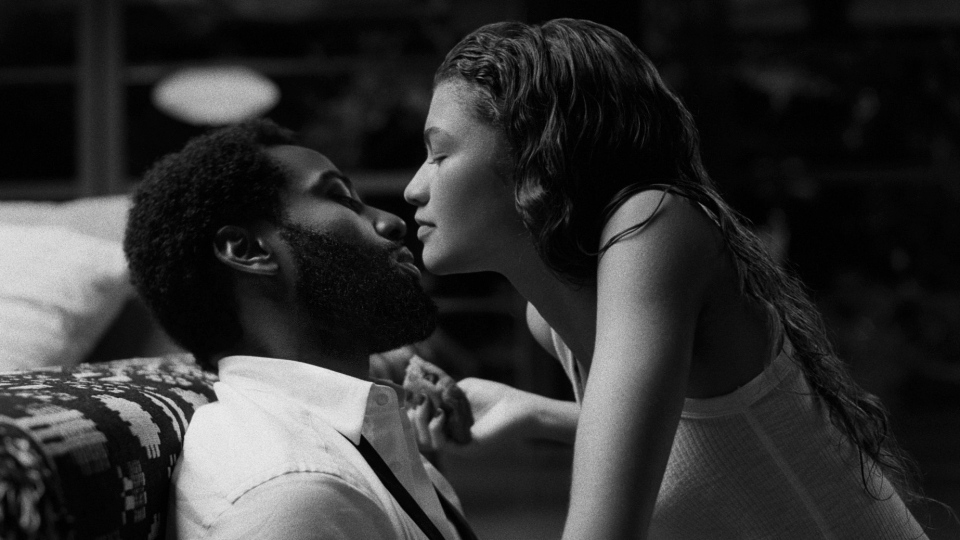 “Malcolm & Marie,” a two-hander starring Zendaya and John David Washington, now streaming on Netflix, is a pandemic movie. It was shot during lockdown, in one location under strict health protocols, but there’ is no mention of a virus or face masks. Instead, it crackles with anxiety, a feeling many are now all too familiar with.

Washington and Zendaya are the titular couple; an up-and-coming movie director and aspiring actress. Their romantic relationship is strained when he forgets to thank her from the stage during his new film’s premier. She’s not in the movie, but believes much of the story was borrowed from the more troubled moments of her life. It’s 1 a.m., tensions are running high as the gloves come off in an escalating power struggle.

Shot in luscious, grainy black-and-white, the study of a creator and his muse is first and foremost a showcase for the talent of its stars. Both actors drip charisma and deliver pages of complicated, emotionally draining dialogue with conviction and ease.

Malcolm is all bluster, a character prone to long diatribes about the politicization of art made by Black directors, the inability of film critics to judge his work fairly and, most importantly, why Marie is upset. He is blinded by ego and insecurity, and Washington digs deep to summon his inner demons. His near constant stream of film references -- Ed Wood, Ida Lupino, William Wyler, Elaine May and Barry Jenkins to mention a few -- may leave non-cinephiles looking to connect the dots.

Marie is just as fiery, but more self-aware. Her frustration bubbles throughout, but Zendaya brings layers to her. In the film’s first half, she is glammed-up, wearing a sparkling red carpet-ready dress. Midway through, she changes into lounge wear and with the change of clothes comes subtle changes to the character. She becomes more real, less guarded. It is a lovely, challenging performance from the recent Emmy winner. 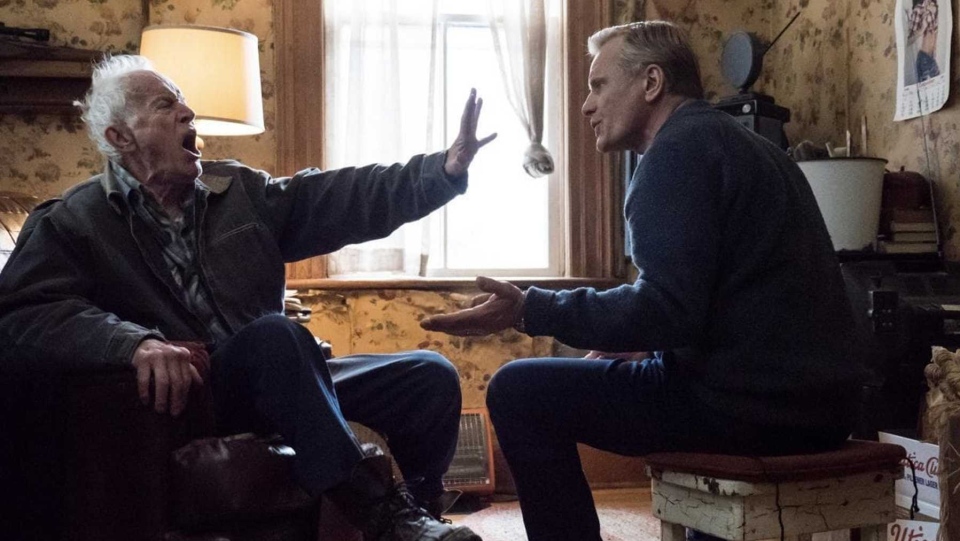 Darth Vader may be the cosmically worst cinematic father in the universe, but down on Earth, Willis, as played by Lance Henriksen in the new film “Falling” -- now available in select theatres, rent or buy on Apple TV and other VOD platforms -- gives the “Star Wars” villain a run for his money.

Writer, director and star Viggo Mortensen found inspiration for the story after caring for his real-life father in his declining years. Mortensen plays John, husband of Eric (Terry Chen), son of Willis. He is ex-Air Force, now working as a commercial pilot based in Los Angeles. It’s a long way from the rural New York farm where he was raised and his father still resides.

Willis isn’t doing well. Dementia has robbed him of the ability to live alone in the rambling old farmhouse he’s inhabited for decades. Hoping to make his father’s life easier, John brings him to California with an eye toward making it easier to care for him.

Trouble is, Willis’ disease has made him the definition of cantankerous. Anger, misogyny, and homophobia are a way of life for the old man who never misses an opportunity to spew his hatred. John bears the brunt of it, but Willis is an equal opportunity offender whose current bad attitude is a magnification of the behaviour that tore his family apart decades before.

“Falling” gives genre legend Henriksen his meatiest role in years. He is the dominant and dominating character; a man who makes Archie Bunker look like Prime Minister Justin Trudeau. It’s a raw performance, but after the first hour it becomes something close to parody as Willis’ insults become more and more vicious and increasingly inane.

Mortensen’s take on Jack is more nuanced. As the younger man searches for closure, Willis continuously tests the limits of his compassion and challenges the old man’s view of masculinity. Where Henriksen is playing to the back of the house, Mortensen is subdued, finding the character’s kindness in a very difficult situation.

We learn more about Willis in the flashbacks that make up about fifty per cent of the movie’s running time. As a young misanthropist-in-the-making, Willis is played by Sverrir Gudnason with a sneer and a quick tongue. The flashbacks are an origin story, a study in where Willis came from and a glimpse of the man he once was -- for better and for worse -- as he began driving everyone around him away. In these scenes, he still has a remnant of his humanity, and therefore, is a more interesting character than his elderly counterpart.

“Falling” is a self-assured and sometimes poetic directorial debut for Mortensen, marred by a repetitive central character you don’t want to be around for the film’s 112-minute running time. 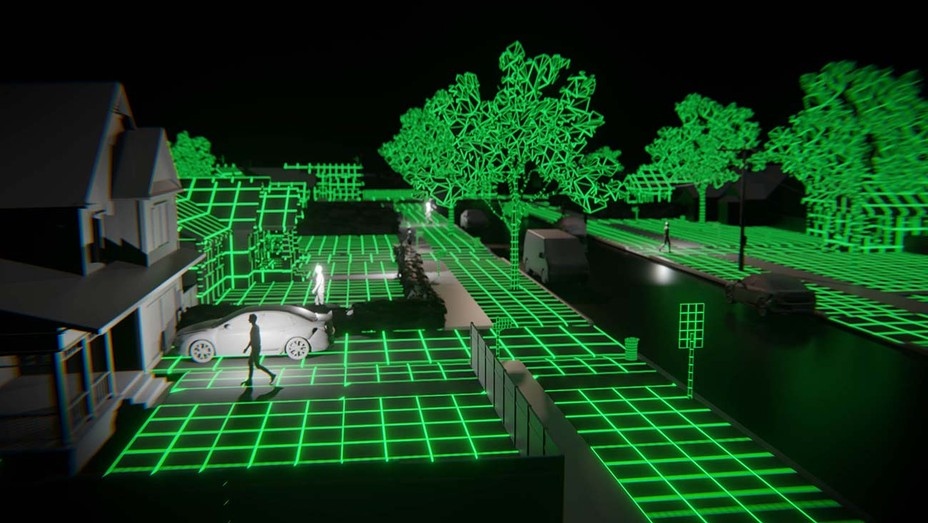 “A Glitch in the Matrix,” a new documentary now available to rent or buy on Apple TV and other VOD platforms, is a mind-boggling collision of religion, philosophy, conspiracy theory, and science fiction. Taking its lead from a 1977 speech by “Total Recall” author Philip K. Dick, the documentary is a study in reality; what’s real and, more importantly, what’s not. Is life what we experience or is it all an elaborate computer simulation? “People claim to remember past lives,” Dick said in the speech. “I claim to remember a very different present life.”

The simulation theory at the heart of the film is an unprovable hypothesis that boils down to the idea that everything, the Earth and its occupants, might be a computer simulation. It’s not a new idea. In the seventeenth century philosopher Rene Descartes said, “It is possible that I am dreaming right now and that all of my perceptions are false.”

How do people know they’re in a simulation? That’s the glitch, like in the Keanu Reeves film “The Matrix” where an anomaly, something that has no logical explanation, happens. In the documentary, someone tells a story of setting simple goals, like seeing an orange fish in the next ten minutes. Sure enough, on a street he’s never been down before he spies a giant orange neon fish sign.

Science fiction writers like Dick have played with the idea for decades, but director Rodney Ascher takes the idea out of the realm of sci-fi. He interviews a series of people, often disguised by digital avatars, to discuss whether simulation theory has merit or if it is a coping mechanism for an easier way to deal with the complexity of human existence.

Ascher explores the real-world consequences of this otherworldly theory with a long, chilling passage narrated by Josh Cooke, a 19-year-old dressed in a long, black trench coat, like Reeves’s character Neo, and believea he lived inside the Matrix. With a gun modelled on the one used in the film, he shot his father and mother before calling the police. It’s an effective sequence that brings the story to life, over Cooke’s monotone re-telling, with Matrix-inspired graphics. Cooke’s story also cuts through the documentary’s occasionally pedantic tone.

There are, of course, no answers in “A Glitch in the Matrix,” just lots of thought-provoking questions.

Whether we live in a counterfeit world or not, the ideas presented here reflect existential quandaries people have mulled over for centuries, but here they have a 21st century twist. Like all other speculation regarding our existence, no one is going have any answers until they’ are dead. What happens then? According to one of the documentary’s avatars, “It’s possible that after you die, you wake up in an arcade in the year 3000, put another quarter in and do another life on Earth in the year 2019.” It’s a new wrinkle on an old question that even Neo can’t answer. 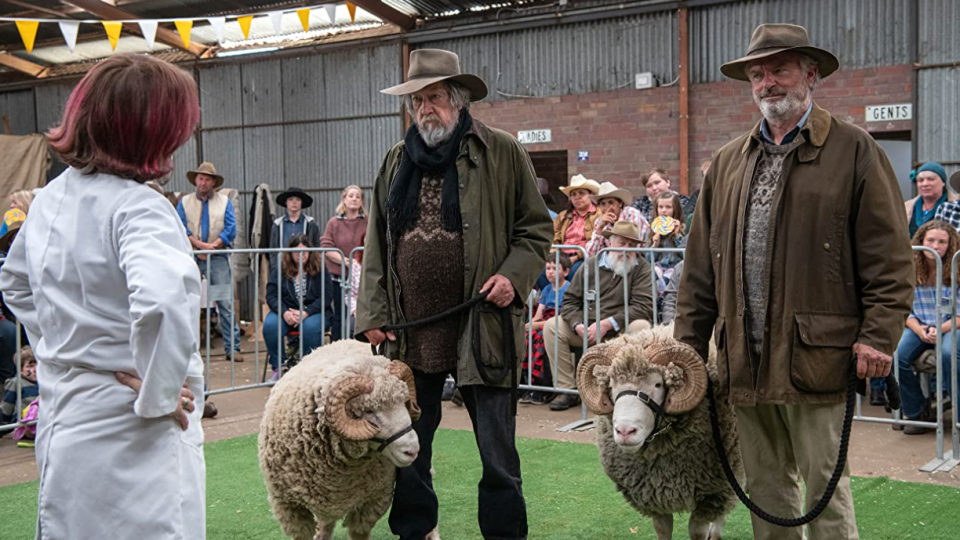 “Rams,” the new ovine comedy starring Sam Neill and Michael Caton and now available on VOD, isn’t just a wild ‘n woolly sheep’s tale. The Western Australia-set tale, a remake of an Icelandic film of the same name, is a study in changing time, loneliness and masculinity.

Stubborn, estranged brothers Colin (Neill) and Les (Caton) haven’t spoken in more than twenty years. Their farms butt up against one another, their sheep from the family bloodline, but, despite everything that bonds them, the siblings are virtual strangers.

Their lives intersect when one of Les’s rams is diagnosed with a deadly and highly communicable disease. Erring on the side of caution, authorities order a purge. All the sheep in the area must be put down. That would end the spread of the disease, but it would also end the prized family bloodline and their way of life. Les gives up hope, but Colin hangs on to a few of his sheep, who he calls “my girls,” hiding them in his house.

Will blood, or in this case, the bloodline, be thicker than water?

“Rams” feels like it might be a riff on a down-under riff on a British feel-good flick, but there’s more to it than that. Although gently paced, the humor is acerbic and the action unpredictable.

It is buoyed by strong-silent-type performances from Neill and Caton that ground the story in its time and place, bringing a sense of connection to the men who inhabit the story. The story is specific in its setting, but universal in its look at family, masculinity and legacy.

“Rams” is a feel-good movie, but it is a thoughtful one that doesn’t stoop to cheap theatrics to get its message across. 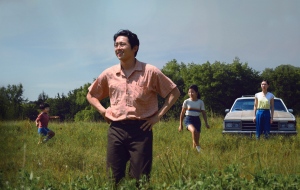