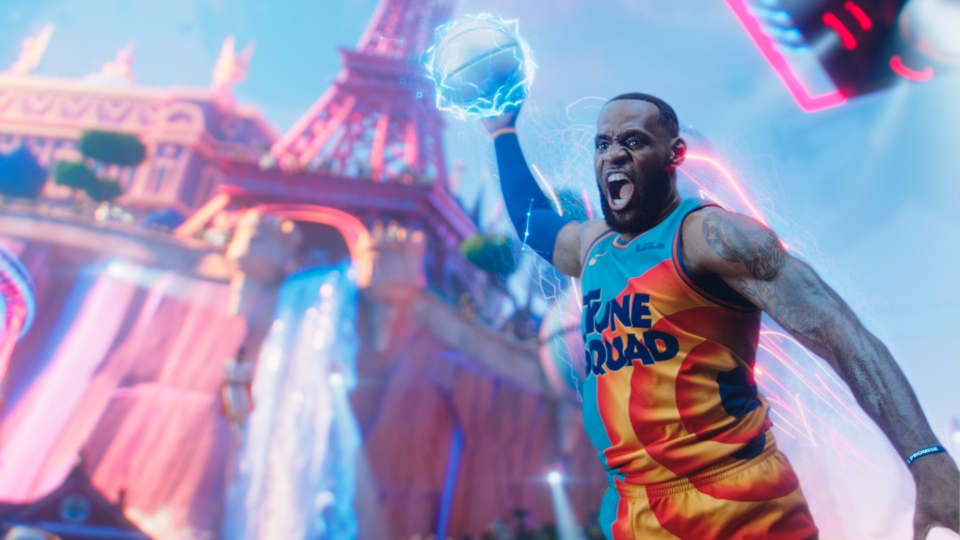 “Space Jam: A New Legacy,” now in theatres, freshens up the 1996 Michael Jordan live-action/animated sports hybrid film with a new star and a lot of familiar (animated) faces.

The story begins in Akron, Ohio, 1988. Teenaged LeBron James is a gifted basketball player, but is distracted by his Game Pocket Computer and cartoons. A reprimand from his coach—“You’re a once-in-a-lifetime-talent!”—convinces him to focus on basketball and forget about childish things.

It’s a lesson he takes to heart.

By the time he’s grown, and a superstar, he’s all business and doesn’t understand why his son Dom (Cedric Joe) is more interested in coding than crossover dribbles. The younger James is busy too, creating a basketball video game to become a team player.

Meanwhile inside the Warner Bros Serververse, Al-G Rhythm, a computer program stuck inside the Serververse, and who looks just like Don Cheadle, has his eye set on LeBron as his way out into the world. “Once I combine King James with my incredible tech,” she says, “I will finally get the recognition I deserve.”

Trouble is, LeBron is not impressed by the studio’s offer to scan him into movies, making him a virtual movie star. “Say yes,” the studio reps say, “and we’ll make mind blowing entertainment forever.”

But it’s a no. “It’s among the worst ideas ever,” says LeBron. “Athletes acting. That never goes well.”

Dom likes the idea, and his curiosity about the process leads him to the Warner Bros tech department, where he and LeBron get sucked into the movie studio’s server and come face-to-face with “nefarious nimrod” Al-G Rhythm.

Trapped in the digital space, the only way out is a high-stakes basketball game. LeBron must recruit the Looney Tunes gang to play against AI's over-the-top Goon Squad, made up of virtual avatars with super powers and names like Wet-Fire, White Mamba and Chronos.

From the Nike logo LeBron leaves pressed into the ground when he falls into the Looney Tunes-verse, to the “Mad Max,” “Casablanca,” “Austin Powers” and “Matrix” takeoffs, to the endless mentions of Warner Bros in the script, it’s hard not to feel like intellectual property and product placement are driving the story. It’s a wild and wooly world, imaginative and unpredictable, but it often feels like marketing rather than a story.

Not that kids will care. And that is who this movie is for.

Director Malcolm D. Lee keeps younger minds entertained with video game and cartoon inspired action, while adults will get the clever Michael Jordan joke and bask in the nostalgia of sees old characters like Bugs Bunny and Marvin the Martian in new situations. There’s also a pretty fun game in spotting the mix-and-march of characters who make up the audience for the big game. I spotted the Gremlins, the flying monkeys from “Wizard of Oz,” Pennywise the Clown and a dozen or so others.

“Space Jam: A New Legacy” smooths away some of the adult edges from the first movie—there are no Quentin Tarantino references this time around and Lola Bunny, now voiced by Zendaya, no longer wears a crop top—resulting in a family-friendly film with good messages about being your authentic self and not what others want you to be, and the importance of playing by the rules. 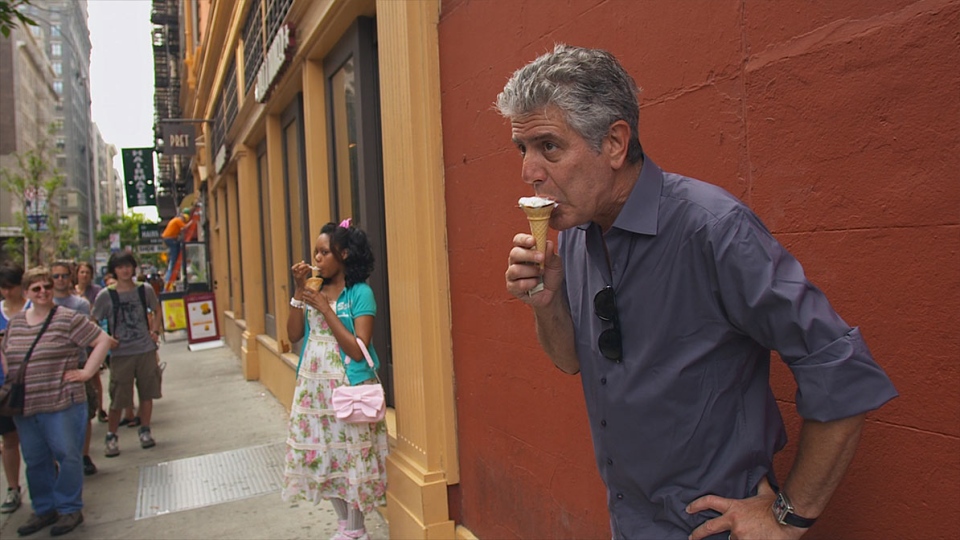 In the opening moments of “Roadrunner: A Film About Anthony Bourdain,” a new documentary about the late television host and author, now playing in theatres, we hear the titular character’s voice state the obvious. “This does not have a happy ending,” he says.

The edgy but empathic Bourdain, who was 61 when he took his own life while shooting a television show in France, inspires strong feelings. A standard, hagiographic look at his life, rehashing the well-known details of his career, would be met with a collective yawn. Get too prickly and it might be seen as disrespectful to the memory of a man many still miss.

“Roadrunner” somehow straddles the line, providing a balanced overview of the scrappy chef’s personal and professional lives. Using outtakes from Bourdain’s shows “No Reservations,” “The Layover” and “Parts Unknown,” new interviews with friends and family and home footage, director Morgan “20 Feet from Stardom” Neville compiles a Russian nesting doll look of his subject.

What emerges is a deep dive into the life a complex man; a person who circled the globe dozens of times searching for meaning with every air mile point earned. “His whole personality was of a searcher,” says Alison Mosshart, the vocalist of The Kills and The Dead Weather. “He was always looking for something, and it was agony for him.”

Neville captures some of that agony, forcing the viewer to see familiar footage recontextualized by Bourdain’s co-workers and friends. With no shortage of material to choose from—Bourdain’s 250 days a year on the road were meticulously filmed and documented—Neville cherry picks moments that reveal the toll Bourdain’s schedule, celebrity and search for normalcy took.

Often the most revealing footage isn’t of the man speaking, but of the exhausted or melancholy look visible in his eyes as he performs for the camera. “Life was never going to measure up to how he pictured it,” says “Parts Unknown” segment producer Helen M. Cho. “He set himself up for disappointment.”

The circumstances of his death, of course, are investigated. His colleagues become tearful describing his last months as a lifelong addict who turned his addition to Italian actress and director Asia Argento. “Roadrunner” examines Bourdain’s final days but this isn’t a whodunnit or an exercise in pointing fingers. It’s a story about his life, not death.

“Roadrunner: A Film About Anthony Bourdain” provides an emotionally raw portrait of a gifted, charismatic man who travelled the world but never quite figured out where he needed to be. “You are not going to outrun or out smart pain,” comments artist David Choe, who provides the movie with a suitably Bourdain-esque ending. 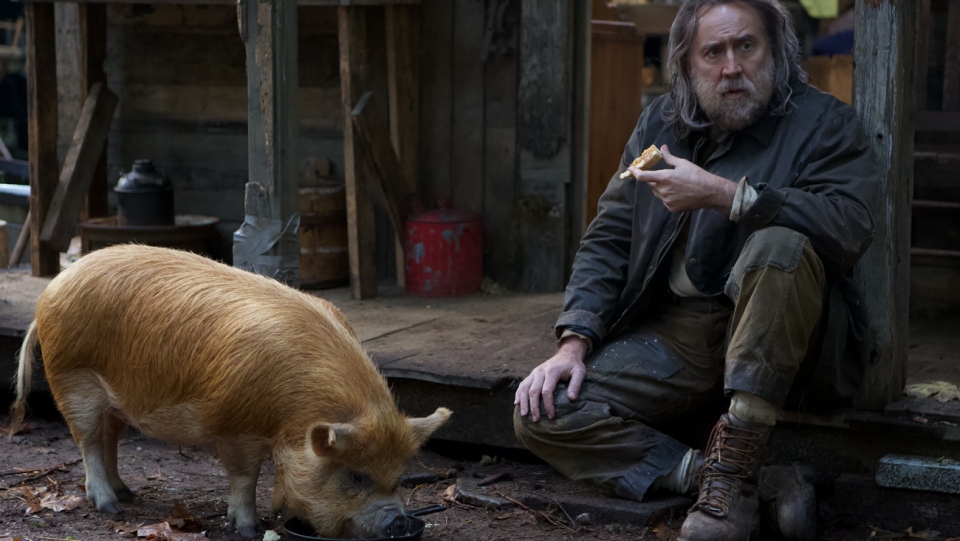 Trailers for “Pig,” the new Nicolas Cage movie now playing in theatres, suggests a bacon flavored version of “Taken,” but that’s not what the movie is about. There is a kidnapping, a chase and even a catchphrase—“I need my pig.”—but this is an dissertation on bereavement, so don’t expect a hog-wild action movie.

Cage plays Robin Feld, a once revered chef in the Portland, Oregon area, who gave it all up to live in the middle of nowhere with his truffle-hunting pig. His only contact with the outside world is Amir (Alex Wolff), the young man who supplies restaurants with the truffles Robin and his beloved pig find in the woods.

After a day of foraging, Robin and the pig settle in for the night, when suddenly the door is kicked in. Robin is knocked unconscious and the pig is abducted. The next day, with dried blood still caked on his face, Robin recruits Amir to chauffeur him around Portland in search of the people responsible for the pignapping.

“Pig” is advertised as a thriller, but it’s not. It’s more a story loss and what happens to people when the thing they care about is taken away. A key phrase comes in a long scene between Feld and a local chef as they discuss passion as it relates to food, life and relationships.

“We don’t get a lot of things to really care about,” Feld says. It’s a speech about the deep connection we make to the people and things we feel passionate about, and how important it is to heed those passions.

It’s also a testament to the void those passions leave when bad things happen. No spoilers here, but “Pig” isn’t about the kidnapping or the chase, it’s about passion, and the deep well of emotion that accompanies it.

Once again Cage takes on a taciturn character with a past. For the first half of the movie the pig has more lines than Cage. As such, the gonzo actor keeps the yelling and the histrionics to a minimum. For much of the movie, despite his ragged appearance, he is restrained almost to the point of sleepwalking. It doesn’t make for compelling viewing, but as the character opens up verbally, we begin to understand his motives for past and present behavior and the character comes into focus.

“Pig” is a nicely performed movie that delivers beyond its absurd sounding premise—man searches for his kidnapped pig—but may play too minor a chord to really strike home emotionally.

Movie reviews: Trauma lies at the heart of the storytelling in 'The Card Counter'

Movie reviews: 'Shang-Chi and the Legend of the Ten Rings' has heroics, heart, and humour

Movie reviews: 'The Protege' aspires to be something bigger than it is