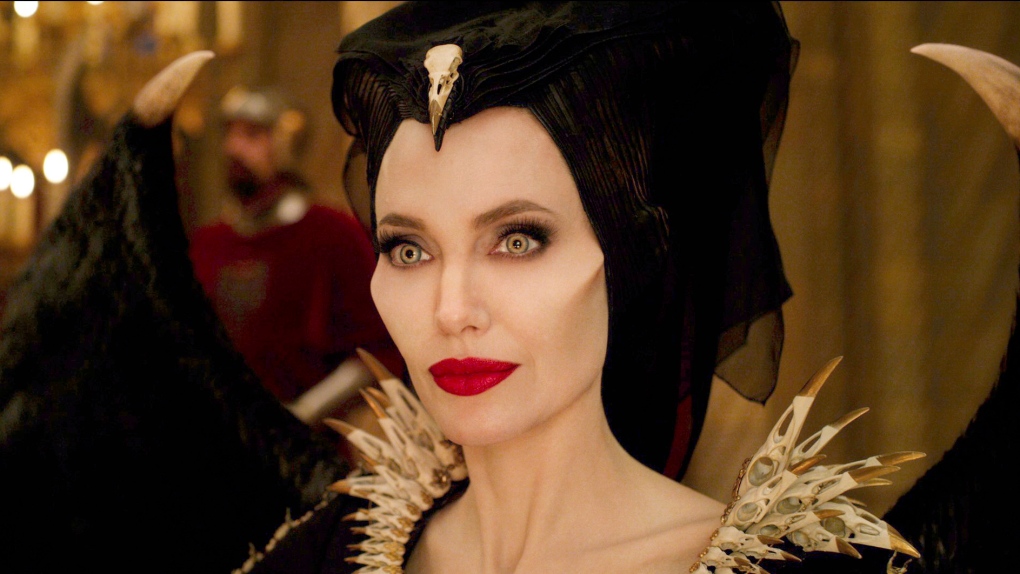 This image released by Disney shows Angelina Jolie as Maleficent in a scene from "Maleficent: Mistress of Evil." (Disney via AP)

For a moment, "Maleficent: Mistress of Evil" seems poised to turn into a wonderful take on "Father of the Bride" only with fangs and wings.

Princess Aurora (Elle Fanning), the beauty who escaped the curse of sleep, merrily accepts the proposal of Prince Phillip (Harris Dickinson), a marriage that could unite the fairy and human worlds. Aurora cautiously asks if Maleficent (Angelina Jolie), her now-redeemed fairy godmother, might go with her to meet the parents: Queen Ingrith (Michelle Pfeiffer) and King John (Robert Lindsay). It's so much fun watching Maleficent prepare for the meeting by practicing such basic cordialities as smiling and small talk that it's hard not to wish the movie sees the fearsome sorceress through the entire battery of wedding planning. Maleficent at a bridal shower. Maleficent choosing the table settings.

Sadly, such fun is not to be had in "Mistress of Evil," a needless sequel to the 2014 "Sleeping Beauty" riff that fails to fully value the entire of appeal of these films: Jolie's Maleficent. The first movie, a box-office hit, was a mess but its star attraction was the one thing it had going for it. Jolie, an unfortunately infrequent presence on the screen these days, slid into the role so perfectly, dominating all around her with Norma Desmond command and cheekbones that could slice your throat.

The character had its roots in those '50s melodrama stars; Marc Davis, animator of the 1959 Disney film, also sculpted Cruella de Vil. And in teaming Jolie with the equally potent Pfeiffer, whose queen quickly turns into Maleficent's bitter foe, "Mistress of Evil" had the potential of summoning the intoxicating stuff of Joan Crawford and Bette Davis.

But the movie, with Joachim Ronning ("Pirates of the Caribbean: Dead Men Tell No Tales") taking over for Robert Stromberg, overcomplicates itself. Instead of aiming for the elemental simplicity of a fairy tale, "Mistress of Evil" fills itself with the politics and detail of the fairy-human struggle, building inevitably to a PG-friendly war between Queen Ingrith's army and the magical spirits of the Moors, spread out across impressively vast computer-generated palace grounds.

It's starting to seem like every franchise film, when in search of a story, throws a battle against the wall and hopes something sticks. Not only has this gotten tiresome, but it also sacrifices what we came here for in the first place: Jolie and Pfeiffer glowering at each other. But all the necessary buildup to the clash (including Chiwetel Ejiofor as among an exiled group of winged creatures called the dark fey) robs us of enough screen time with Jolie's Maleficent.

The plot in "Maleficent" drew largely from its inventive redemption of a classic Disney villain. But it didn't really follow through on the possibilities of fairy tale revisionism. It simply offered up another villain (Aurora's father King Stefan), just as "Mistress of Evil" does with its dastardly Queen Ingrith. A better film would have kept playing with inverted archetypes.

What saves "Mistress of Evil" from a worse fate, in the end, is Fanning. Aurora, like many of Fanning's performances, is a welcome dash of naturalism amid all the CGI action. She's such an innocent and wholesome young bride, though, that perhaps she's ripe for reconsideration, too. Next time, maybe Beauty breaks bad.

MPAA Definition of PG: Parental guidance suggested. Some material may not be suitable for children.