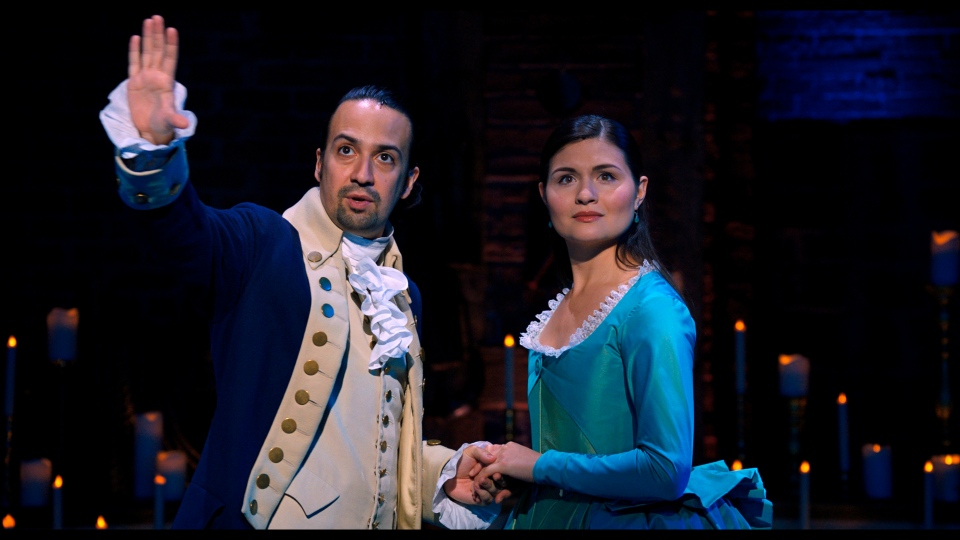 In the now-shuttered world of musical theatre, the name “Hamilton” is said in hushed reverential tones. The groundbreaking show, which mixes-and-matches hip hop, R&B, pop, soul and traditional show tunes to tell the story of American Founding Father Alexander Hamilton, was called “the phenomenon of the season, perhaps of a generation,” by Forbes.

Its appeal to a younger audience, who packed NYC’s Richard Rodgers Theater night after night, gave Broadway a desperately needed shot in the arm and at one point the show was responsible for more than 5% of the Broadway districts total gross.

A new, filmed version, headed by creator Lin-Manuel Miranda, offers up a chance for people who couldn’t afford to blow a mortgage payment on tickets to the original production to watch the show from the comfort of their Disney+ stream.

The movie, shot in June 2016 at the height of “Hamilton”-mania is anything but hushed or reverential. The show, which features a diverse cast including Black, LatinX and Asian actors to tell the story described as being about “America then, as told by America now,” is passionately political, raucously rebellious and emotionally deep.

“Just like my country, I’m young, scrappy and hungry,” Miranda sings in a phrase that could be about the musical as much as it is Hamilton’s personality.

A toe-tapping history lesson, the show details the American Dream life of Hamilton, from an outsider born to unwed parents on the Caribbean island of Nevis to war hero to George Washington's Revolutionary War aide, and, as first Secretary of Treasury under Washington's administration, the founder of America’s economic system. It’s a bootstrap story about legacy, reputation, honor and if that wasn’t enough, there’s an extra-marital affair and, of course, the fateful duel with Aaron Burr.

Director Thomas Kail, who also directed the show’s Off-Broadway and Broadway productions, keeps the camera work to a minimum, simply and effectively capturing the show from a front row center perspective. It’s handsome work that tries to preserve the integrity of the live presentation while still creating a kind of cinematic experience.

As far as the show goes, what the filmed “Hamilton” presents is a moment in time when the musical lived at the very center of pop culture. The original cast, including Miranda, Phillipa Soo, Leslie Odom Jr., Daveed Diggs and Jonathan Groff among many others, are working in peak form.

As a document of a special show the filmed version doesn’t add anything to the presentation, but perhaps that’s the point. Miranda’s daring, genre busting show speaks for itself, often with beautiful tongue-twisting wordplay, and doesn’t need flashy cinematic theatrics to bolster what is already a provocative and timely story of creating a union where none existed. 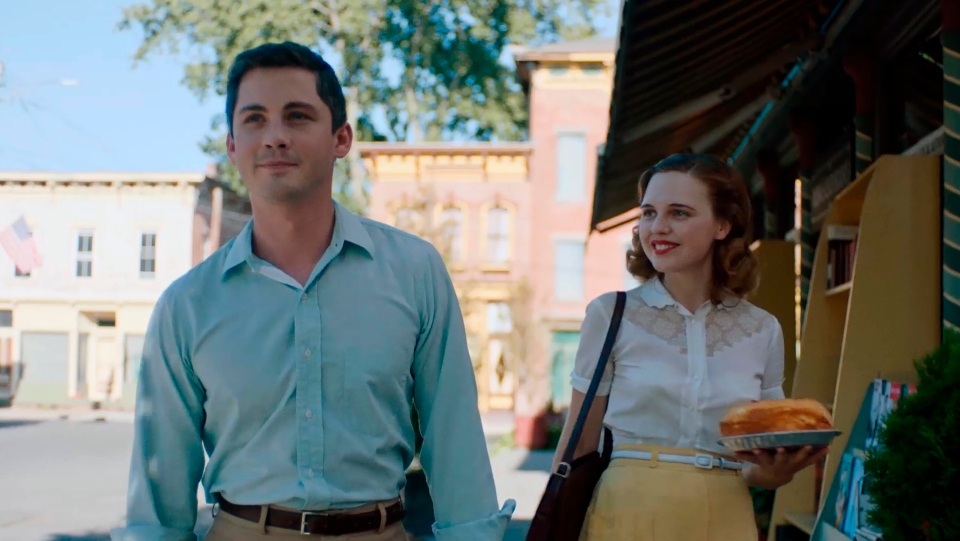 When reclusive author Shirley Jackson died in 1965 she left behind a body of work, including “The Haunting of Hill House,” a supernatural horror novel sometimes called one of the best ghost stories ever written.

An influence on two generations of speculative fiction writers like Neil Gaiman, Stephen King, Sarah Waters and Richard Matheson, she is brought to vivid life in a new fictionalized drama, now on VOD, starring Elisabeth Moss.

Set just after the publication of “The Lottery,” a controversial short story about the ritual sacrifice of a town citizen to ensure good crops, published in a 1948 issue of The New Yorker, the film sees Shirley (Moss) paralyzed by the expectations that hang heavy over “Hangsaman,” a novel she is struggling to complete. Prickly and quick with a line, she is less than pleased when Stanley (Michael Stuhlbarg), her college professor husband, arranges for his new assistant Fred Nemser (Logan Lerman) and his pregnant wife Rose (Odessa Young) to live in their house while the young couple searches for a place of their own.

As the days and weeks stretch into months the relationship between the two couples becomes a blend of art and reality, a claustrophobic rabbit hole where Rose becomes the model for Shirley’s new main character, a college student who went walking on Vermont's Long Trail hiking route and never returned.

“Shirley” uses elements of Jackson’s life but places them in context of one of her novels. The result is a psychological drama; a haunting look at a person driven to agoraphobia by the weight of her success and a domineering, philandering husband.

Moss is fascinating as the title character. Her take on Shirley is that of a woman who has lived under years of oppression by her bullying husband, a man whose misogyny has left her embittered, desperate and anxious.

“To our suffering,” Stanley says as a toast to his wife. “There’s not enough Scotch in the world for that,” Shirley snorts, in a line that could have been borrowed from “Who's Afraid of Virginia Woolf?” She’s vulnerable and filled with rage, compassionate and spiteful, often in the same scene.

Shirley and Stanley, as compelling as they are as characters, do not comprise the film’s defining relationship. Director Josephine Decker feeds on the psychological aspects of Jackson’s work to tease out a story of Shirley and Rose, two women drawn together by frustration, talent and obsession over the missing woman at the heart of the new novel.

"Let's pray for a boy,” Shirley says to the pregnant Rose, “The world is too cruel for girls.” Their time on screen together is complicated, occasionally unsettling as reality and imagination meld. It’s fascinating work in a film that is a slow burn.

“Shirley” takes its time to get where it is going, building an atmosphere of oppression slowly and carefully. Decker’s distorted dream-like visual approach is often beautiful, as though we’re watching the film through a psychological prism. It creates atmosphere but doesn’t provide the thrills that Jackson herself might have been able to infuse into the telling of this tale.

“American Woman,” the first feature directed by “Mad Men” producer and writer Semi Chellas, is a fictionalized version of real events. A series of title cards set the stage. The year is 1975. “After multiple investigations, the President of the United States has been forced to resign.” “America’s disastrous involvement in the war in Vietnam is finally coming to an end.” “Some radicals still believe a revolution is necessary.”

Amid this time of political turmoil is Jenny Shimada (Hong Chau), a bomb maker who once blew up a draft board office. On the run, she is hiding out in upstate New York, working as a house keeper for a rich, conservative woman (Ellen Burstyn). She comes out of her semi-retirement when a publisher and old colleague-in-the-cause contacts her with a new mission. He wants her to look after three fugitive Symbionese Liberation Army members, Juan (John Gallagher), his wife Yvonne (Lola Kirke), and Pauline (Sarah Gadon), the kidnapped daughter of a newspaper magnate, as they write a book about their experiences.

“You can’t just sit around waiting to die or be caught,” she tells them. “You have to start writing. Write the book, make the money. It’s the only way you’ll survive underground.” Jenny’s reward? Enough cash to leave the country.

The basics of the story are borrowed from the well documented kidnapping and radicalization, of American heiress Patty Hearst. Pauline is an obvious surrogate for Hearst while Jenny is a fictionalized version of Wendy Yoshimura, the woman who was with Patty Hearst when she was apprehended.

The names have been changed and some of the details, but this sharply written story isn’t a history lesson. It’s a study of people who have chosen a radical path in life. It showcases Jaun’s ideological rantings but also wonders aloud if Pauline truly converted to the cause or was simply trying to survive. “I don’t want to be an outlaw,” she says. “Outlaws always die at the end of the story.”

Add in themes on toxic masculinity—Juan may be a free thinker but his behavior toward women is anything but enlightened—sexuality, class, gender and race and you have film big on ideas while leaving the action scenes for other movies.

“American Woman” is a movie that values words. Some may find the storytelling a bit too low key for such an explosive subject, but the performances, particularly Chau, give the story layers. Chellas, who wrote the script in addition to directing, uses the main characters, Jenny and Pauline, as conduits to help us understand a complicated and slow-simmer story of survival. 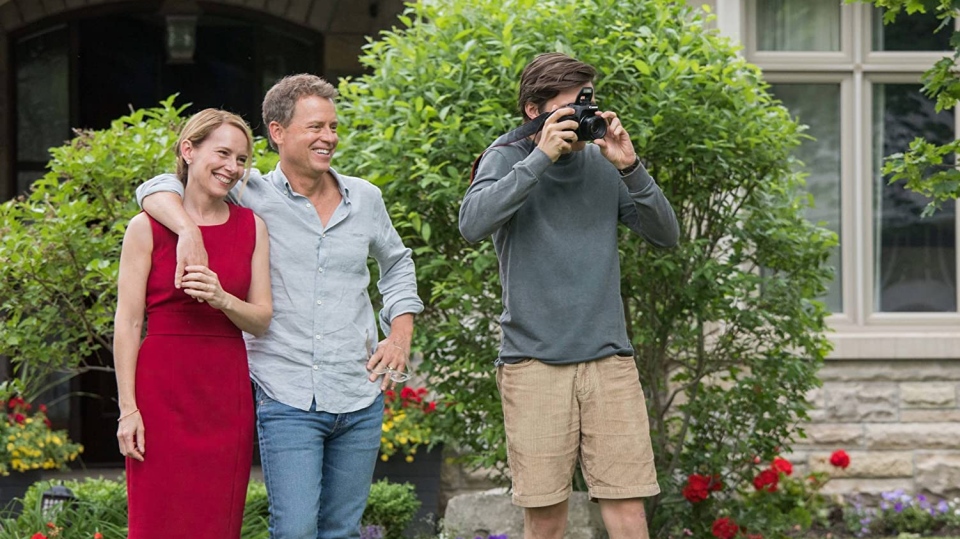 “Strange But True,” a neo-noir thriller on VOD starring Amy Ryan and Margaret Qualley, examines grief in the context of an ordinary family thrown into extraordinary situations.

The action takes place against the backdrop of loss. Five years ago Ronnie Chase (Connor Jessup) and Melissa’s (Margaret Qualley) prom night began as they all do, with a rented tux, a frilly dress and proud parents taking photos. It ended in tragedy, with Ronnie dead in a car crash, an event that sent shock waves through the family. Stricken, his folks Charlene (Amy Ryan) and Richard (Greg Kinnear), split under the weight of their grief. Younger brother Philip (Nick Robinson) hightails it to NYC to pursue his dream of being a photographer and girlfriend Melissa is wracked with guilt, left with only her dreams of her late boyfriend.

Cut to present day. Charlene’s life has fallen apart. Her husband and job are gone, so when Melissa shows up, five years after the fateful night, claiming she is pregnant with Ronnie’s baby, she is not met with hugs and congratulations.

“If you think about it,” says Phillip, home recuperating from a badly broken leg, “there’s a chance what she said is true. If, and it’s a big if, if Ronnie’s sperm was somehow frozen before he died there’s a chance Melissa could have used it and impregnated herself years later.”

“That’s ridiculous,” Charlene snarls. “He was a teenager with his whole life ahead of him. Why would he do that?”

She sets off to find a rational explanation while Phillip grasps at straws, consulting psychics and leaving no possibility off the table. “I might not believe that this is Ronnie’s baby,” he says to Melissa,” but I believe that you believe it and I believe that Ronnie would have too. If that makes me an uncle, so be it.”

That search is the bedrock for a story packed with secrets and intrigue. Adapted from John Searles’s 2004 novel, “Strange But True” is a bit of a nesting doll of mysteries. Everyone has a backstory and a different relationship with the intrigue that forms the plot and the action toggles between past and present. That means there’s a lot to wade through in the film’s tight ninety-minute running time but director Rowan Athale manages it. He weaves psychological drama, a hint of paranormal, suspense and even some gothic horror into the story.

In the end, the pregnancy is a McGuffin, simply a device to put all these elements into motion, but the result is a tightly wound thriller that leads to a gripping and satisfying conclusion.