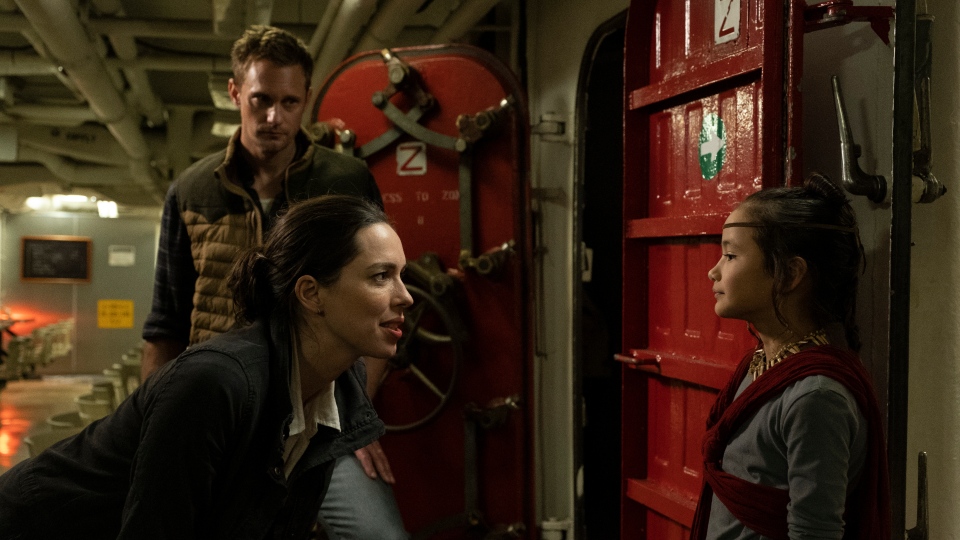 “There can’t be two alpha titans,” says Ilene Andrews (Rebecca Hall), and yet, here we are with “Godzilla vs. Kong,” a mighty monster showdown now in theatres and Premium Video on Demand.

The sequel to “Godzilla: King of the Monsters” and “Kong: Skull Island,” dispenses a whole lot of plot rather quickly to make room for the main event, a cage match between the two titans.

That’s not a spoiler; it’s an inevitability. But let’s not get ahead of ourselves.

Before the crash-bang-boom of the movie’s climax, the story begins with Nathan Lind (Alexander Skarsgard) pitching an idea to Walter Simmons (Demián Bichir), the big-thinking, but possibly evil Elon Musk-esque CEO of Apex Cybernetix. Lind is convinced that solutions for the planet’s energy problems lie in the unexplored Hollow Earth, a subterranean world deep within the Earth’s core. Long believed to be the natural home of King Kong, Lind proposes transporting the giant ape from Skull Island to act as a tour guide.

Meanwhile, there’s trouble in Pensacola, Florida. Godzilla has re-emerged with a grudge against Apex. As he lays waste to the company’s research facility, a CNN headline reports: “Godzilla is no longer a saviour.”

Inside the plant, nosy podcaster Bernie Hayes (Brian Tyree Henry) works feverishly to expose Apex and their plans for world domination. He’s aided by Madison Russell (Millie Bobby Brown) and Josh Valentine (Julian Dennison), teen do-gooders who are convinced there is something twitchy causing Godzilla’s recent erratic behaviour. “There’s something provoking him that we’re not seeing,” she says.

That’s a lot of plot and I haven’t even mentioned Jia (Kaylee Hottle), the youngster who teaches Kong sign language or the new creatures from Hollow Earth.

“Godzilla vs. Kong” may be jam packed with up-to-the-minute references about podcasts and genetic memory, and hot button notions about big, bad corporations and conspiracy theories, but make no mistake, at its giant heart, this is an old-fashioned creature feature.

Hall and Skarsgard et al. acquit themselves well enough to keep the action moving along, but this movie belongs to the big guys, Kong and Godzilla. The quaint days of actors in rubber suits playing movie Kaiju are gone, replaced by CGI beasts who battle on land, underwater, and under the Earth’s crust. There’s nothing particularly organic about them, unlike Willis O'Brien’s original stop-motion Kong or Haruo Nakajima’s lumbering Godzilla, but “Godzilla vs. Kong” manages to inject some personality into its leading men.

They are a classic, big screen match-up. A furry Redford and Newman. A monstrous Bonnie and Clyde. Kong is the Woody to Godzilla’s Buzz Lightyear. The giant ape is introspective, soulful while Godzilla is decisive, and quick to action. Together they are a fearsome yet kitschy Kaiju duo who deliver the battle scenes that provide the payoff after the first reel’s exposition and plot dump.

It is fun, and franchise fans will get a kick out of the action, but “Godzilla vs. Kong” doesn’t have the social subtext of other films in the series. There is talk of the end of the world, but metaphors on the devastating impacts of nuclear weapons or the exploitation of nature for personal gain are buried underneath the rubble left behind by the final showdown between the titans.

For a movie about two heavyweight creatures, “Godzilla vs. Kong,” with its big battles and “Guardians of the Galaxy” style soundtrack --"The Air That I Breathe” by The Hollies and the like decorate the score -- feels surprisingly lightweight. 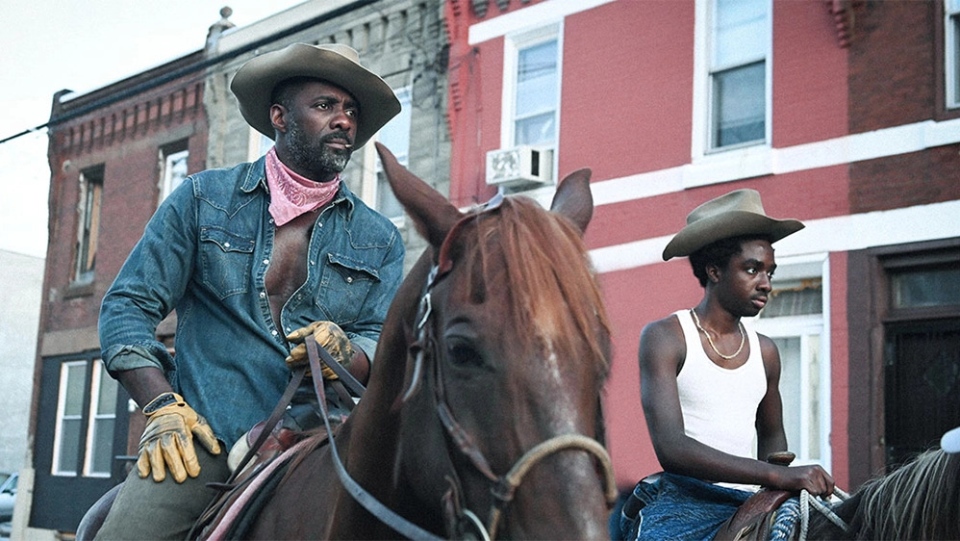 Despite the similarities in name, “Concrete Cowboy,” the new drama starring Idris Elba and Caleb McLaughlin of “Stranger Things” as father and son and now on Netflix, has nothing to do with “Urban Cowboy,” the 1980 John Travolta cheese fest. This is a deeply felt, if slightly predictable, coming- of-age story set against the backdrop of the urban cowboy subculture of north Philadelphia.

Fifteen-year-old Cole (McLaughlin) is a troubled kid. Constantly in trouble at his Detroit school, his mother has had enough. “You’re going to drown,” she tells him before sending him off to spend the summer in Philadelphia with his estranged father Harp (Elba), a tough, old-West style cowboy who lives and rides at a century-old African American horsemanship institution called the Fletcher Street Urban Riding Club.

Cole, who is forced to bunk in the stables upon arrival, is quickly put to work, cleaning up after the horses, learning the discipline that comes with hard work. It’s a learning curve for the young man, but as rider Esha (Ivannah Mercedes) says, “Horses ain’t the only thing that need breaking around here.”

Threatening the stability Cole finds at Fletcher Street is Smush (Jharrel Jerome), a low-level drug dealer who points the way to any easier method of making money.

Loosely based on book “Ghetto Cowboy” by Greg Neri, “Concrete Cowboy” is a western, but told from a different point of view than we usually see. Director Ricky Staub does a commendable job at building the world Harp and Cole inhabit. Their way of life is an anachronism in the big city, but the greater purpose of providing opportunities to the area’s youth is timeless.

It’s an interesting and vibrant subculture that forms the backdrop of the father-son relationship that feels like something we’ve seen before. Cole wants approval from his father, even though he’s not yet ready to forgive him for the absence that has left a gaping hole in his life. We’ve seen that dynamic before, but rarely on horseback.

Elba is the above-the-title star, but his lived-in depiction of Harp takes second place to McLaughlin. As a young man in need of saving, he brings vulnerability and innocence, but also the rebellious streak of someone who is still figuring out who he is. It’s nicely crafted work, ably supported by a cast of pros, like Cliff “Method Man” Smith as a local, sympathetic police officer, and Lorraine Toussaint and non-actors like Jamil Prattis, a wheelchair bound Fletcher Street stables fixture who brings authenticity and charisma to his role.

In the end, “Concrete Cowboy” isn’t simply a father-son reunion tale. It’s something more; an ode to a specific way of life with universal messages of the value of community. 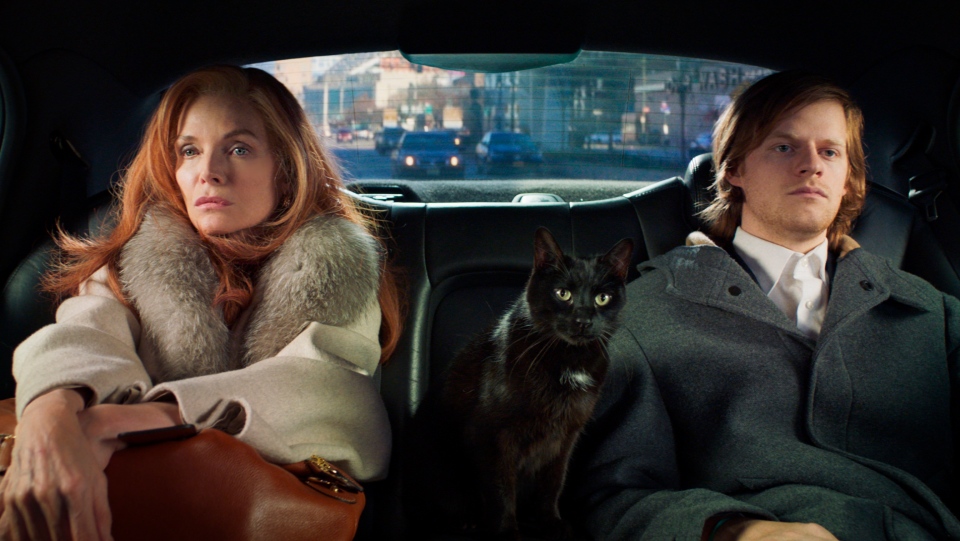 “French Exit,” now playing in theatres, takes place in New York City and Paris, but to be honest, I’m not sure what planet most of these characters live on.

Michelle Pfeiffer is Frances Price, a stylish, eccentric New Yorker whose inherited fortune has almost run dry. She’s famous in society circles for her once giant bank account and in the tabloids as the wealthy widow who discovered her husband Franklin (Tracy Letts) dead in his bed, but didn’t report it until after she returned from a planned weekend ski trip. She has lived her life with no apologies and always says what’s on her mind. “The plan was to die before the money ran out,” she says, “but I kept, and keep on, not dying and here I am.”

Her son Malcolm (Lucas Hedges) has drifted through life since his mother pulled him out of private school at age 12. They share a rambling mansion, but not everything is out in the open, like his engagement to the prim Susan (Imogen Poots).

With no means to stay in New York, mother, son and their mysterious cat Small Frank (voiced by Tracey Letts), sell off assets and decamp to Paris, staying in the apartment of Frances’ closest friend Joan (Susan Coyne). There, Frances continues her lavish ways, vastly over tipping waiters, going through whatever money is left, as if to fulfill her prophesy that she will go when the money is gone.

An air of ennui hangs heavy over “French Exit,” but it’s not a depressing film. The collection of quirky characters -- including lonely expat New Yorker Madame Reynaud (Valerie Mahaffey), private investigator Julius (Isaach de Bankole), and clairvoyant Madeleine (Danielle Macdonald) -- juice the inherent nihilistic farce out of the story. This doesn’t feel like real life because it isn’t. It takes place in a world constructed by Frances, populated by people who cater to her whims. A séance to locate a missing cat who may, or may not, embody the spirit of her late husband? Sure, and that’s not even her most idiosyncratic request.

At the centre of it all, holding the film together, is Pfeiffer. Monumentally self-absorbed and arch, it comes as no surprise when she gets a waiter’s attention by lighting the flowers on her table on fire. She is given to larger-than-life behaviour, but as farce gives way to tragedy, Pfeiffer takes pains to allow some real humanity to shine through. She is so form-fitted to the character it’s impossible to imagine anyone else hitting the right notes of humour and heartache.

The talented cast stops “French Exit” from becoming a twee Wes Anderson clone. It may not always feel like real life, but its unique feel contains just enough earnestness to make an unreal situation feel real and alive.