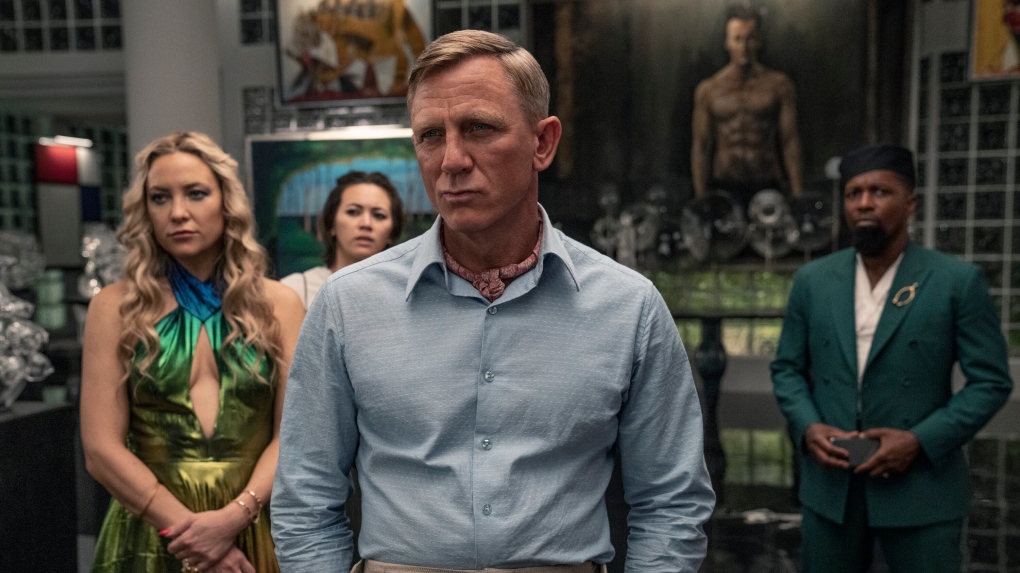 This image released by Netflix shows Kate Hudson, from left, Jessica Henwick, Daniel Craig and Leslie Odom Jr. in a scene from "Glass Onion: A Knives Out Mystery." (John Wilson/Netflix via AP) 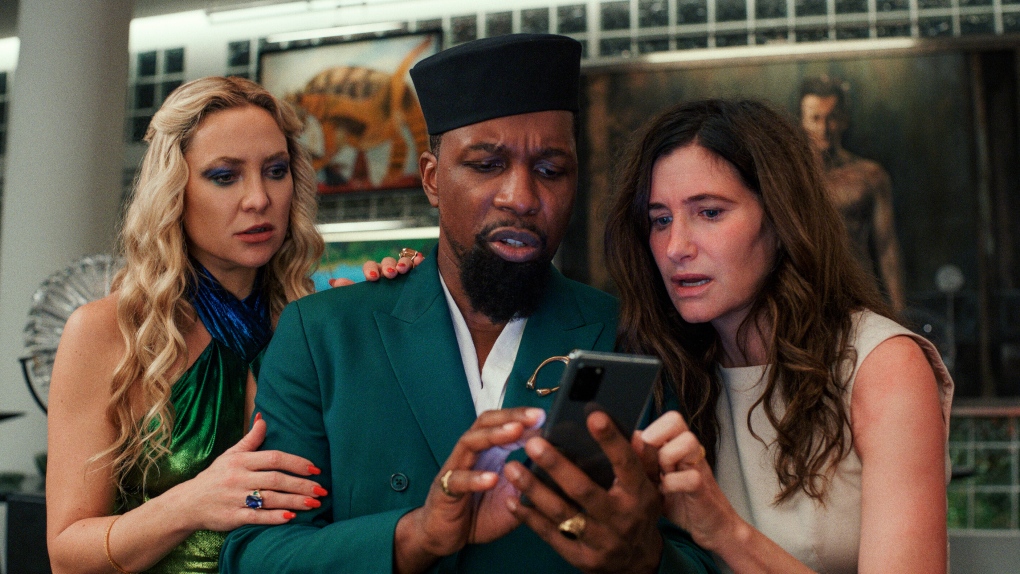 This image released by Netflix shows Kate Hudson, left, Leslie Odom Jr., center, and Kathryn Hahn in a scene from "Glass Onion: A Knives Out Mystery." (Netflix via AP)

"Glass Onion: A Knives Out Mystery," the sequel to the popular Daniel Craig detective movie "Knives Out," now playing in theatres before moving to Netflix in late December, is a satire of old school Agatha Christie with a modern sensibility.

Craig returns as detective Benoit Blanc, "The Last of the Gentlemen Sleuths." He's the American Poirot, with a honied Southern accent and a Jessica Fletcher-esque knack for being present when people are murdered.

In the new film he finds himself, post COVID-19 lockdown, at a lavish private estate on a Greek island owned by billionaire Miles Bron (Edward Norton doing Elon Musk). Invited by a mysterious third party, it is just the tonic he needs to shake his post-COVID lockdown blues.

"I lose it between cases," he drawls. "I may be going insane. My brain is a fuelled up sportscar with nowhere to go. I need a great case."

"I've invited you all to my island," says Bron, "because tonight, a murder will be committed. My murder."

With clues hidden all over the island, Bron encourages his guests to "closely observe each other. If anyone can name the killer, that person wins our game."

It's all fun and games until a real dead body shows up and everyone on the island is a suspect in the crime.

"Ladies and gentlemen," says Blanc. "You expected a mystery. You expected a puzzle. But for at least one person on this island, this is not a game."

Cue the whodunnit. The characters are all connected, and all have a motive for murder. "This is a case that has confounded me like no other," Blanc says as he peels back the layers of the mystery.

There is a lot of talk of disrupters in "Glass Onion." Each of the guests have caused radical change in their industries, a fact pointed out by Bron as the reason they are all friends. It also applies to writer/director Rian Johnson. He pays homage to a well-worn format, the Agatha Christie ensemble cast and elaborate crime reveal, but breathes new life into the tried-and-true format, updating and disrupting the structure.

Johnson uses all the same stylistic—flourishes, flashbacks, red herrings and diversionary tactics—as Christie did, in books and on screen, but adds a spark, juggling the story's twists, turns and reveals with great aplomb and humour. The result is a swiftly paced thriller that is equal parts silly and suave.

It's become trendy to skewer the rich and ridiculous in film. Recent movies like "Triangle of Sadness" and "The Menu" lay waste to entitlement and privilege, and "Glass Onion" is no different. Bron and his crew of influencers and desperadoes are presented as self-serving, uncaring and absurd -- "What is reality?" shrieks Birdie Jay when the going gets rough -- providing a juicy blast of raucous moral ambiguity as an undercurrent to the murder mystery.

As a sequel that improves on the original, "Glass Onion: A Knives Out Mystery," is a rarity. It may follow a template formatted by Agatha Christie, but like the titular "Glass Onion" itself, Johnson is transparent in his desire to make the mystery deeper, the characters more extreme, and the thrills more thrilling. As Blanc says in the in the film, "This is truly delightful." 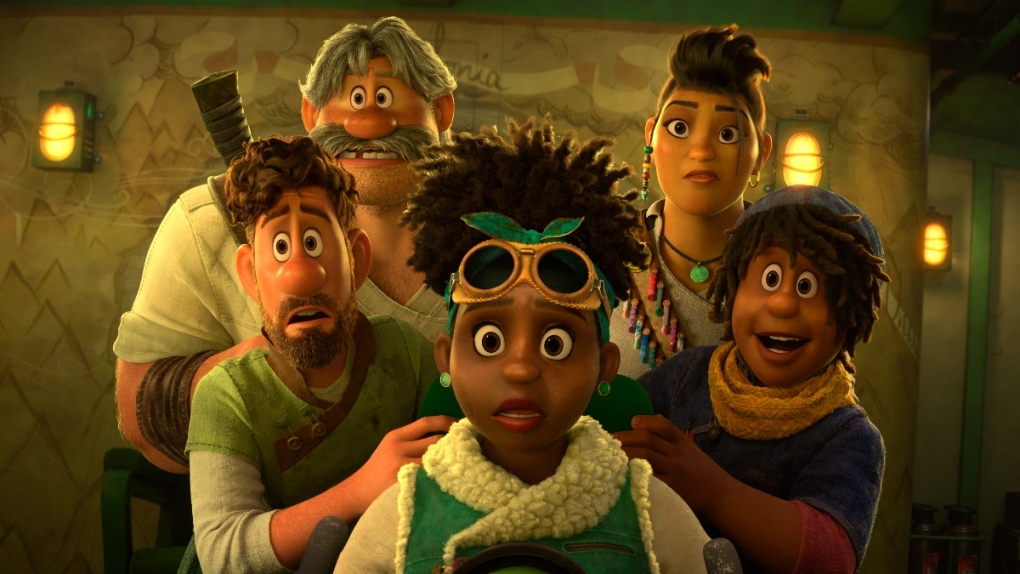 A scene from the animated film 'Strange World.' (Disney via AP)

"Strange World," the new animated film from Walt Disney, starring the voices of Jake Gyllenhaal and Gabrielle Union, is a colourful ode to making the world a better place.

The story centres on the Clades, led by intrepid explorer Jaeger (voice of Dennis Quaid). The Clade clan is devoted to finding a way out of Avalonia, their home and small nation, tucked away between unpassable mountains.

On one of their journeys through the snow-capped mountains -- "Exploration is 'snow' joke," Jaeger snorts as he leads the crew through an icy patch -- searcher (Gyllenhaal) discovers a glowing plant that has a pulsing energy all its own.

Jaeger is unimpressed. Conquering the mountains is his dream, a victory he sees as his legacy. "Avalonia's future is beyond the horizon," he says. Determined to move forward, he leaves Searcher and crew behind with the glowing plant. As he disappears into the wintry wilderness he also leaves behind any semblance of a relationship with his son.

Cut to twenty-five years later. Searcher is now grown up and resembles a cartoon John Krasinski with a bulbous nose. His discovery has literally energized the country. Called Pando, it's a wonder plant that supplies the power that transformed Avalonia into a kind of steampunk paradise. It fuels their airships and keeps the lights on in their homes. "No Pando," they say, "no power."

Searcher is a Pando farmer, alongside his wife Meridian (Union) and son Ethan (Jaboukie Young-White), a teen who is more interested in catching the attention of a local boy named Diego than harvesting the crops.

When the Pando crops begin to fail, Avalonia president Callisto Mal (Lucy Liu) reaches out to Searcher looking for help. The crops all across the land are related by an interconnected root system. When one field fails, eventually they all will.

Getting to the source of the trouble means taking a trip to a strange world that lies under the surface. Callisto Mal recruits Searcher to undertake an expedition but it soon becomes a family affair when Ethan stows away on board and Meridian comes to rescue him. Together they enter a surreal subterranean land, home to amorphous, cute-but-not-so-cuddly blobs, hungry phosphorescent creatures and walking mountains. "We are definitely off the map now," says Callisto Mal.

As they attempt to discover the cause of the Pando blight, they also come across another unexpected find, Jaeger, still searching for whatever is on the other side of the mountain.

"Strange World" puts the action adventure right up front, never missing an opportunity for the characters to take a wild ride of some sort or another. These sequences are imaginative and over-the-top with their stylized action and crazy creatures, but screenwriter and co-director Qui Nguyen isn't just interested in making your eyeballs dance. He's crafted an emotional story about legacy, and how the burdens and expectations of one generation can inadvertently passed to the next. Jaeger and Searcher have obvious father son snags, but the friction between Searcher and Ethan isn't as pronounced, but the issues are the same.

The film does a heartfelt job of essaying the rifts that became chasms over time. Progressive and creative, it casts its eye to a world where respect and acceptance are a balm for troubled relationships.

By the time the end credits roll "Strange World" has established itself as an exciting adventure that values its character-driven messages just as much as the action. 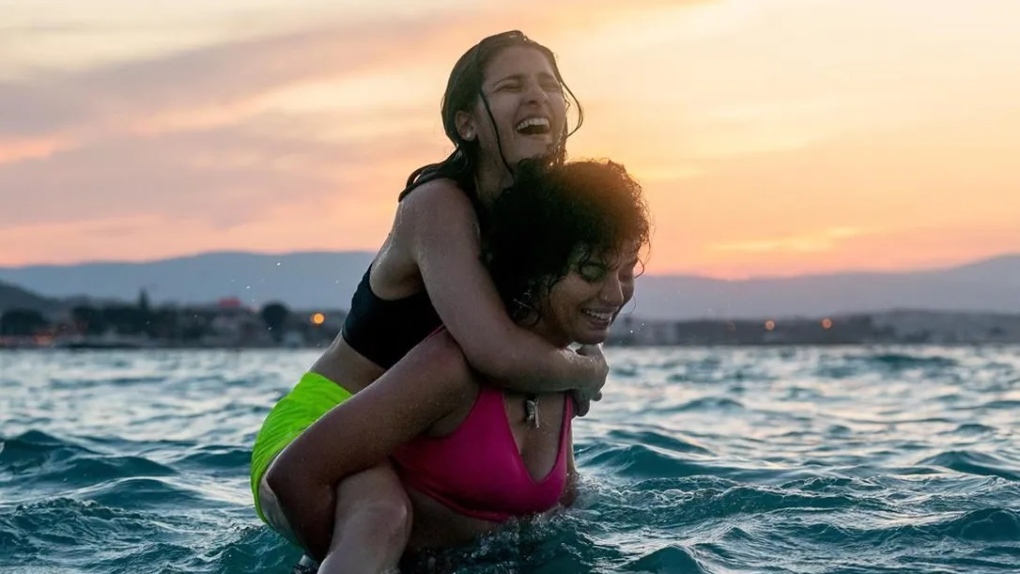 Nathalie Issa as Yursa, and Manal Issa as Sarah (left- right) are shown in a scene from 'The Swimmers,' which will screen at TIFF 2022. THE CANADIAN PRESS/ Laura Radford/HO - Netflix

There has never been a sports drama with this level of adversity. Set against a background of war-torn Syria, "The Swimmers," now streaming on Netflix, tells the incredible and true story of Yusra and Sara Mardini, sisters who fled Damascus to find a new life and a chance at competing in the 2016 Rio Summer Olympics.

The harrowing story of survival, that includes a dangerous voyage in a small lifeboat packed with refugees across the Mediterranean Sea, is inspiring, even if it gives into to its more conventional nature in the third act.

The story begins with a tightly knit family living in Damascus as the Syrian civil war brews around them. Father Ezzat (Ali Suliman), once a professional swimmer, has passed his love of the sport to his daughters Sara (Manal Issa) and Yusra (Nathalie Issa). Both have talent, but Yusra has the drive to be a champion. Both sisters dream of competing in the Olympics, but the ever-escalating war makes that goal unattainable.

After a bomb lands too-close-for-comfort, the sisters make the difficult decision to leave behind the only life they've ever known and seek asylum in Germany. Accompanied by their cousin Nizar (Ahmed Malek) they begin a perilous journey that will hopefully lead to the Olympics.

The sisters' story is, by turns, heartwarming, suspenseful and traumatic. It becomes more of a traditional sports movie, à la "Rocky," near the end, but until that point director Sally El-Hosaini tells the true story of resilience with sensitivity and visual aplomb.

Unforgettable shots of a bomb landing in a swimming pool or a beach, littered with tens-of-thousands of discarded lifejackets left behind by migrants on their way to a new future, speak loudly to a worldwide refugee crisis and are worth the price of admission.