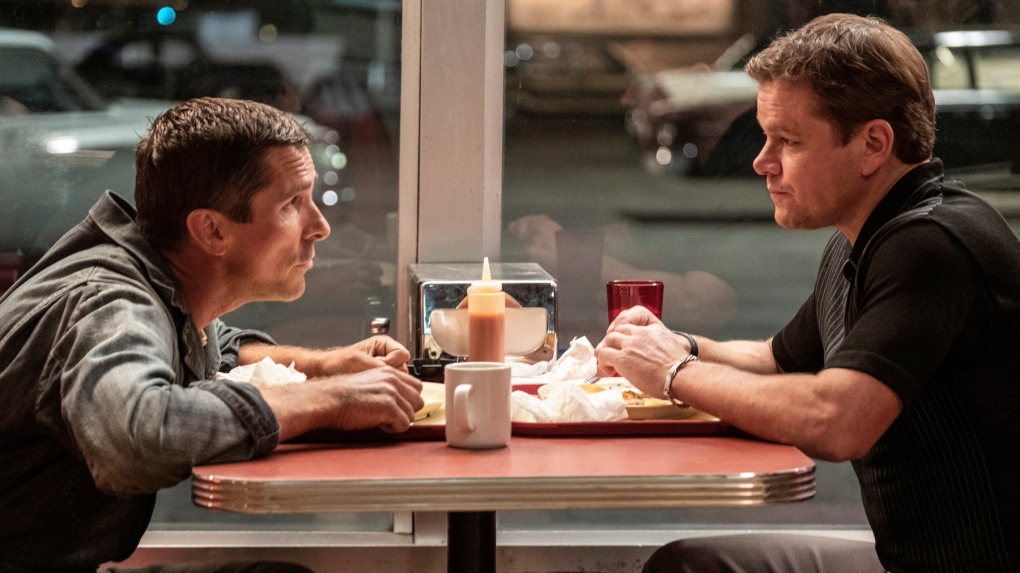 The cars of the early 1960s were sexy beasts. Sleek and metallic on the outside, perfumed with the sweet smell of fine Corinthian leather on the inside, they tore along the highways and byways like, to paraphrase Bruce Springsteen, like big old dinosaurs. The action in “Ford v Ferrari,” however, begins in 1963 with the least sexy thing ever, a failed corporate takeover.

Suffering a slump in sales the Ford Motor Company tries unsuccessfully to take over the infinitely more seductive Ferrari. The Italian car company, on a winning streak with at the 24 Hours of Le Mans, replies in no uncertain terms. “Ford makes ugly little cars in ugly factories,” says Enzo Ferrari (Remo Girone).

“This isn't the first time Ford Motors' gone to war,” he says. “We know how to do more than push papers."

When early attempts to create a race car to take the wind out of Ferrari’s sails fails, Ford marketing executive Lee Iacocca (Jon Bernthal) brings in car designer Carroll Shelby (Matt Damon) to make a Ford that will rule at La Mans.

“My name is Carroll Shelby and performance is my business.” A former racer—he won the Le Mans in 1959 with partner Roy Salvadori—heart problems forced him off the track.

“How long did you tell them that you needed?” he asks. “Two, three hundred years?”

Together they work to make a sports car that will appeal to young consumers and “go like hell.”

Some basic knowledge of how cars work may enhance your enjoyment of “Ford v Ferrari” but the resonate part of the story has nothing to do with horsepower or Gurney flaps. At its fuel-injected heart the James Mangold-directed movie is a David and Goliath story about friendship and burning rubber.

The bromance angle comes in the bond between Shelby and Miles. The two men are like brothers who fight and love in almost equal measure. Damon and Bale share an easy camaraderie, fuelled by their character’s love of the art of racing and the desire to stick it to the big guys, the Ford Motor Company. Shelby is the diplomat, Miles the one more likely to punch a Ford executive, but both are underdogs who take pleasure in making the suits squirm.

“Ford v Ferrari” is formulaic in laying out the story. It’s a longshot tale with revving engines and many predictable twists and turns but Mangold injects some real excitement in the extended racing scenes.

As unbelievable as it may seem Helen Mirren and Ian McKellen have never appeared on screen together. They did a stint on Broadway in August Strindberg's "Dance of Death" but the con job flick “The Good Liar” is the first time they have acted together in a film. It’s been worth the wait. More on that later.

The old-fashioned story of secrets and lies begins in a very modern way, on a dating site for widowed septuagenarians. Mirren plays Betty McLeish, a wealthy widow and retired Oxford professor. She’s upbeat and realistic, looking for new love in the time she has left.

McKellen is Roy Courtnay, a charming but dirty-rotten-scoundrel looking to separate Betty from her cash who complains that the dating site is “a system for matching the delusional with the hopeless.”

Over their lunch he beguiles her and soon romance blossoms. “Do you know who you are?” she asks. “You’re the only person on this planet who makes me feel that I’m not alone.”

When the crafty old guy fakes a knee injury so he can move in with her she agrees it is the second part of his plan (along with a skeevy sidekick played by “Downton Abbey” star Jim Carter) to convince her to sign over her bank accounts, combining their money to provide for their future together. Despite the objections of her grandson Steven (Russell Tovey), she agrees but first they take a trip to Berlin where cracks in their stories are revealed. “In just a blink,” Roy says, “your life is changed forever.”

“The Good Liar” is a b-movie with an a-list cast.

Director Bill Condon has made a nicely crafted cat-and-mouse thriller that for most of its running time rattles along at a good clip, doling out clues like candy at Halloween. It’s when the twists become preposterous that the plot lets down its fine cast. As the story starts swinging for the fences McKellen and Mirren are left batting clean-up, trying to keep the thrills intact while the drawn-out conclusion dilutes the pleasures of the earlier, tension-laden scenes.

It’s a delight to watch McKellen and Mirren’s chemistry. As Roy, McKellen is easy charm one second, hard and cunning the next. Mirren gives Betty a naïve appeal tempered with the excitement of the start of a new adventure. Together they click, belonging together like peanut butter and jelly but nothing is as it seems in “The Good Liar.”

The film’s biggest pleasure is (MILD SPOILER) witnessing these two fine actors carefully gauge their performances as the power dynamic between them shifts. Their work provides the thrills the over-plotted story misses.

Maclean's once called her "Canada's most gossiped-about writer," but what do we really know about Margaret Atwood? Her first book came out fifty-eight years ago and since then she has been a constant presence on bookshelves. The television adaptation of her novel “The Handmaid's Tale” has lived at the very centre of pop culture since its debut in 2017 and she has won every award for writing, including two Bookers and the National Book Critics and PEN Center USA Lifetime Achievement Awards.

But what about the woman behind the words?

Beginning with her earliest memories—the snow in Ottawa, the city of her birth— to writing her first novel at age seven, through to poetry readings at coffee houses like Toronto’s Bohemian Embassy, the all-male library at Harvard (apparently one of the inspirations for “The Handmaid's Tale”) to suggesting CBC’s Hana Gartner read Harlequin Romances instead of her “sad” books, the film reveals a fearsome intellect with a sense of curiosity, humour and self-definition.

“I never thought I’d be a popular writer,” someone quotes her as saying in the film’s opening minutes, “I only wanted to be a good one.”

We learn of the ironies of being a pioneering figure—her first book signing for “The Edible Woman” was at men’s sock and underwear department of a Hudson’s Bay store in Edmonton, chosen because it was near a highly trafficked escalator—and get a rare behind the scenes peak into her private life, including her first marriage to Jim Polk, a student she wed so he wouldn’t be drafted and sent to Vietnam.

To provide contemporary context the directors spent a year filming the septuagenarian as she and her late partner, novelist Graeme Gibson (the film is dedicated to his memory), travel to book signings and speaking engagements, while she works on the final pages of “The Testaments,” the sequel to “Handmaids.”

The linear presentation is linear skips through the events that make up her life, leading to a film that, while it skillfully covers a wide swathe of her life, feels rushed. At just ninety-two minutes it’s a rapidly paced but occasionally superficial telling of the life and work of an important artist.