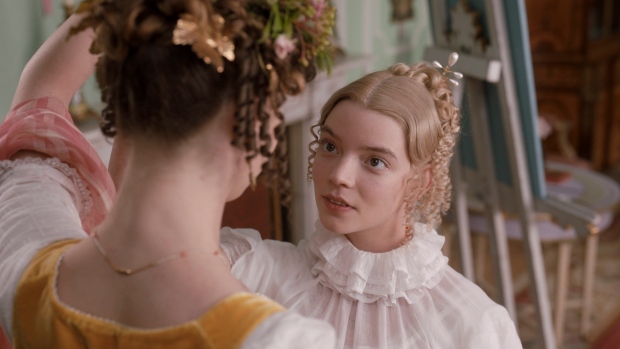 Like the offspring of Jane Austen’s original text and “Clueless,” the 1995 American coming-of-age teen comedy it inspired, the new version of “Emma” is a period piece with a modern sensibility.

Anya Taylor-Joy is the title character, a young woman of high birth. As the opening credits say, she is “handsome, clever and rich and had lived nearly twenty-one years in the world with very little to distress or vex her.” She lives in a large manner house with servants and her father (Bill Nighy), a dour gent who constantly feels a draft. Next door is the wealthy and handsome George Knightley (Johnny Flynn), a landowner who is almost like a brother to Emma.

When she isn’t painting portraits of her friends, Emma meddles in the life of her naïve protégé Harriet (Mia Goth). Harriet loves a local farmer, but Emma, hoping the young woman will marry up, pushes her toward the town vicar (Josh O'Connor). Romantic complications and status problems arise when the impossibly wealthy Frank Churchhill (Callum Turner), who catches Emma’s eye, and the poor but beautiful Jane Fairfax (Amber Anderson) return to town at the same time.

At the heart of every scene is Taylor-Joy. As Emma she is whip smart, arrogant, devious and charismatic, even when she’s being unpleasant. Her journey toward self-awareness is an eventful one, speckled with manipulation, some kindness and casual cruelty.

One of the film’s best scenes involves an offhand remark that deeply cuts a down-on-her-luck acquaintance (Miranda Hart). In this one scene, Emma’s entire attitude toward class is laid bare. She can be cruel and unthinking because the subject of her insult is not of the same social strata. Taylor-Joy brings the mix of sophistication and brattiness necessary to understand why Emma is the way she is. She has lived a life with no fear of social reprisal but will not be able to move ahead until she learns about sensitivity. It’s in there, all Emma has to do is find it.

Every frame of “Emma” is sumptuous, like “Downton Abbey” on steroids, but this isn’t “Masterpiece Theatre.” It brims with life and mischievousness, becoming more alive as Emma inches toward adulthood.

Director Autumn de Wilde has assembled a top flight cast of character actors to decorate the already beautiful scenery. Nighy literally leaps into frame, delivering a deadpan performance tempered with some good physical humour. Hart is both annoying and vulnerable before her character’s circumstance takes a heartbreaking turn. The supporting cast isn’t always given much to do, but each, particularly Goth as a young woman who wears her emotions on her sleeve, help us understand the mosaic of Emma’s life.

“Emma” is a tad too long as the mixed messages and missed connections build up, and the story’s inherent rom com format—there’s even a running to the airport, or in this case a carriage, scene—seems familiar, but retains the wit that has made the story a classic. 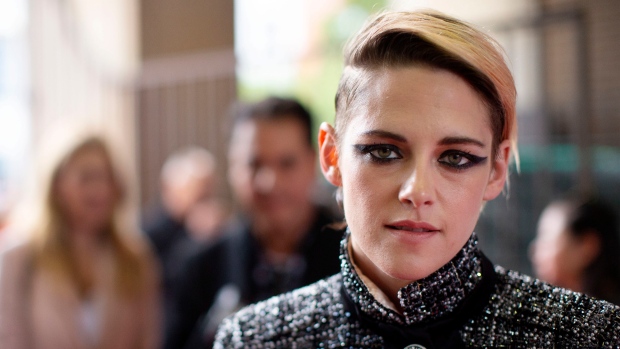 Iowa-born actress Jean Seberg was an as an icon of French New Wave cinema who made 34 movies in Europe and Hollywood. Her signature pixie haircut was a sensation, inspiring a generation to cut their hair and Madonna to copy the look for her "Papa Don't Preach" video. Seberg was a favorite of Jean-Luc Godard and Francois Truffaut who wrote, “When Jean Seberg is on the screen, which is all the time, you can’t look at anything else.”

She was also one of the best-known targets of the FBI COINTELPRO project, an illegal surveillance operation aimed at disrupting American political organizations. A new film starring Kristen Stewart as the star details how the FBI ruined her reputation.

As Australian director Benedict Andrews begins the story, Seberg is already a famous. She makes headlines when she publicly supports the Black Panther Party and privately carries on an affair with Black Power leader, Hakim Jamal (Anthony Mackie). Her interest in political causes—and financial support of civil rights organizations—also attracts the attention of the FBI who place her under surveillance. The big brass are determined to undermine her career, but when Agent Jack Solomon (Jack O'Connell) sees the toll the operation is taking on Seberg’s mental health and her marriage to French novelist Romain Gary, he tries to intervene.

“Seberg” is a by-the-book retelling of the defining time of Seberg’s career, but it never allows us to get to know her. Half the film is eaten up by the procedural aspects of the FBI’s campaign, spending too much time with side characters like Vince Vaughn’s villainous agent and O'Connell’s goody-two-shoes agent. The heart and soul of the story should be Seberg. The thing that should drive the story is how she was pushed to paranoia by the surveillance, not the surveillance itself.

Stewart does what she can with the clichéd dialogue, but the inertness of the storytelling doesn’t allow her to portray Seberg’s innate renegade charisma. 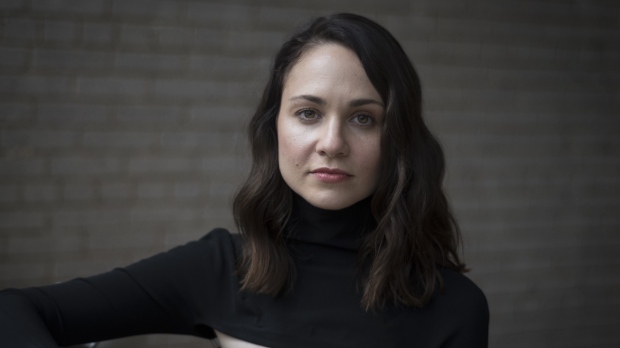 Niagara Falls’ Clifton Hill has no shortage of haunted houses. In exchange for a few dollars, the “World Famous Street of Fun” offers up scary attractions like Frankenstein's Haunted House, but a new film, “Disappearance at Clifton Hill,” isn’t content with a cheap scare or two, it’s looking to make a deeper, psychological impact.

“Downton Abbey’s” Middleton is a woman troubled by a childhood incident. As a little girl on a fishing trip with her parents, she witnessed the kidnapping of a one-eyed boy. Years later, after the death of her mother she returns home to sell the family’s run-down motel, the Rainbow Inn. Sifting through some old photos she comes across some old photos that dredge up memories of the terrible event.

Instead of packing up and leaving town she opens an investigation.

“I’m someone who saw it,” she says. “Saw them take him. I was seven. I was there when it happened and I have proof.”

When she uncovers the story of some local performers, the Magnificent Moulins and their missing and presumed dead son, she wonders if he could be the one-eyed boy. Her sister Laure (Mindhunter’s Hannah Gross) doesn’t believe her story—Abby is a pathological liar—but local historian and podcaster Walter (David Cronenberg) does.

“Do you know what happens when a body hits the bottom of the gorge?” he asks. “Think swallowing a live grenade.”

That would explain why no body was ever found, but it opens the door to a conspiracy that leaves Abby questioning her sanity. “There’s a lot of history round these parts,” Walter says, ominously.

With the soft underbelly of Niagara Falls as a backdrop, “Disappearance at Clifton Hill” effectively creates an eccentric atmosphere that hangs in the air; never forced, never obvious.

Director Albert Shin allows the city’s offbeat setting, including haunted houses and the uber-kitschy Flying Saucer Restaurant, to infuse itself into the offbeat nature of Abby’s story. Like the city itself, her tale isn’t exactly what it seems on the surface.

Middleton subtly reveals Abby’s complexity. She approaches her investigation with a certain amount of naïve zeal, quickly realizing that her obsession is leading her down some very dark paths. Looking for answers, she is fearless in her search for the truth amid the ambiguity of her memory. Supporting her, in a terrific turn is Cronenberg as the only person who believes she is on to something. It could have been stunt casting to bring in a master of the macabre to play a man who specializes in cataloguing the dark side of life, but Cronenberg finds humour in the character while still helping move the story forward.

As a mystery, “Disappearance at Clifton Hill” doesn’t have quite enough intrigue, but as a character study of a person troubled by long ago events, it roars like the waterfall that sits at the heart of its story. 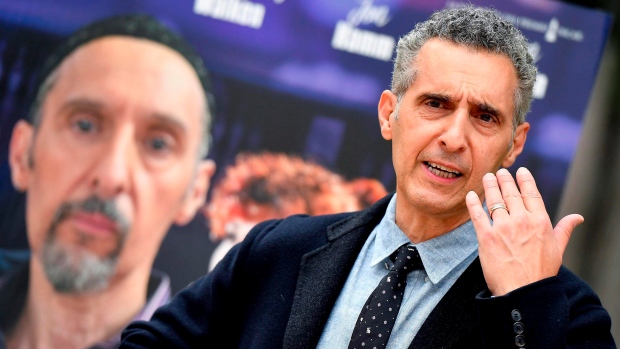 “The Jesus Rolls,” John Turturro’s revisiting of his classic “Big Lebowski” bowling alley character Jesus Quintana, is a story of bad decisions made and acted on but one can’t help but wonder is the worst decision was to resurrect Quintana in the first place.

The ride begins with Quintana leaving Sing Sing prison where he served time for what he calls a misunderstanding about indecent exposure in a public bathroom. Hooking up with his best friend Petey (Bobby Cannavale), he struts and swaggers his way back into trouble starting with the theft of a vintage muscle car. When Petey is shot by the auto’s owner, a hairdresser played by Jon Hamm, they hit the road, putting some space between them and the law. Quintana already has two strikes, another arrest and he’s going to jail and never coming out.

“The Jesus Rolls” is not a “Big Lebowski” sequel. The Coen Brothers gave the OK to bring Jesus back to cinematic life, but Turturro opted to base his story on the freewheeling 1974 French farce “Les Valseuses” (“Going Places”).

Sequel or not, tribute flick or not, “The Jesus Rolls” is a gutter ball. As a character Jesus is best seen in small doses. He’s a standout in “The Big Lebowski” because he’s an oddball in a film that celebrates oddballs. His two scenes are memorable, blessed with quotable dialogue and quirky tics—he licks the bowling balls before launching them at the pins—but a little of him goes a long way. He’s like garlic. One or two cloves adds flavor; the whole head is overkill.

“The Jesus Rolls” may share a character with “The Big Lebowski,” but it has none of its charm. Despite a poignant performance by Susan Sarandon as a woman fresh out of prison and a well-chosen soundtrack, Turturro’s film proves that in the case of Quintana, sometimes less is more.

It’ll take more than a few White Russians to wash “The Jesus Rolls” down.