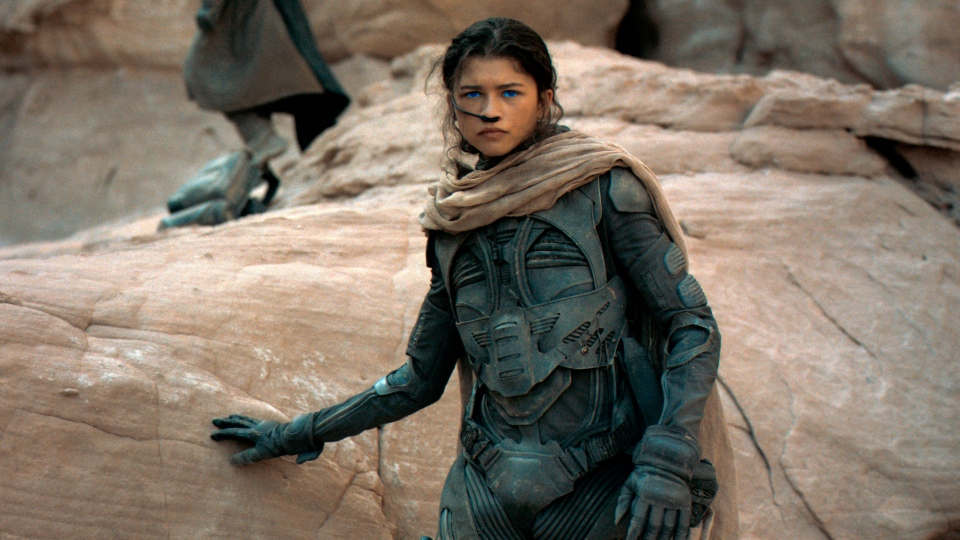 “Dune,” the latest cinematic take on the Frank Herbert 1965 classic, now playing in theatres, is part one of the planned two-part series. So be forewarned, the two-and-a-half-hour movie doesn’t wrap things up with a tidy bow. For some, the film’s last line, “This is only the beginning,” will be a promise of more interesting movies ahead, for others, who prefer tighter storytelling and a clear-cut finale, it may come off as a threat.

Director and co-writer Denis Villeneuve benefits from the parceled-out storytelling. Where David Lynch’s ill-fated 1984 version attempted to cover the complexity of the entire book, Villeneuve is given the time for world building, to explain the various and complex spiritual sci-fi elements that make up the story.

Here are the Cole’s Notes.

Set 8,000 years in the future, the story focusses on Paul Atreides (Timothée Chalamet), son of an aristocratic family and possibly, just maybe, a prophet. His father, Duke Leto Atreides (Oscar Isaac), has been bestowed stewardship of Arrakis, the desert planet also known as Dune. His mother, Lady Jessica (Rebecca Ferguson), is part of the Bene Gesserit, a social, religious, and political alliance who can magically control enemies by modulating their vocal tones.

Their new domain, Arrakis, is a desolate, almost inhabitable place that is home to the Fremen, a group of people who have lived on the planet for thousands of years. It is also the universe’s only source of mélange, also known as "spice.” It’s a drug with the power to extend human life, facilitate superhuman planes of thought and can even make faster-than-light travel possible. It is the most valuable commodity in the universe and those who control it, control everything.

When Baron Vladimir Harkonnen (Stellan Skarsgård doing his best impression of Marlon Brando in “Apocalypse Now”), the former steward of Arrakis, double crosses the Atreides clan, Paul and his mother are left in the desert to die. If they are to survive it will be with the help of the Fremen—including Chani (Zendaya) and Stilgar (Javier Bardem)—who call Paul “The Chosen One” and believe he has the power to bring peace to their world.

Villeneuve lays out the information methodically, allowing the various story points and character motivations to seep into the fabric of the film and make an impact before moving on. There’s a lot to get through, but it doesn’t feel onerous like so many origin stories do.

Also effective are the large scale, and I mean large as in you need three or four eyes to take it all in, action scenes. The entire movie is big. So big it makes even the giant humans Jason Momoa and Dave Bautista, who play swordmaster Duncan Idaho and warrior Glossu Rabban respectively, look puny by comparison. As for the action, Villeneuve pulls out all the stops, staging world ending battles with elegance. Often major battle sequences can be muddled, a blur of colors and glints of metal, but Villeneuve delivers clear cut, tense sequences with a clarity that is unusual for modern action.

“Dune” is big and beautiful, with plentiful action and a really charismatic performance from Momoa. It is unquestionably well made, with thought-provoking themes of exploitation of Indigenous peoples, environmentalism, and colonialism.

So why didn’t I like it more than I did?

Partially because it’s an epic with no payoff. The cliffhanger nature of the story is frustrating after a two-and-a-half-hour wait. As good audience members we allow ourselves to be caught up in the world, humorless and bleak as it often is, to get to know the characters and then what? Wait for two years for the next movie? Apparently so, and the ending feels abrupt.

Nonetheless, “Dune” is formidable. It’s a grim, immersive movie that doesn’t shy away from the darkness that propels the story or the high-mindedness of the ideas contained within.

Eventually, when we have a part two, it will feel like one piece, much like “The Lord of the Rings” franchise, but right now, despite its scope, it feels incomplete.

THE HARDER THEY FALL: 3 ½ STARS 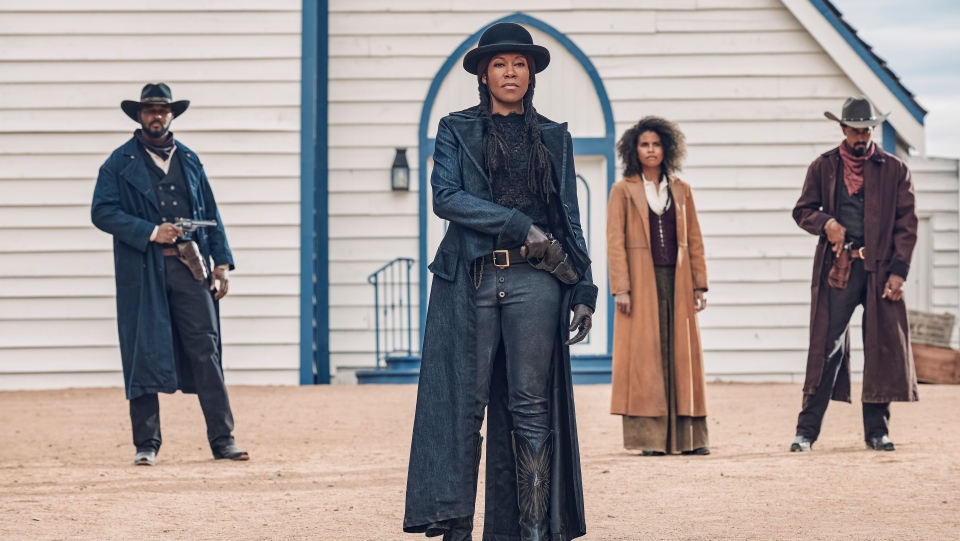 In the annals of the lore of the American West the names of Black cowboys like Nat Love and Rufus Buck don’t loom as large as Billy the Kid or Wyatt Earp. A new movie, “The Harder They Fall,” starring Jonathan Majors and Idris Elba, and now playing in theatres, aims to change that.

“While the events of this story are fictional,” reads an opening title card, “These. People. Existed.”

The film’s story is put into motion when Love, as a child, sees Buck kill his parents. To finish off the heinous act, they let the youngster live, but carve a cross into his forehead.

Cut to years later. It’s the late 1800s and Love is now an outlaw, and gang leader. He’s a kind of Robin Hood who only robs people who rob banks. When he and his gang steal $25,000 Buck planned on using to fund a town for Black Americans, it puts the two men (and their gangs) on a bloody collision course.

As the final showdown between the hunter and the hunted nears, the film flips back-and-forth between the two groups, introducing the characters and, of course, gun fights, bank robberies, and bar fights.

Remember when you first saw “Reservoir Dogs” and it felt like you had entered a parallel universe? It felt familiar, yet new and exciting. That movie was a reimagination of what a gangster movie could be, and the first forty-minutes or so of “The Harder They Fall” gave me the same rush.

It plays with many of the same elements we expect from a revenge style Western, but it feels fresh and daring. The cutting and pasting of styles, from classic Hollywood and bloody b-movies to the anachronistic dialogue and music and charismatic cast, it’s an exciting eyeful. Director Jeymes Samuel has reinvigorated the genre by telling the story through a Black lens, with plenty of stylised spaghetti western action and humour.

The rest of the film is a bit of a mixed bag. The story telling bogs down slightly in the middle leading up to the final shoot out, which has a body count that would make Tarantino proud. Keeping things interesting are the cast.

Cherokee Bill played by Stanfield, has a long scene on a train that makes you wish there could be an entire movie about this character alone. Stanfield’s laid back take on the stone cold killer who claims to abhor violence, but is quick on the trigger, is worth the price of admission alone.

Danielle Deadwyler as the androgynous Cuffee also warrants further exploration. A loyal sharp shooter, they get the job done, but there is a great deal of humanity tucked away under their thousand-yard stare.

At the center of it all is “Lovecraft County’s” Majors. He’s the engine that fuels the action, and it is his story that provides the emotional undercurrent beneath the bloodshed.

“The Harder They Fall” is a crowd pleaser that mixes and matches real life with fiction, tradition with innovation and does so with blood splattered panache. 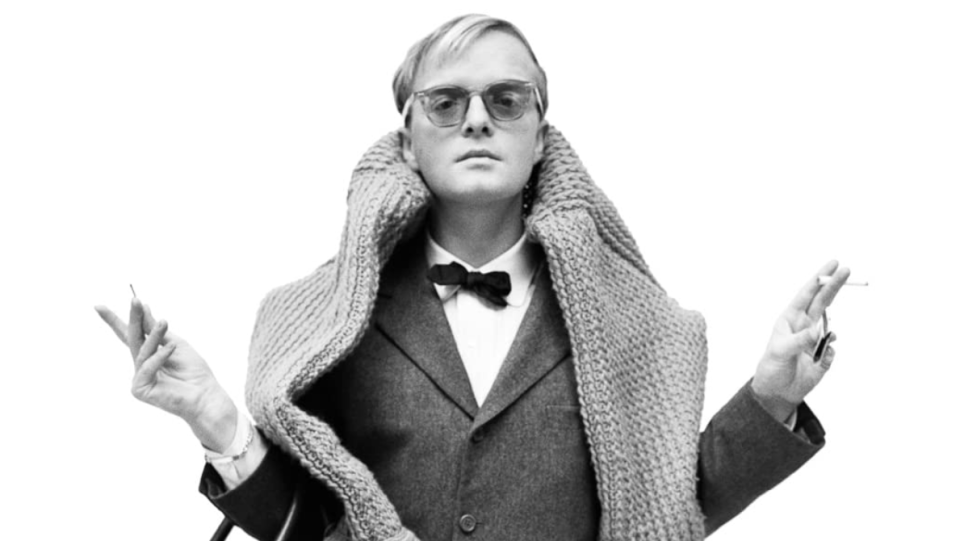 Truman Capote was the best-known literary writer of his day. The author of “Other Voices, Other Rooms,” “Breakfast at Tiffany’s” and the world’s first nonfiction novel “In Cold Blood” was as famous for his nasally voice and trading bon mots with Johnny Carson as he was for his perfectly crafted prose. A new documentary, “The Capote Tapes” from director Ebs Burnough, dives deep to examine the man behind the talk show clips.

He was, by depending on who you ask a, “candied tarantula,” a charmer with a sharp tongue, or “the most lionized writer since of Voltaire.”

His combination of wit and unfettered commentary—"He’s a marvelous performer,” Capote says of Marlon Brando, “but he’s so dumb it makes your skin crawl.”—made him a one-of-a-kind, even in jaded world of New York City high society.

“You looked forward to seeing him because you knew it was nobody else like him,” says Lauren Bacall.

Capote died early, at age 59, but left behind a well-documented life. Burnough uses a combination of archival footage, TV appearances, stills and, most importantly, previously unheard audio interviews George Plimpton conducted for a book he never wrote. Some of the footage will look familiar to Capotians, particularly the well documented 1966 Black and White Ball at the Plaza Hotel in New York City, but the audio tapes are exciting and provide new insight.

Interview subjects like Capote’s pal Dotson Rader dig deep, offering up suggestions that the writer never felt loved even though he was adored by millions. Norman Mailer describes Capote’s courage in living as an openly gay man in a repressed era.

The coverage of his literary career, particularly the “In Cold Blood” saga—Capote may have allowed himself to become too close to the story’s subjects—covers familiar ground. It isn’t until the film’s latter half when it explores the writing of “Answered Prayers,” Capote’s ten-years-in-the-making novel on New York’s not-so-polite-society that Burnough tills new ground.

The book was never finished, although he did manage to pound out three chapters of gossipy secrets about his closest friends before his death. Published in excerpts it was reviled as a literary work and destroyed the goodwill Capote had built among the wealthy women he called “his swans.” It was the end of Capote as a great writer and raconteur, and soon he soon lost the battle with booze and drugs.

Was the book simply ahead of its time? Was it Capote’s prescient unveiling of the tell-all celebrity culture that would soon become the norm by way of reality television or was it a misguided attempt at exposing the world around him? The film leans toward the former, but Jay McInerney, interviewed at length, suggests we’ll never know for sure. He’s convinced the book was never finished.

“The Capote Tapes” is a compelling portrait of a pioneer, a brilliant gay man who came from humble beginnings to rise to the top of the literary world on his own terms, even if those terms were ultimately his undoing.

Movie reviews: Despite stand out performances, 'Ghostbusters: Afterlife' is a ghost of the original

Movie reviews: 'Belfast' is an earnest film that paints a vivid picture of a time and place

Movie reviews: 'Last Night in Soho' an enjoyable ride through a part of town and time that no longer exists

Movie reviews: 'Mass' is a beautifully acted study in misery

Movie reviews: 'No Time to Die' is a James Bond film unlike any other

Movie reviews: 'The Many Saints of Newark' settles for less as an exercise in nostalgia