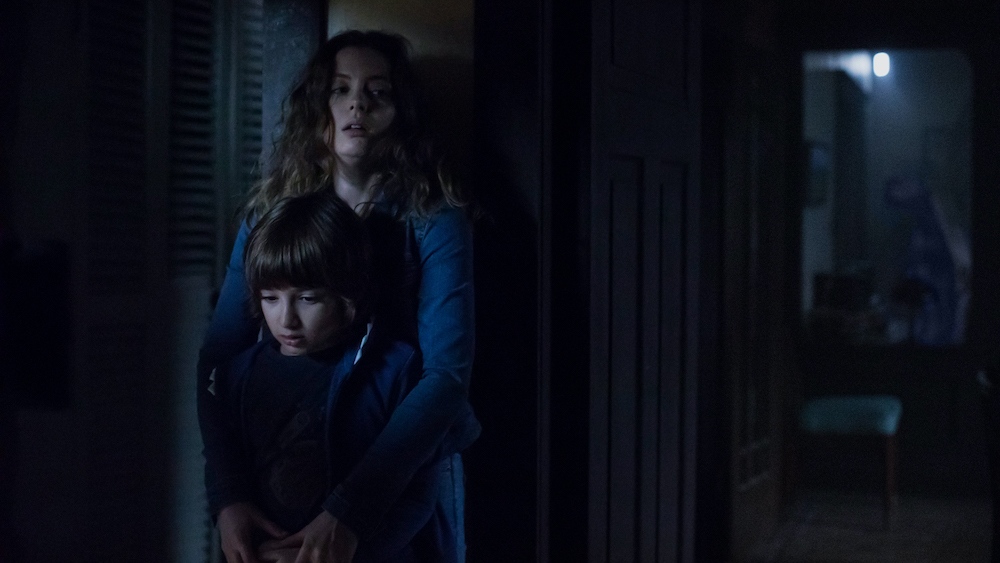 Gillian Jacobs and Azhy Robertson are seen in a still from the film 'Come Play.' (Focus Features) 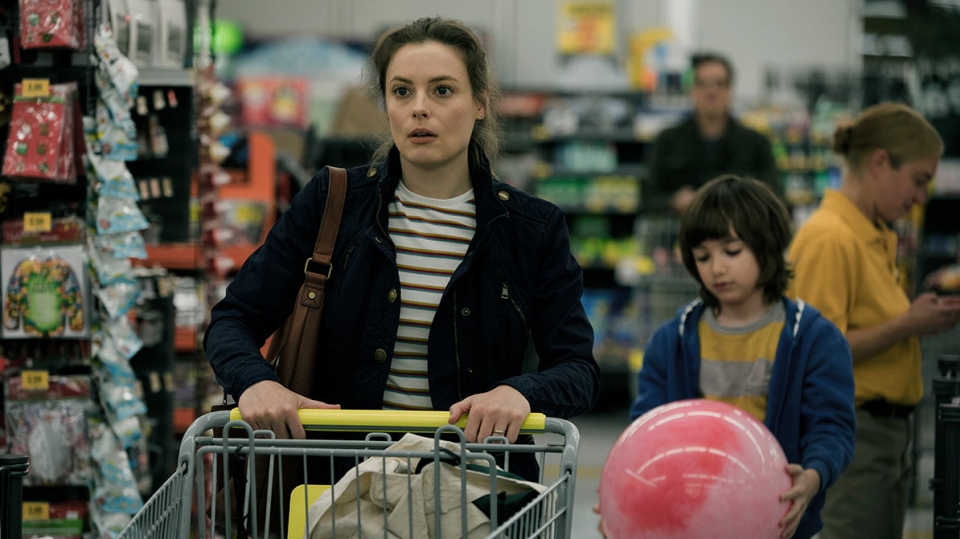 If parents weren’t already considering limiting their kid’s screen time, they certainly will after seeing “Come Play,” a new horror film starring Gillian Jacobs and “Westworld’s” John Gallagher Jr., now playing in theatres. In fact, parents might even think about getting rid of every smartphone in the house.

Jacobs plays Sarah, mother of Oliver (Azhy Robertson), a young autistic boy who has trouble making friends with the other kids in his class. The youngster passes time by playing on his tablet, reading a picture book about misunderstood monsters. When the book’s monster, a long-limbed skeletal creature, who looks like the Slender Man and a Mugwump had a baby, escapes Oliver’s device, Sarah must fight her own disbelief and later, a real threat to her family.

“Come Play” began its life as “Larry,” a short film by Jacob Chase and for better and for worse, Chase hasn’t changed the story that much for its adaptation to feature length.

Part of the beauty of “Come Play” is its simplicity. A study in friendship, the effects of loneliness, divorce, and the complicated relationships kids have with “the other,” the movie is a slow burn that gives the viewer time to immerse themselves in Oliver’s world. It effectively builds an atmosphere of evolving tension, but it takes time.

Chase isn’t interested in easy scares, he’s making something larger -- a monster movie that is an allegory for childhood loneliness and alienation. There is the odd jump scare but the tension comes from the story’s suspense and the connection to the characters. Oddly, for a monster movie of a sort, the creature is the least compelling part of the film. His bony limps and toothy snarl are the stuff of nightmares, but the story is about much more than a boogeyman.

Unfortunately, I can’t tell you more without giving away a plot point, but I can say that the creature, Larry, represents more than simple terror.

“Come Play” is short on story but long on ideas. It’s a horror film that isn’t afraid to not be outright scary. Instead, it mines psychological and primal fears to create an unsettling story. 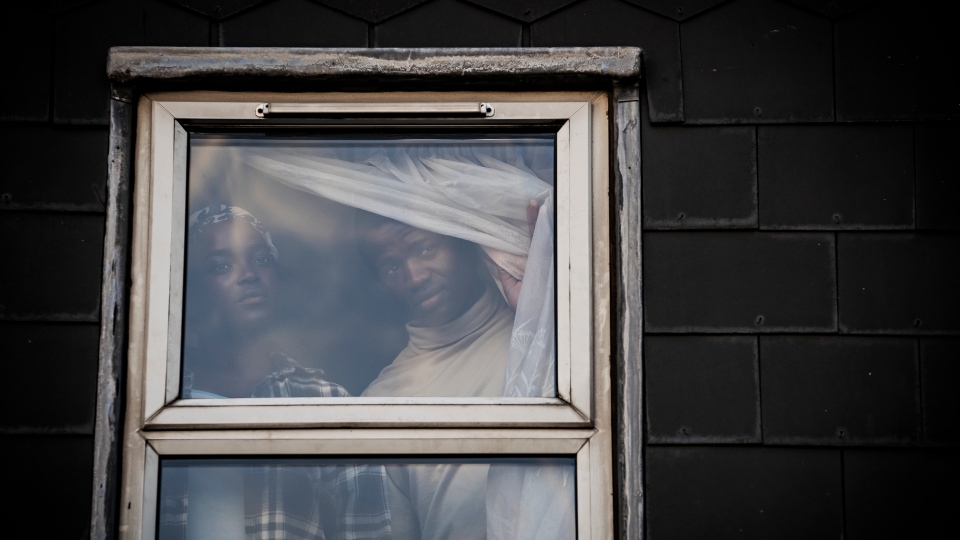 Haunted houses and Halloween go hand in hand. Fairground ghost houses with flickering lights and carnies dressed in store bought costumes have been making hearts race and teens scream for decades, but a new movie, “His House,” now streaming on Netflix, brings those cheesy thrills into a terrifyingly real world.

Bol (Sope Dirisu) and Rial (Wunmi Mosaku) are refugees from war torn South Sudan. Their journey to freedom is fraught. They’re crammed into buses and pick-up trucks, then loaded on to a leaky boat in rough waters. At sea they lose their young daughter, who drowns when the boat flips.

They survive and land in an English detention centre, living there until temporary permission to stay in the U.K. is granted. While they wait on their claim of asylum, they’re moved into dilapidated community housing. “You will be sent to a home of our choosing,” they are told. “You must reside at this address. You must not move from this address. This is your home now.”

The filthy fixer-upper (to put it mildly) has holes in the walls, garbage piled out front and an evil secret, possibly a spirit from their former country. “There is a great beast in this house,” says Rial. “It followed us here. It is filling this house with ghosts to torment my husband.”

What follows is a classic haunted house film with a deep subtext that breathes new life into the genre’s desiccated, old lungs. Set against a background of cultural displacement, survivors' guilt, and the psychological wounds of a life spent in trauma, “His House” is no “Amityville Horror.” Sure, strange things happen in the home. Voices come from behind the drywall, a spirit appears and dreams manifest themselves in the most horrific of ways, but the context is different.

British writer-director Remi Weekes knows his way around a supernatural thrill, but he also weaves in real life experiences of racism, otherness and genocidal suffering into the story, forming a rich tapestry of chills -- some from beyond our mortal coil, some not -- that move the tired, old haunted house horror story to new, deeply felt places. It may drag in spots, but “His House” is a thrilling rethink of what the genre can be. 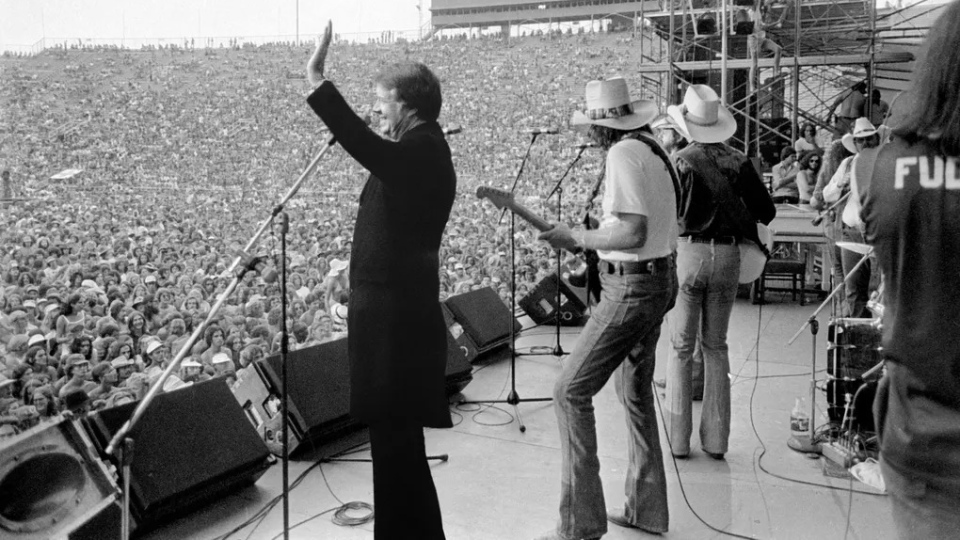 Depending on your age, the name Jimmy Carter can conjure up a variety of images. There’s the elderly man, hammer in hand, leading a construction team for the Habitat for Humanity charity. Older folks may recall him as the American president who pardoned all Vietnam War draft evaders on his second day in office, or the man who famously admitted, "I've looked on a lot of women with lust. I've committed adultery in my heart many times."

What is lesser known is that, despite his strait-laced image, the peanut farmer from Plains, Georgia, who became the 39th president of the United States, was also a music fanatic. A new documentary, “Jimmy Carter: Rock & Roll President,” which actually might have been more appropriately called “Jimmy Carter: Rock & Roll, Gospel, Jazz, and Country President,” is now playing in theatres and on-line in virtual cinemas (see list below). It charts the connection between Carter and the likes of Bob Dylan, Willie Nelson, and the Allman Brothers. “There were some people who didn’t like my being involved with Bob Dylan and Willie Nelson and disreputable rock and rollers,” he says in his distinctive drawl, “but I didn’t care because I was doing what I really believed.”

In the film’s opening minutes, we see Carter, now in his nineties, at home in Plains. He sits in a comfortable chair, a record player at his side and talks about visitors to the home. Bob Dylan hasn’t been, but the Allman Brothers, Willie Nelson and Johnny Cash have all stopped by. He lowers the needle on an LP -- that’s a long player for you Spotifiers -- and grins with joy as the opening notes of “Hey Mr. Tambourine Man” fill the air. The film could have stopped there, as his love of the music is so apparent, but history demands more.

What follows is a collection of newsreel footage, talking head interviews with family and admirers, and some incredible music. Archival film of Ray Charles singing “Georgia on My Mind,” Mahalia Jackson performing “Down by the Riverside,” and Boomer faves like Dylan and the Allmans are worth the price of admission. Carter reminisces that Bob Dylan’s songs permeated the governor’s mansion. “My sons and I were brought closer together by Bob Dylan’s songs,” he says.

More importantly, the film is a portrait of a deeply principled and decent man who rose from a boyhood home with no electricity or plumbing, to the highest office in the land. Director Mary Wharton has made an affectionate film about a time when decency reigned; a movie that seems, these days, like ancient history.

It’s a study in soft power, the ability to attract and co-opt, rather than coerce the electorate. Carter’s genuine love of music, and habit of throwing concerts on the White House lawn, helped shape the public’s opinion of him. That love of music put everyone at ease, including Bob Dylan. The singer says that when Carter quoted his song lyrics to him, “It was the first time that I realized my songs reached into the establishment world. I had no experience in that realm. Never seen that side. It made me a little uneasy, but he put my mind at ease.”

Alongside the musical memories are the political high and low lights from Carter’s term as president. The two sit side-by-side uneasily. The Iran hostage crisis section, for instance, is followed by a performance of “The Devil Went Down to Georgia” by the Charlie Daniels Band. In Carter’s case, the political and the artistic are two sides of the same coin, but the mix and match give the film a disjointed feel.

Despite its flaws, “Jimmy Carter: Rock & Roll President” is a worthy film about a worthy man.

Find the movie in theatres and on virtual cinema here:

Movie reviews: 'The Croods: A New Age' hasn't evolved much since 2013

Movie reviews: 'Ammonite' is a complex study of love, despite its simple plot

Movie reviews: 'Let Him Go' is a love story disguised as a crime drama

Movie reviews: 'The Secrets We Keep' a gritty film about trust, survivor's guilt, and secrets

Movie reviews: 'On the Rocks' is laugh out loud funny, for a time anyway