Movie reviews: 'Bros' is a crowd-pleasing take on a Hollywood staple

Movie reviews: 'Bros' is a crowd-pleasing take on a Hollywood staple 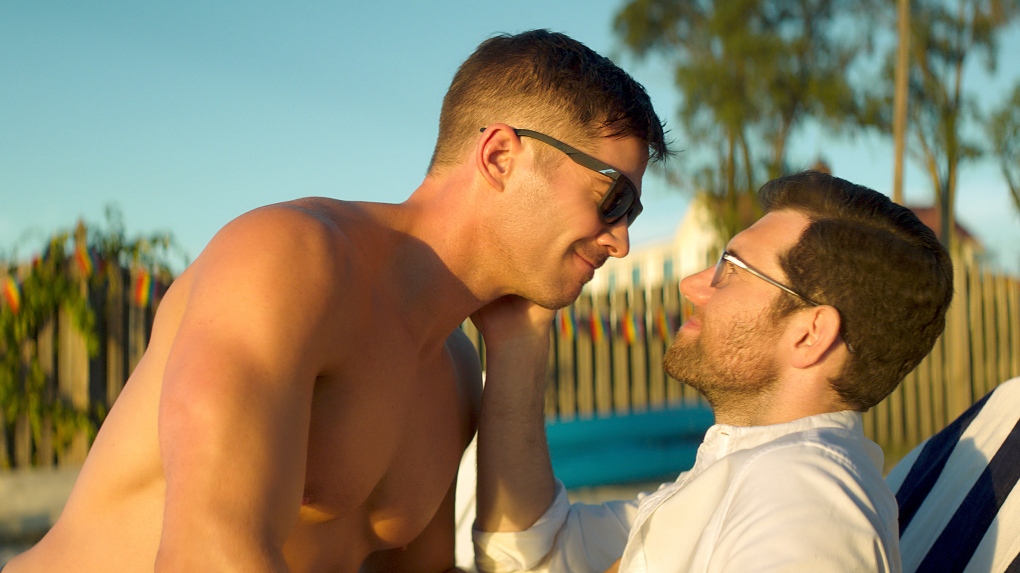 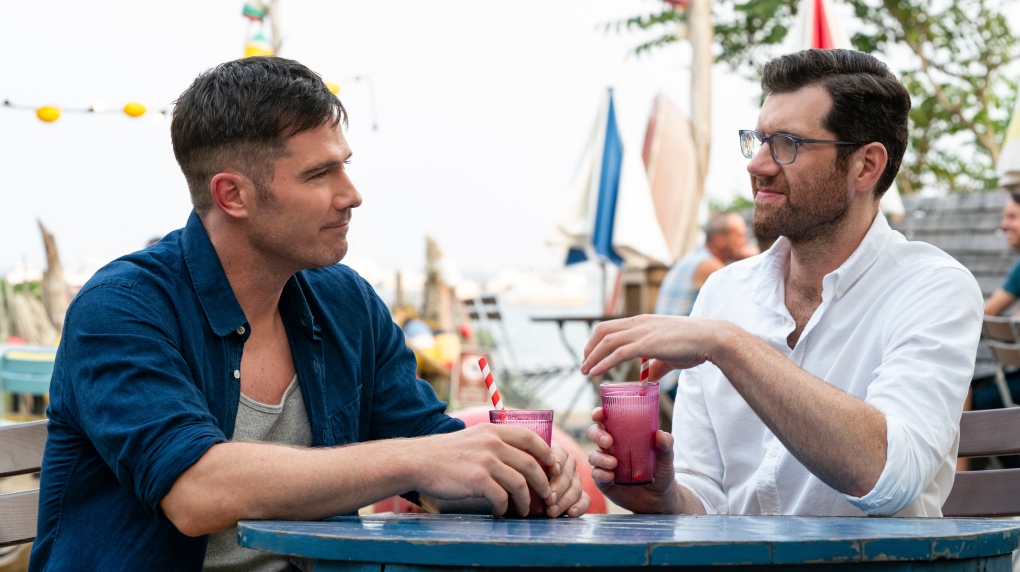 "I'm not the person to write a rom-com," says Billy Eichner as the acerbic Bobby in “Bros,” the first major studio LGBTQ2S+ rom-com to play exclusively in theatres.

It’s a meta line in a movie that is both subversive and cliched. Star, co-writer and producer Eichner has melded frank sexuality with rom-com conventions to create a funny, sincere movie that kicks the celluloid closet door wide open.

Eichner, the former host of the guerilla-style talk show “Billy on the Street,” plays Bobby, a gay, commitment-adverse podcaster. “I’m like whatever happened to Evan Hanson,” he says.

For Bobby, random and anonymous Grindr hook-ups are a way of life until he spots handsome Aaron (Luke Macfarlane) in a club. At first, they appear to be polar opposites. “I don’t think he’s my type,” says Bobby. “He’s like a gay Tom Brady.”

But soon, their mutual fear of commitment brings in the glue that bonds them. “Maybe we can be emotionally unavailable together,” Bobby says.

The confirmed bachelor who meets his partner is a standard rom-com set-up. “My whole life, I prided myself on being self-reliant,” says Bobby. “But this f***** has gotten into my head.”

But this story about the difficulty of dating is given a facelift by a meta joke about writing a gay rom-com and the addition of steroids, thruples, a hat shaped like the Stonewall Inn and extensive use of Grindr.

“Bros” has echoes of “When Harry Met Sally” and “You’ve Got Mail” throughout. It’s a pure rom-com from the nice apartments, New York City backdrop and the trademark Drew Barrymore misunderstanding that leads to a temporary break-up. You know where the story is going, but rom-coms are not about the destination, they’re about the journey and, “Bros” is a fun trip.

Eichner layers this story of self-acceptance and love-at-first-sight with laugh-out-loud jokes, an unexpectedly caustic cameo from Debra Messing, and heartfelt observational humour. It embraces the innate vulnerability and complexity of Aaron and Bobby’s exploration of masculinity and queerness without forgetting the funny.

But just as it makes you laugh, Eichner subverts the form with some more introspective moments. As a gay man with aspirations to chronicle his community, Bobby has a long, earnest monologue about waiting for the world to catch up with him.

“Bros” is a queer rom-com; a subversive, new, crowd-pleasing take on a Hollywood staple.

THE GREATEST BEER RUN EVER: 3 STARS 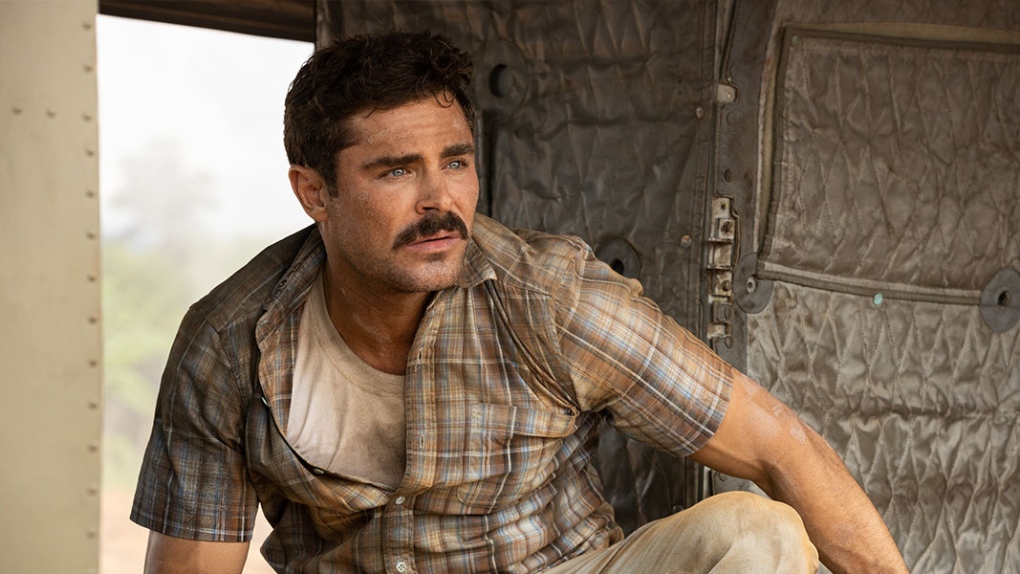 Scene from 'The Greatest Beer Run Ever' (Courtesy of TIFF)

Heartwarming is not a word often used to describe movies based on the Vietnam War, but “The Greatest Beer Run Ever” is no “The Deer Hunter,” “Platoon” or “Apocalypse Now.” It’s an occasionally glib, often naive movie that studies the timely issue of the gap between the press and the public, and the horrors of war.

“Green Book” director Peter Farrelly presents another hard-to-believe-it’s-true story, set during the height of the Vietnam War in 1967.

Zac Efron plays an aimless, but well-meaning merchant marine named John "Chickie" Donohue, a playful patriot who accepts a dare from the guys at his local N.Y.C. bar to track down his army buddies in Vietnam and deliver good old American beer to them as a thanks for their service.

“It’s not going to be easy,” he says. "But I’m going to show them that this country is still behind them.”

With a duffle bag full of Pabst Blue Ribbon, he makes his way into the heart of the conflict, hanging out with hard-nosed war correspondents like Arthur Coates (Russell Crowe), and getting in over his head, but nonetheless, handing out “sudsy 'thank you' cards” to soldiers on the frontlines.

At the heart of the film is Efron in his meatiest role in years. His eager performance matches the tone of the film. He’s a charismatic actor who plays up Chickie’s good-natured, guileless side. Even as the weight of the war bears down on him, he’s still tossing chilly PBRs to his buds with a grin. He’s fine, but his trip to Vietnam feels more like a goofy—but dangerous— adventure and not a serious journey of self-discovery. He does find his way to a new understanding of the world, but the movie meanders along the way to revealing his enlightenment.

“The Greatest Beer Run Ever” is a Vietnam War movie with a twist. A story of loyalty and friendship, it comes with good intentions, even if it leans into its crowd-pleasing aspects a little too heavily. 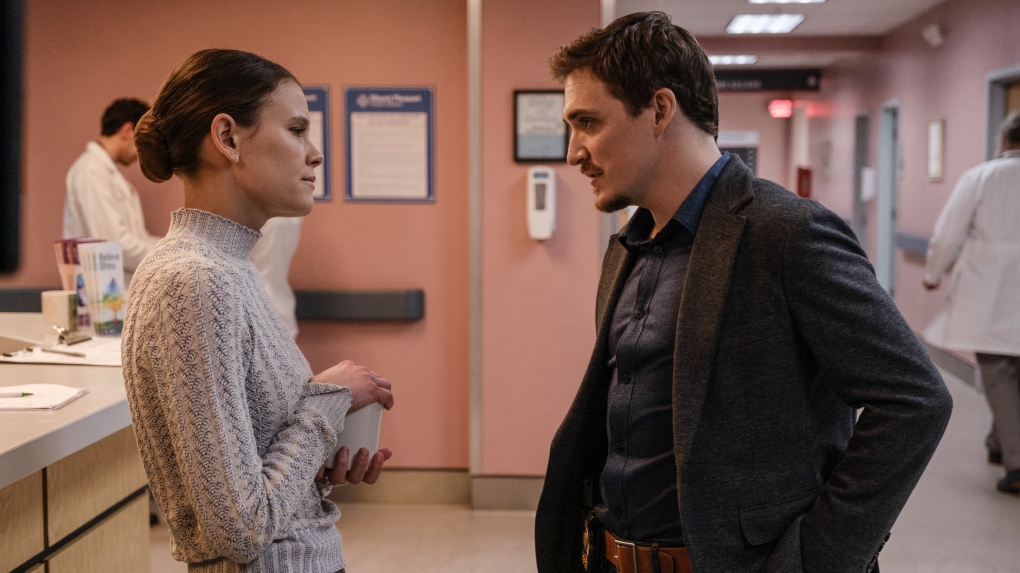 We’ve all heard it. “You should smile more.” But what if there is nothing to smile about?

Sosie Bacon, daughter of actors Kevin Bacon and Kyra Sedgwick, stars as Rose Cotter, an emergency room psychiatric doctor. A traumatic incident from her past is brought to the fore when she meets a patient named Laura (Caitlin Stasey). In distress after witnessing someone take their own life, the woman is convinced she is being tormented by an entity who “wears people’s faces like masks.”

“It’s smiling at me,” she says. “But not a friendly smile. It’s the worst smile I’ve ever seen in my life.”

As if that wasn’t unnerving enough, the grinning, shape-shifting spirit utters death threats that only the frantic Laura can hear.

Rose, who, as a child, saw her mother die by suicide, has empathy for Laura, but the young woman’s torment is too much to bear and she kills herself in front of her doctor. Shaken to the core, Rose takes a week off work, but is soon overwhelmed by the same kind of visions that besieged Laura. “I’m really afraid something bad is going to happen,” she says. Is it PTSD from trauma or has the Laura’s evil been transmitted into Rose’s psyche?

As her relationships with her sister (Gillian Zinser) and fiancée (Jessie T. Usher) crumble, she turns to Joel (Kyle Gallner), an ex, who happens to be a police officer, for help, but time is running out.

“How long between each victim’s death?” Rose asks Joel. “None of them lasted longer than a week,” he replies. “Today’s my fourth day,” she says ominously.

“Smile” has an intriguing premise—although the idea of a transmittable evil has been done before, and better, in movies like “It Follows”—an anxiety inducing soundtrack and some unsettling imagery, but as far as real scares go, they’re as rare as smiles in the paintings of Hieronymus Bosch.

Director Parker Finn, whose short film “Laura Hasn't Slept” was the basis for this movie, creates a palpable atmosphere of dread, and knows his way around a jump scare, but is unable to hold that tension all the way through the movie’s too-long running time. At 115 minutes, “Smile” stretches the already thin premise to its breaking point. What could have been a tight 90-minute thriller, with compact thrills, outstays its welcome with a slowly paced finale that doesn’t deliver anything new.

There are some nicely staged scenes in “Smile.” A child’s birthday party scene brings the creep factor and the wide smiles of the infected will make you think twice the next time someone flashes a grin your way on the street, but the nitty gritty -- the examination of trauma as a source of evil -- does not turn that frown upside down. 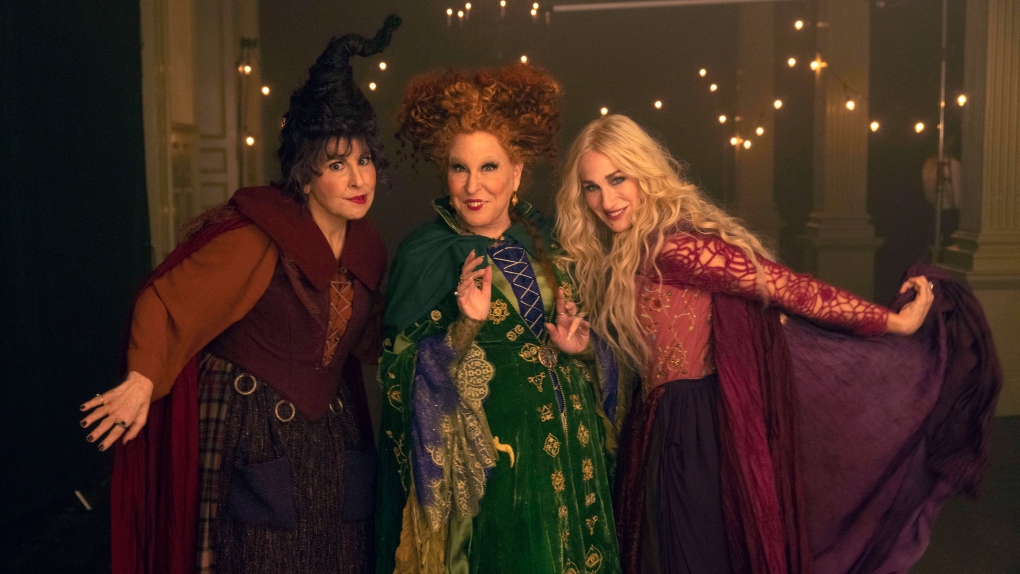 "Lock up your children," says Winifred in “Hocus Pocus 2.” “Yes Salem. We are back!"

Twenty-nine years ago, the original “Hocus Pocus,” a comedic fantasy about the Sanderson sisters, a trio of witches played by Bette Midler, Sarah Jessica Parker and Kathy Najimy, was a middling hit in theatres, and labelled “dreadful” by Gene Siskel.

But despite critical lashings and a current score of 39 per cent on Rotten Tomatoes, over the years, the Sanderson sisters have become Halloween favourites, so much so, that the town of Salem, Massachusetts threw a celebration in honour of the film's 25th anniversary.

Disney+ gives fans another wave of the wand with “Hocus Pocus 2,” a sequel that gives new life to the Sanderson sisters.

The new film begins with a flashback to hundreds of years ago in Salem. The Sanderson sisters, played as teens by Taylor Paige, Nina Kitchen and Juju Journey Brener, become outcasts, sowing the seeds of the rage that will consume them for hundreds of years.

Cut to present day. Salem teens Becca (Whitney Peak), Cassie (Lilia Buckingham), and Izzy (Belissa Escobedo) are best friends, who hang out at the local magic shop run by Gilbert (Sam Richardson). With the help of a special black flame candle, supplied by Gilbert, the teen trio resurrect the sister witches, just as Max (Omri Katz), Allison (Vinessa Shaw), and Dani (Thora Birch) did decades before in the original film.

But Salem is a much different place since the sisters last visited. In the midst of a Halloween celebration, the sisters don’t inspire fear as much as admiration. So many revellers are dressed as the Sandersons, that the city hosts a look-alike contest.

But it’s not all fun and games. The sisters are looking to gather up some tasty teen life-forces and get vengeance for the mistreatment they suffered years before. It’s up to the high schoolers to stop them.

Part horror comedy, part musical (the sisters don’t understand modern day traditions, but somehow are able to belt out Blonde’s “One Way or Another” at the drop of a witch’s hat), and all nostalgia. The spectre of the 1993 flick haunts the new film as it pays homage to the original to the point where the new stars—Peak, Buckingham and Escobedo—get lost in the shuffle once the original sisters show up.

As fans of the first movie might expect, Midler, Najimy and Parker chew the scenery, offering up larger-than-life performances, heavy on the whimsy. They are campy—particularly when singing a revamp of Elton John’s “The Bitch is Back,” reworked as “The Witch Is Back”—and often funny in an outrageous, but family-friendly way.

“Hocus Pocus 2” is fan service. It expands the Sanderson sister’s story, providing an origin story (probably the best part of the movie) and gives Parker and Najimy more to do than the original. Mix in some modern sensibility about accepting people’s differences and you have an hour and 40 minutes of forgettable fun. It’s not nearly as bewitching as the 1993 film, but may cast a spell over longtime fans.

Engineering a pro sports career: How an aerospace studies major joined the Raptors as a coach

The Raptors 905 coach, Eric Khoury, explains how his aerospace engineering studies led him to a career in the NBA.