Movie reviews: 'Amsterdam' is glossy, but it gets lost in its own ambition

Movie reviews: 'Amsterdam' is glossy, but it gets lost in its own ambition 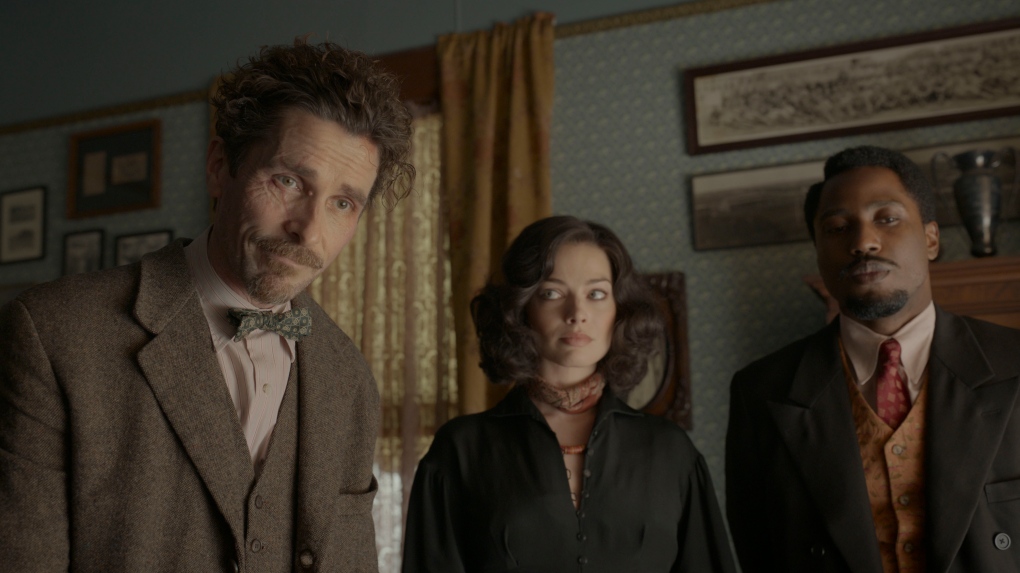 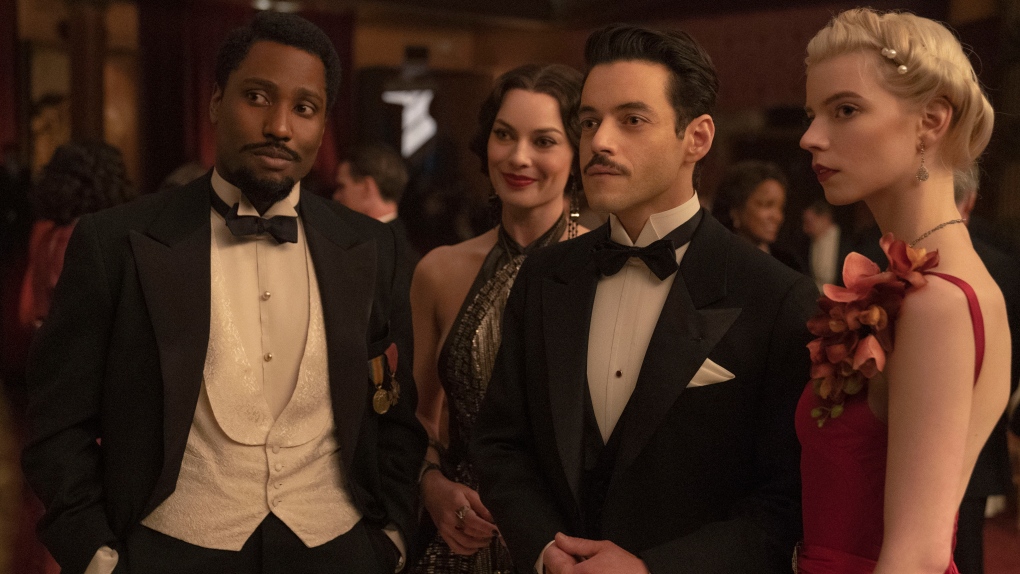 “Amsterdam,” a quirky new film starring John David Washington, Margot Robbie and Christian Bale and now playing in theatres, is a convoluted story fueled by everything from fascism and birding, to murder and music.

If there ever was an example of a film that could have benefitted from the KISS (Keep It Simple Silly) rule, this is it.

The madcap tale begins in 1933 New York City. World War I veteran Dr. Burt Berendsen (Christian Bale), once a Park Avenue physician, now runs a downtown clinic where he caters to the needs of soldiers who return from the war broken and in pain.

When Berendsen and his best friend, fellow veteran and lawyer Harold Woodsman (John David Washington), are hired by Liz Meekins (Taylor Swift), the daughter of their beloved commanding officer, to ascertain the cause of his death, they are drawn into a murder mystery involving secret organizations, ultra-rich industrialists and a crusty Marine played by Robert DeNiro.

In a flashback to the final days of WWI, we learn their backstory and meet Valerie (Margot Robbie), a nurse who treats their wounds, physically and mentally. As a trio, they swear allegiance to one another during an extended bohemian getaway in Amsterdam, a city that becomes a metaphor for freedom and friendship.

Reviewing “Amsterdam” stings. The production is first rate, from Academy Award nominated director David O. Russell, to the a-list cast to the ambitious script that attempts to link events of the past to today’s headlines. But, and this is what stings, the film is definitely less than the sum of its parts.

From the off-kilter tone, part screwball, part deadly serious, to the glacial pacing, which makes the already long two-hour-and-fifteen-minute running time seem much longer, and the script, which casts too wide a wide net in hope of catching something compelling, “Amsterdam” flails about, lost in its own ambition. This is the kind of story, it’s easy to imagine, the Coen Brothers could make look effortless, but Russell does not stick the landing.

He does, however, forward some lovely ideas about embracing kindness and the full experience of being alive, but even those are muddied by the inclusion of heavy-handed, and not particularly original, warnings about domestic terrorism and authoritarianism. Ideas get lost in a sea of exposition and narration, that not even these interesting actors can bring to life.

There may be an interesting story somewhere within “Amsterdam,” but it is hidden, lost in the movie’s epic ambitions. 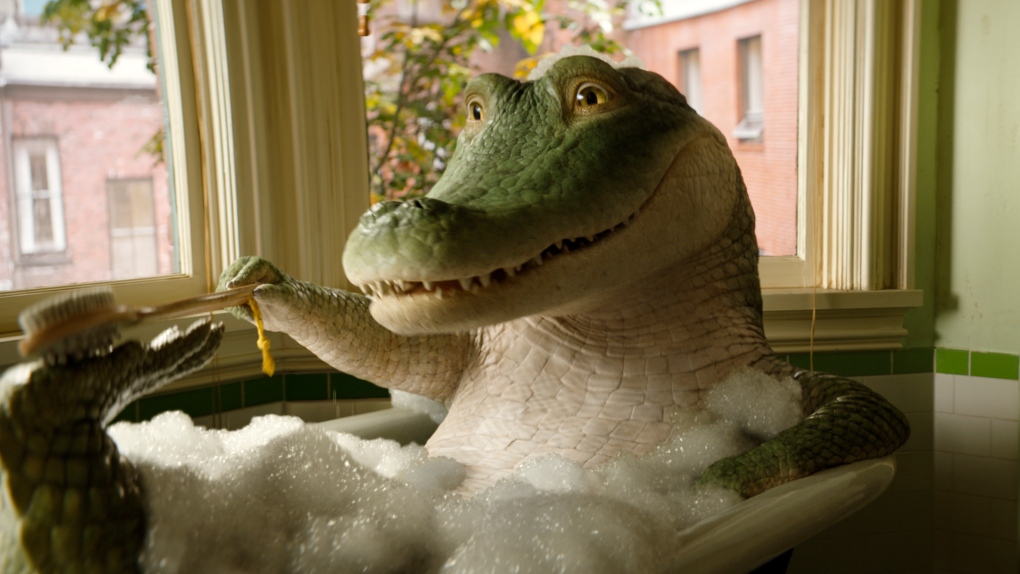 This image released by Sony Pictures shows Lyle the Crocodile, voiced by Shawn Mendes, in a scene from "Lyle, Lyle, Crocodile. (Sony Pictures via AP)

Here’s the pitch. It’s “Paddington,” except with a crocodile.

Based on a children’s book series by Bernard Waber first published in 1965, the story begins as magician Hector P. Valenti (Javier Bardem), on a search to find “something unusual” to spice up his act, finds a singing baby crocodile in the backroom of a pet shop. Hector teaches the talented croc to sing and dance, but stage fright prevents him performing in front of people.

Cut to eighteen months later. The Primm family, which include Katie (Constance Wu), Joseph (Scoot McNairy) and preteen son Josh (Winslow Fegley), who have just moved to New York City, and Josh is having trouble fitting in. The city’s noises freak him out and his best friend is a smart speaker.

One night, after hearing noises in the attic, Josh investigates and finds what he thinks is a large, stuffed crocodile in a glass case. Stuck to the case is a note. “This is my crocodile,” it reads. “Please take good care of him. Cordially yours, Hector P. Valenti.”

Turns out this is no taxidermy display, but the real-life singing crocodile named Lyle, now full grown.

The pair become friends. "He’s not dangerous,” says Josh. “He’s just lonely like me,” he says. But as Lyle becomes part of the family, the unhappy neighbor Mr. Grumps (Brett Gelman) wants him gone, preferably to a zoo.

“Lyle, Lyle Crocodile” is a gently paced family movie about finding family and a voice. It’s an uplifting story, simply told, just like the classic kid’s book, with broad characters. Bardem, in particular, seems to be having fun here — and not too much peril. Most importantly, there isn’t a cynical bone to be found anywhere in Lyle’s cinematic world. He may be a cold-blooded reptile, but he has a warm heart.

Lyle can’t talk, but he can sing, and sing he does. Benj Pasek and Justin Paul of “Dear Evan Hansen,” “LaLa Land” and “The Greatest Showman” provide the tunes, most of which seamlessly fit into the story. As sung by Mendes, with occasional backup from Bardem, the glossy pop songs are anthems of self-empowerment that mirror Lyle’s quest to find a way to be his best self.

You will have to suspend your disbelief to enjoy “Lyle, Lyle Crocodile.” But it’s not because of the singing reptile, as he’s a cute and almost cuddly character you’ll fall for. It’s that the beautiful brownstone the Primms buy on 86th Street in Manhattan sat empty for over a year between the time Hector left and the family moved in. That is weirder than any musical crocodile. 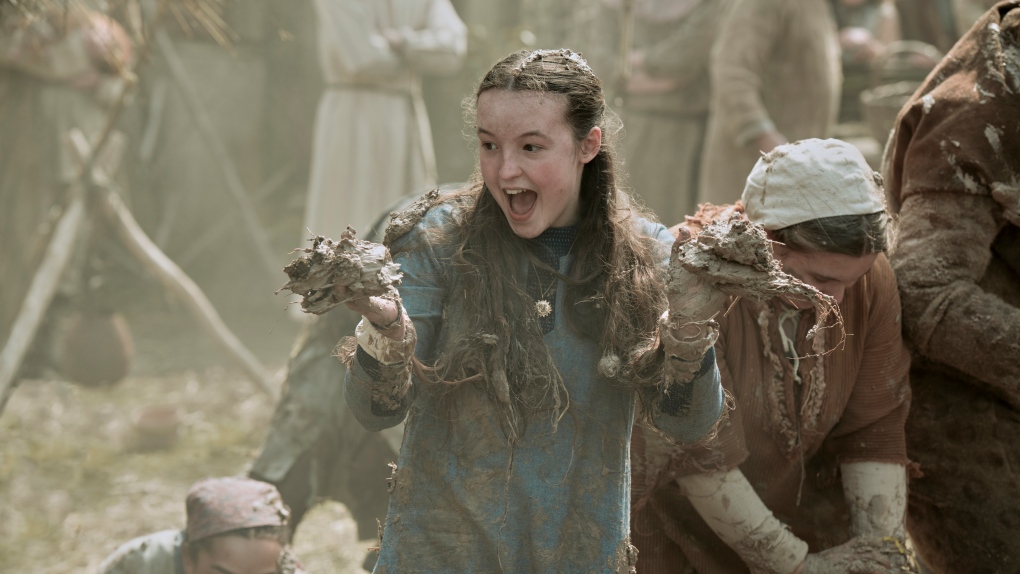 This image released by Amazon shows Bella Ramsey in a scene from "Catherine Called Birdy." (Alex Bailey/Amazon via AP)

In “Catherine Called Birdy,” director Lena Dunham leaves her best-known locale, the gritty streets of “Girls” era Brooklyn, New York, behind in favor of medieval England. Thematically, however, she is walking the same path.

Based on the 1994 novel of the same name by Karen Cushman, the movie follows 14-year-old Lady Catherine (Bella Ramsey), the unruly daughter of a cash-strapped nobleman, as she works to foil her father’s attempts to marry her off to a rich suitor.

Set in a thirteenth century English village that Catherine’s father Lord Rollo of Stonebridge (Andrew Scott) has allowed to sink deeply in debt as he lives the high life, “Catherine Called Birdy” sees the strapped for cash Rollo put his daughter up for auction to the highest bidder. “You’re my daughter,” he says. “If I say that you shall be married, then married you shall be.”

Trouble is, Catherine, who has witnessed six of her mother’s troubled pregnancies, wants nothing to do with marriage and childrearing. She is more interested in the things that any thirteenth century teen might enjoy.

“My truest passions are avoiding my chores,” she says. “Critiquing my father’s horrible swordplay. Disrupting cottage raisings. Causing mischief in the village. And listening through doors I should not listen through.”

She uses her wiles to avoid the altar, finding cunning ways to humiliate her suitors. One by one she scares them off, until Shaggy Beard (Paul Kaye), a wealthy older man who enjoys her manipulations, comes along. “Would I choose to die rather than be forced to marry?” she says. “I do not think either option appealing, or fair.”

Ripe with bawdy humor filtered through Dunham’s feminist sieve, “Catherine Called Birdy” is a period coming-of-age story that, despite the corsets on display, has a modern sensibility. Much of that is due to Dunham’s script, which balances the humor with empowerment, but the real sell job here comes from Ramsey.

In a performance that reveals strength and vulnerability alongside comedic and dramatic chops, the former “Game of Thrones” star not only looks like she just stepped out of a medieval Walter of Durham painting, but she also embodies Catherine’s rowdy spirit.

“Catherine Called Birdy” sags in the middle, but what it lacks in pacing, it makes up for in pathos and charm.

FIFA opened a disciplinary case against Croatia on Tuesday because of its fans' taunts aimed at Canadian goalkeeper Milan Borjan, who has Serbian family ties, during the teams' World Cup game.

The flu shot is one of the best weapons in Canada’s arsenal to combat what health experts are calling a 'multi-demic' of flu, respiratory syncytial virus (RSV) and COVID-19 that is making people sick and straining health-care systems.

Royal Bank of Canada has signed a deal to acquire HSBC Bank Canada for $13.5 billion in cash.