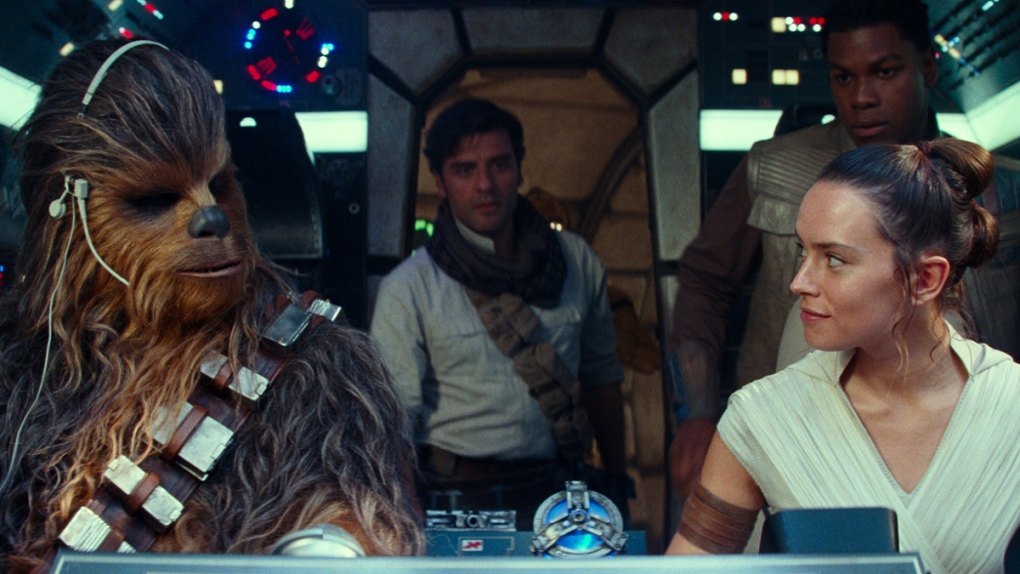 A scene from 'Star Wars: The Rise of Skywalker.' (Disney / Lucasfilm Ltd. via AP)

It has taken forty-two years but the story of the Resistance, begun in "Star Wars: A New Hope" comes to a conclusion in "Star Wars: The Rise of Skywalker." With an amped-up story featuring flying Stormtroopers and much talk of destiny, confronting fear and inner turmoil, the ancient conflict between the Jedi and the Sith promises to deliver big box office, but will it satisfy old school fans who have waited a lifetime for the film's final showdown?

Add to that new characters like diabolical First Order Allegiant General Pryde (Richard E. Grant), Spice Runners of Kijimi leader Zorii Bliss (Keri Russell) and returning faves Lando Calrissian (Billy Dee Williams) and Mark Hamill's Luke Skywalker (in what form I will not say) and you have a blended "Brady Bunch-style" family in space. That is, a complicated intergalactic family dynamic in which not everyone sees eye to eye.

Tasked with wrapping the Skywalker Saga up in a pretty bow director J.J. Abrams has made a film that is part fan service — many familiar faces come along for the ride — and part homage to the Original Trilogy. He replaces subtext with action, rehabilitates one character's tarnished, cranky-old-man reputation (NO SPOILERS HERE) and essentially delivers the movie you expect.

Abrams knows there are no do overs on this one. "Do or do not; there is no try," comes to mind. It is the wrap to one of the most popular and talked-about film franchises of all time. Expectations are high with the possibility of fan backlash ever present. Questions are answered — Rey's parentage chief among them — quips are thrown, Chewbacca howls and star ships are blasted to Kingdom Come as "The Rise of Skywalker," for better and for worse, replaces the nuanced take of Rian Johnson's "The Last Jedi" with the more tried and true Star Wars tale of nature vs nurture and good vs evil.

Jam packed with action and plot, "The Rise of Skywalker" gets bogged down with exposition and tying up loose ends. Worse, it often drifts from the thing that made "Star Wars" great in the first place — the characters. They're all present and accounted for but are often overshadowed by the whiz bang pacing and over-abundance of story.

Having said that, the film's final third, the payoff to the Saga, hits several emotional high points. It's the end of the Saga and, therefore (NO SPOILERS HERE JUST THE FACTS) the final appearances of several members of the original cast. Their exits are handled with sensitivity and should generate a sniffle or two from hard core fans.

The core of the movie is the anguished dynamic between Rey and Kylo. The push and pull between their logical vs biological family commitments is the most compelling part of the story. It also provides for several of the film's most visually interesting scenes, including a climatic lightsaber battle on the wreckage of the Death Star.

"Star Wars: The Rise of Skywalker" ticks a lot of boxes for fans but -- again, no spoilers but be careful -- the mythic battle of good vs evil, of finding balance in the Force, that has fuelled the franchise for forty plus years, was really only going to resolve itself in one way. As such the metaphysical struggle is about the journey and not as much about the actual conclusion.