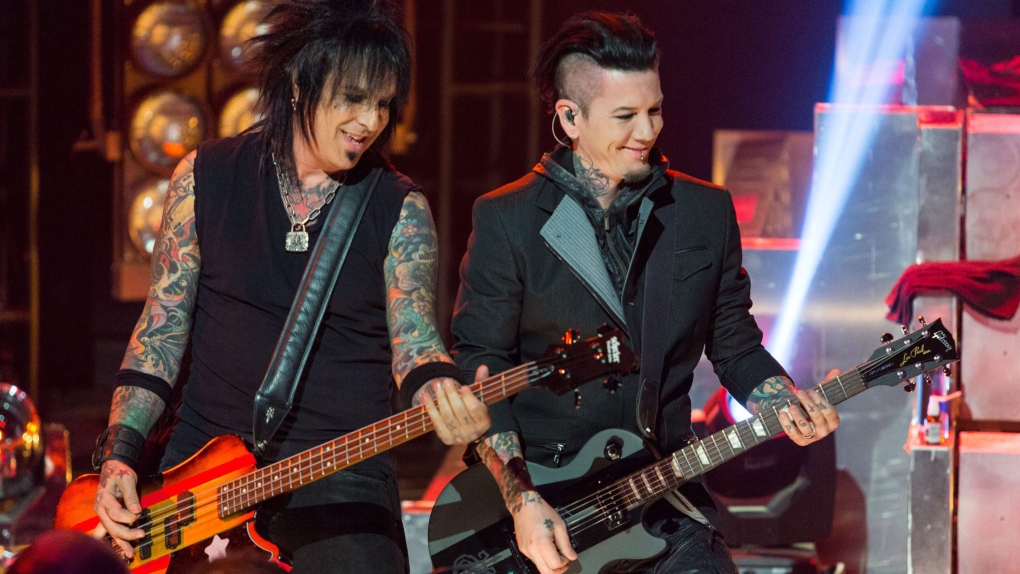 Nikki Sixx, left, and DJ Ashba of Sixx:A.M. perform on stage at the iHeart Theatre in Los Angeles, on Tuesday Oct. 7, 2014. (Paul A. Hebert / Invision)

TORONTO -- Before Motley Crue's depraved decadence became the subject of glam-metal lore, the band got a huge publicity boost from an unlikely source: Canada.

On the band's "Cruesing Through Canada" tour in 1982, the unruly Los Angeles quartet received much boys-behaving-badly cred after several well-orchestrated public-relations hoaxes.

First, they were supposedly arrested at Edmonton International Airport for their spiky clothes and raunchy magazines. Next came a sham bomb threat at their Edmonton show. Before they left, drummer Tommy Lee found time to toss a TV from the steep window of his room at the local Sheraton.

Bassist and primary songwriter Nikki Sixx laughs at the memory now -- but he also considers it the dawn of a strange and fond relationship between Motley Crue and their neighbours to the north.

"Is that when we got kicked out of Canada?" he suggests, chortling, when reminded of the tour during a telephone interview this week.

"It was great because we were so young, we didn't know. We got kicked out of Canada and I remember at the time we were like: 'Good ... riddance!"' he added with an F-led expletive. "We were happy. We looked up to the Sex Pistols. We were like, 'Wow, great, we got thrown out of our first country!'

And so it is that Motley Crue will visit Winnipeg, Toronto, Ottawa and Montreal this year during what they vow is their last-ever tour.

But about that supposed love affair, what makes Sixx so sure of Canada's warmth?

"The music industry is a wonderful thing -- it's completely dishonest and distrustful and will stab you in the back at any given moment," he began. "So as the music industry was driving its daggers into the back of our necks and trying to kill us and pushing us down on our knees, Canada said: 'No! Come back to us, the ones who threw you out.'

"We went up to Canada with the support of Crue-heads and sold Canada out. And all the promoters in America are like: 'We think this kind of music is over.' We said, 'OK, fine, look what just happened in Canada.' And we rented every arena in America and back up through Canada and sold the whole thing out.

"And then all of a sudden, Motley Crue was in fashion again and there were kids walking around malls in shag haircuts. It's amazing."

Now they're going quiet by choice, promising to anyone who will listen that Motley Crue's Dec. 31 show at the Staples Center in L.A. will be the band's last.

With a Japanese tour beckoning, Sixx talked to The Canadian Press about the upcoming "Dirt" film adaptation, his plans for post-Crue life, and his memories of the days when "rock stars ruled the earth."

CP: When you took the stage for the first set of shows on this tour, did it hit you that the end was coming?

Sixx: Yeah. The first night, it was like: Whoa. This is it. This is what we've been talking about for years. The first song we played ... I thought, aw man, I've known these guys longer than anybody. I've seen them at their heights and at their lows and the same for me.

CP: I'm sure you've met people who are skeptical that this is really your last tour. What do you tell them?

Sixx: We tell them that bands lie and that fans don't trust bands that lie. And we could make a list of the bands, but it's not really important. What's important is that we got a corporate lawyer to draw a document up that stops us from touring as a band and we set a date.

We don't want people to go: "Yeah, sure." I've had friends on the inside (say): "Yeah, sure." Don't insult me. Don't say that about my band. We've always done things our way. We always feel that (people) doubt a lot of our choices, from changing our logo to changing our sound and our look. It's been what drives us at the core of everything, that doubt.

CP: Do you think you'll still see the other guys in the band once you're retired from performing?

Sixx: Yeah, they're only an exit away, or a phone call away, or a text away. (Frontman) Vince (Neil) lives in Las Vegas and that makes it a little harder, and (guitarist) Mick (Mars) lives in Nashville. You don't spend this many years with people and never see them again. But I think everyone will look forward to their space to be creative in their own time. Everybody's very creative. I'm a big fan of everyone in the band.

CP: What are you going to get up to, post-Crue?

Sixx: I've got my radio show -- right now we're the world's biggest syndicated rock show. That took five years to build. My band Sixx:A.M., which I have with James Michael and DJ Ashba, has been great. That's always kind of lived in the shadow of Motley Crue because Motley Crue takes up eight, nine months of my year. I'm a father of four and I'm married, and to come home after eight months and go: "Bye, I'm leaving again" -- it's always been difficult to find time to get that band on the road.

The great thing about being successful is that you create a safety net for yourself financially, and you have the ability to then only focus on creativity. You don't have to worry about, well I need to do this for the money. So there's not going to be in my life any cheesy projects that I do. It's going to be super cool, creative stuff and if it fails, so be it. And if it's successful, that's great too.

CP: Do you have an opinion on which actor should play you (in the film adaptation of Motley Crue's autobiography "Dirt")?

Sixx: We all believe that the best actors to play us are unknown actors -- hungry, young, unknown actors. You know Tommy Lee. You know so much about him, and his mannerisms, or Mick Mars or Vince or myself. How can you have a known actor play that? I don't feel it'll be as believable to fans of Motley Crue.

CP: Do you look back on your antics that were captured in the book with pride, or do you have different feelings about seeing that stuff onscreen now?

Sixx: I call it when rock stars roamed the earth. Back when you could depend upon a television being thrown out of a window or a car being crashed in the side of a hotel. It doesn't happen so much now. I think all the cardigans are getting sold out of the thrift stores, and bands are learning to whistle before they learn to do a guitar solo. So for me, yeah, I look back on it and go: "Thank God." Hopefully somebody will come along and replicate and replace that.

CP: What will the scene be like on New Year's Eve at what's supposed to be your last show?

Sixx: I think I'm gonna have my Ferrari backed up to the side of the stage. I'm going to jump in the car, put the top down, and drive up the 405 freeway in Los Angeles in my stage makeup. I'm out of here.

Answers have been edited and condensed.