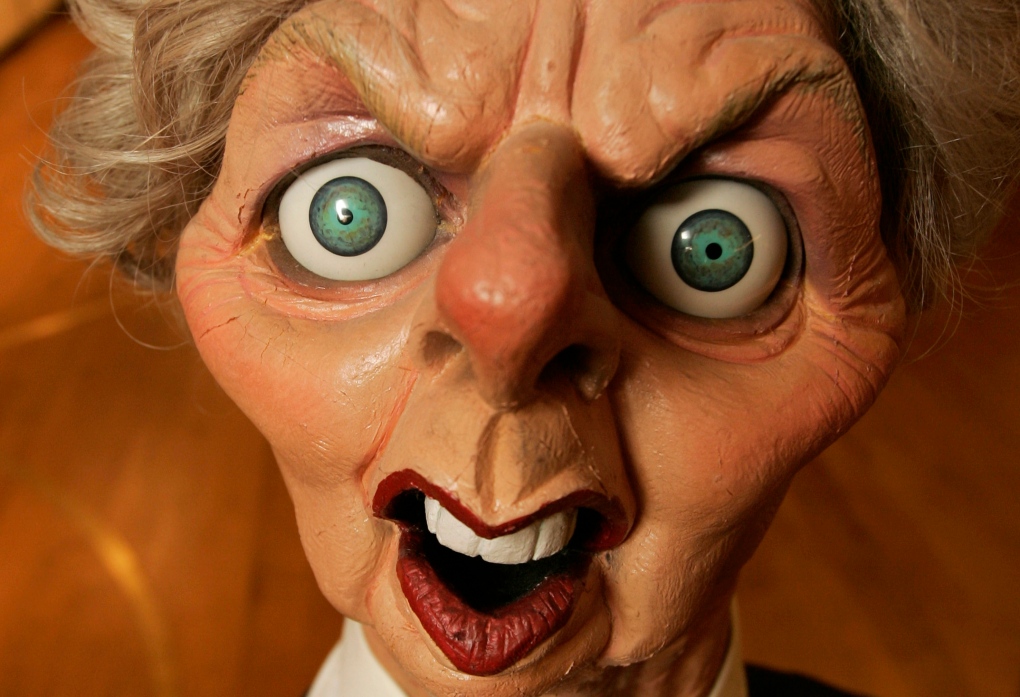 Margaret Thatcher was not just a political titan, she was a cultural icon - skewered by comedians, transformed into a puppet and played to Oscar-winning perfection by Meryl Streep.

LONDON -- Margaret Thatcher was not just a political titan, she was a cultural icon - skewered by comedians, transformed into a puppet and played to Oscar-winning perfection by Meryl Streep.

With her uncompromising politics, ironclad certainty, bouffant hairstyle and ever-present handbag, the late British leader was grist for comedians, playwrights, novelists and songwriters whether they loved her or - as was more often the case - hated her.

Thatcher's free-market policies transformed and divided Britain, unleashing an outpouring of creative anger from her opponents. A generation of British comedians, from Ben Elton to Alexei Sayle, honed their talents lampooning Thatcher.

To the satirical puppeteers of popular 1980s TV series "Spitting Image," Thatcher was a cigar-smoking bully, a butcher with a bloody cleaver, a domineering leader ruling over her docile Cabinet. One famous sketch showed Thatcher and her ministers gathered for dinner. Thatcher ordered steak. "And what about the vegetables?" the waitress asked. "They'll have the same as me," Thatcher replied.

In the U.S., "Saturday Night Live" got in on the act - albeit more gently - making the Iron Lady the subject of several skits. In one of them, Monty Python member Michael Palin played the prime minister shortly after her election in 1979 and poked fun at her helmet of hair.

Pop was political in Thatcher's day, as the bitter social divisions of the 1980s sparked an angry musical outpouring.

"I see no joy, I see only sorrow, I see no chance of your bright new tomorrow," sang The Beat, urging Thatcher to resign in "Stand Down Margaret."

In "Tramp the Dirt Down," Elvis Costello imagined the day of Thatcher's death: "When they finally put you in the ground, I'll stand on your grave and tramp the dirt down."

Musicians including Paul Weller and Billy Bragg formed the Red Wedge movement to campaign against Thatcher and for the Labour Party in the 1987 election.

But for some later musicians, Thatcher was a more positive figure.

Former Spice Girl Geri Halliwell - who sported a Union Jack mini-dress as part of the 1990s' girl group - tweeted Monday: "Thinking of our 1st Lady of girl power, Margaret Thatcher, a green grocer's daughter who taught me anything is possible."

Thatcher has made appearances in several novels written or set in the 1980s.

She was a major, though mostly unseen, presence in Alan Hollinghurst's Booker Prize-winning 2004 novel "The Line of Beauty," set during the height of Thatcher's rule. The prime minister's appearance at a Conservative lawmaker's party - where she send the crowd into a tizzy and dances to the Rolling Stones with the novel's young protagonist - forms the dizzying pivot of Hollinghurst's tale of 80s' power and excess.

Thatcher's transformation into a stage and screen character started not long after she took office. Thatcher's personal papers include an account of an excruciating 1981 evening she and her husband Denis spent at a West End farce titled "Anyone for Denis?"

On stage, Thatcher remains a potent figure, a shorthand for the 1980s. In the Olivier- and Tony Award-winning musical "Billy Elliot," coal miners sing "Merry Christmas Maggie Thatcher," a song with music by Elton John and lyrics that say: "We all celebrate today `cause it's one day closer to your death."

West End theatergoers are currently flocking to see "The Audience," a play about meetings between Queen Elizabeth II and the 12 prime ministers of her long reign. The play is a gentle liberal drama, and Haydn Gwynne's strident Thatcher is gently rebuked by the monarch over her opposition to sanctions against apartheid South Africa.

On-screen, the character of Thatcher had a jokey cameo at the end of the 1981 James Bond movie "For Your Eyes Only," but for left-wing directors, she was no laughing matter. Stephen Frears' "My Beautiful Laundrette" was one of several 1980s films that depicted Thatcher's Britain as a land of poverty and racism as well as economic enterprise.

Others have mined the drama of a hardworking grocer's daughter who became Britain's first female prime minister. In the 2008 TV movie "The Long Walk to Finchley," Andrea Riseborough played the young politician fighting for a seat in Parliament. The next year "Margaret," with Lindsay Duncan, depicted the end of her career via a Cabinet coup in 1990.

The most acclaimed recent screen Thatcher came with Streep's turn as the aged politician looking back on her life in the 2011 film "The Iron Lady." Streep won an Academy Award for a performance that humanized a character still seen, in the words of director Phyllida Lloyd, "either as St. Margaret who saved the nation, or the she-devil who ruined the lives of millions and bred a culture of greed."