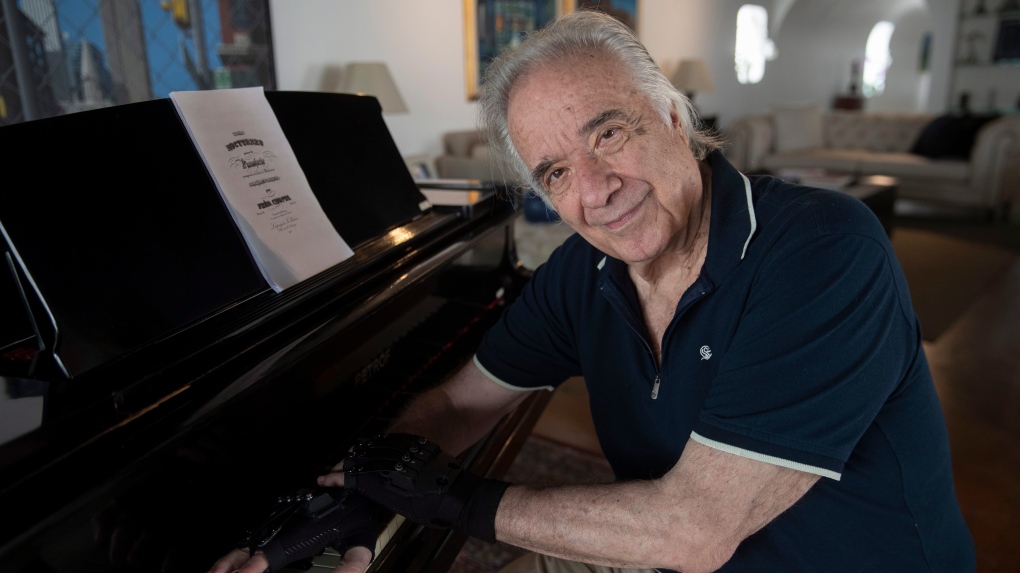 SAO PAULO -- A few days before Christmas, renowned pianist Joao Carlos Martins summoned his friends to a Sao Paulo bar so he could show off the best gift he'd received in decades: a new pair of bionic gloves that are letting the 79-year-old play with both hands in more than two decades.

Considered one of the great interpreters of Johann Sebastian Bach's music, the Brazilian classical pianist and conductor had retired last March after 24 surgeries trying to stop pains from a degenerative disease and a series of accidents. His limitations had forced him to work mostly as a conductor since the early 2000s.

But since the closing days of 2019, friends have been returning to Martins' downtown penthouse to hear him bring Frederic Chopin, Wolfgang Amadeus Mozart and his favourite Bach back to life at his Petrof piano.

Before the gloves, which were especially developed for him, the pianist could only play songs slowly with his thumbs and, sometimes, his index fingers.

"After I lost my tools, my hands, and couldn't play the piano, it was if there was a corpse inside my chest," Martins told The Associated Press.

Martins' health problems date back to 1965. He famously rebounded after every setback -- nerve damage in his arm inflicted during a soccer match in New York, a mugger hitting him over the head with a metal pipe while he toured in Bulgaria, and more. But even friends expected the latest surgery, on his left hand, to mark the end of his days on the piano bench.

That might have been his fate, were it not for a designer who believed the pianist's retirement had come too early. Ubirata Bizarro Costa created neoprene-covered bionic gloves that bump Martins' fingers upward after they depress the keys, and which are held together by a carbon fiber board.

"I did the first models based on images of his hands, but those were far from ideal," Costa said. "I approached the maestro at the end of a concert in my city of Sumare, in the Sao Paulo countryside. He quickly noticed they wouldn't work, but then he invited me to his house to develop the project."

Costa and Martins spent the subsequent months testing several prototypes. The perfect match came in December, and cost only about 500 Brazilians reals (US$125) to build. Now Martins never takes off his new gloves, even when going to bed.

"I might not recover the speed of the past. I don't know what result I will get. I'm starting over as though I were an 8-year-old learning," he said, joined by his poodle Sebastian. His dog's name, of course, is a tribute to Bach.

The pianist's return was first reported by the Brazilian newspaper Folha de S.Paulo. Reporter Ricardo Kotscho said Martins hurried to the bar near his home before Christmas "like a boy who got a new toy."

Martins said he has received more than 100 gadgets in the last 50 years as miraculous solutions to his hand problems. None worked well or long enough.

"But these gloves do. I can even tune them accordingly," he said, showing how he can rearrange the glove's internal pads to play at a faster or slower tempo. "That doesn't mean it's all sorted. The muscle atrophy plays a role. Sometimes I try to play a speedy one and get depressed because it just doesn't happen yet."

The "extender gloves," as their inventor calls them, gave Martins a goal: Play the piano again at New York's Carnegie Hall in October, when he is scheduled to conduct a concert celebrating the 60th anniversary of his first appearance there.

Martins, meantime, is practicing early in the morning and late at night, to the delight of his neighbours, until he can interpret an entire Bach concert perfectly.

"It could take one, two years. I will keep pushing until that happens," he said. "I won't give up."