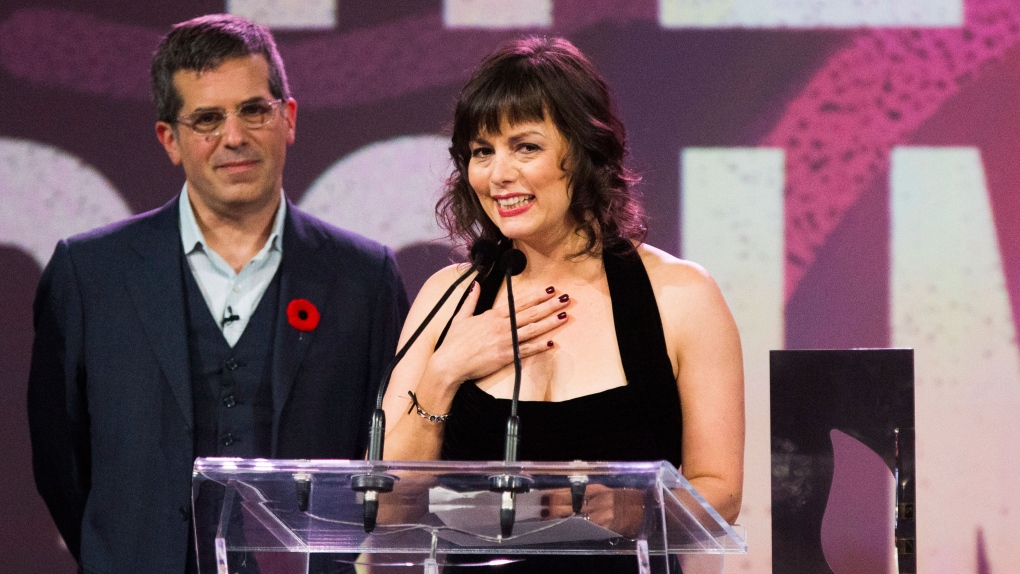 "I almost didn't write this because I thought, 'No, then I will hope,"' Coady, 43, said as she pulled out her acceptance speech onstage.

"I think probably the only way for me to keep it together is just to read from this page, so I'm going to hold on to these pages for dear life."

"I don't even like to cry in private," she added as she grew emotional. "This is very odd for me."

The Cape Breton, N.S., native then thanked her loved ones and her publisher, House of Anansi, which hasn't had a Giller winner in 13 years -- a streak dubbed "the Anansi curse."

She also praised businessman Jack Rabinovitch, who founded the prestigious prize 20 years ago.

"I can't express how honoured I am to play even the smallest part in such an inspiring event," Coady, decked out in a black Stephan Caras gown, told the glitzy, star-packed gala at Toronto's Ritz-Carlton hotel.

Coady, who is known for her comical yet compassionate approach to writing, included eight stories in "Hellgoing" with characters including a young nun and a bride-to-be.

The book is also a finalist for this year's $25,000 Rogers Writers' Trust Fiction Prize, which will be awarded Nov. 20 in Toronto.

Coady, who is also an editor and journalist, was also a Giller finalist in 2011, for "The Antagonist." In '98, her first novel, "Strange Heaven," was nominated for a Governor General's Award.

Her other books include "Mean Boy," "Play the Monster Blind" and "Saints of Big Harbour." She said she's now in a television writing program at the Canadian Film Centre.

Atwood said they chose the winner Tuesday morning. The deliberations were "a good process" with no "blood on the floor," she noted.

Edugyan called the process "wonderfully amiable," adding, "Nobody put anybody in a headlock or anything like that."

"We did it in a drunken stupor," joked Lethem onstage, riffing on the day's headlines surrounding embattled Toronto Mayor Rob Ford.

"There are many dreams that are being fulfilled, I think simultaneously, tonight," said Davidson. "One of them being to be here in the first place, and meeting people like Paul Haggis and some of the judges and just some of the other luminaries here is a wonderful opportunity."

The Giller was established in 1994 by Rabinovitch in honour of his late wife, literary journalist Doris Giller.

It awards $50,000 annually to the author of the best Canadian novel or short story collection published in English and $5,000 to each of the finalists.

The Giller can also be a career maker, with the winner often seeing a huge spike in sales -- a boost often referred to as "the Giller effect."

Rabinovitch, who hatched the idea for the prize over bar drinks with the late author Mordecai Richler in Montreal, said the anniversary had him in a sentimental mood.

"I feel bad that some of the founders are not around to be with us. Mordecai is not around and Alice Munro is the new Nobel Prize laureate and she's not capable of travelling, otherwise she'd be here to join us."

Munro, a former Giller winner whose health is too poor to travel to Stockholm for the Nobel ceremony next month, was feted in a montage during the show.

She was also on the minds of many at the Giller party.

Moore said Munro was her inspiration when she was starting out crafting short stories while living in a "little attic room in a house of friends" in Toronto with her husband.

"Now when I look back, I think it was insane for a young woman to decide to do that, a risk. But I think it was because of Alice Munro that I felt like, 'This is something a woman can do in Canada, or a writer can do."'

Atwood, who recently tweeted a photo of herself toasting Munro's win with her in a hotel room in Victoria, B.C., said the short story great is "feeling quite pepped up" about the honour.

CBC radio host Jian Ghomeshi presided over the Giller bash, which was broadcast on CBC-TV and featured a performance from folk duo Whitehorse.

Last year's winner was Calgary's Will Ferguson for his novel "419."