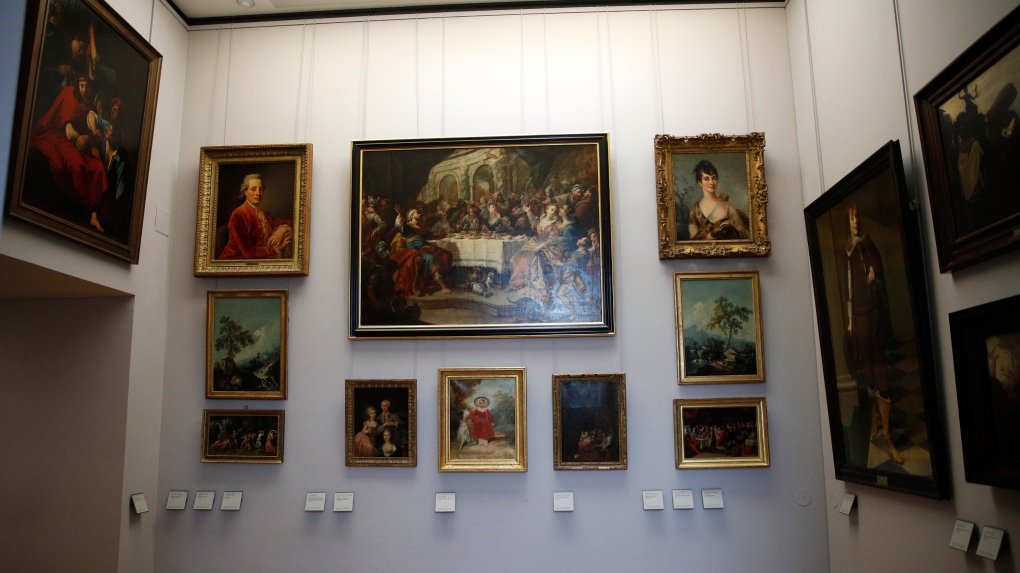 Paintings looted by Nazis during the Second World War, are on display at the Louvre museum, in Paris, Tuesday, Jan. 30, 2018. (AP Photo/Christophe Ena)

PARIS -- The Louvre Museum is putting 31 paintings on permanent display in an effort to find the rightful owners of works of art looted by Nazis during the Second World War.

The Paris museum opened two showrooms last month to display the paintings, which are among thousands of works of art looted by German forces in France between 1940 and 1945.

More than 45,000 objects have been handed back to their rightful owners since the war, but more than 2,000 remain unclaimed, including 296 paintings stored at the Louvre.

"These paintings don't belong to us. Museums often looked like predators in the past, but our goal is to return them," Sebastien Allard, the head of the paintings department at the Louvre, told The Associated Press in an interview on Tuesday.

"The large majority of the retrieved artworks have been plundered from Jewish families during World War II. Heirs can see these artworks, declare that these artworks belong to them, and officially ask for their return."

The paintings in the new showrooms are from various artists of different eras and horizons, including a remarkable landscape from Theodore Rousseau, "La Source du Lizon."

Other more famous looted works had already been on display in the museum, but visitors did not necessarily know they had been stolen by the Nazis. In museums, pieces of art retrieved by the French authorities are identified with the label "MNR," French initials for National Museums Recovery.

"We needed to draw attention further to the matter and raise public awareness," said Allard. "We thought it was important to highlight the specific case of these works, which are not listed on our inventories."

The Louvre initiative is the latest effort by French authorities to find heirs of families who lost their artwork. A working group set up by the Culture Ministry is in charge of tracing back the origins of the art and identifying owners. But it's a long and laborious task: only some 50 pieces have been returned since 1951.

"People who come forward need, for instance, to establish the proof that the artwork belonged to their grandfather," Allard said. "They need to find old family pictures and payment slips, or gather testimonies. It can take years."

In addition to the display of art in several museums across the country, French authorities have also designed an MNR catalogue, which is available online and can help owners identify their items without travelling to the Louvre. The complete list is known under the name of Rose Valland, a French curator who risked her life keeping notes on all the art the Nazis stole during the war.