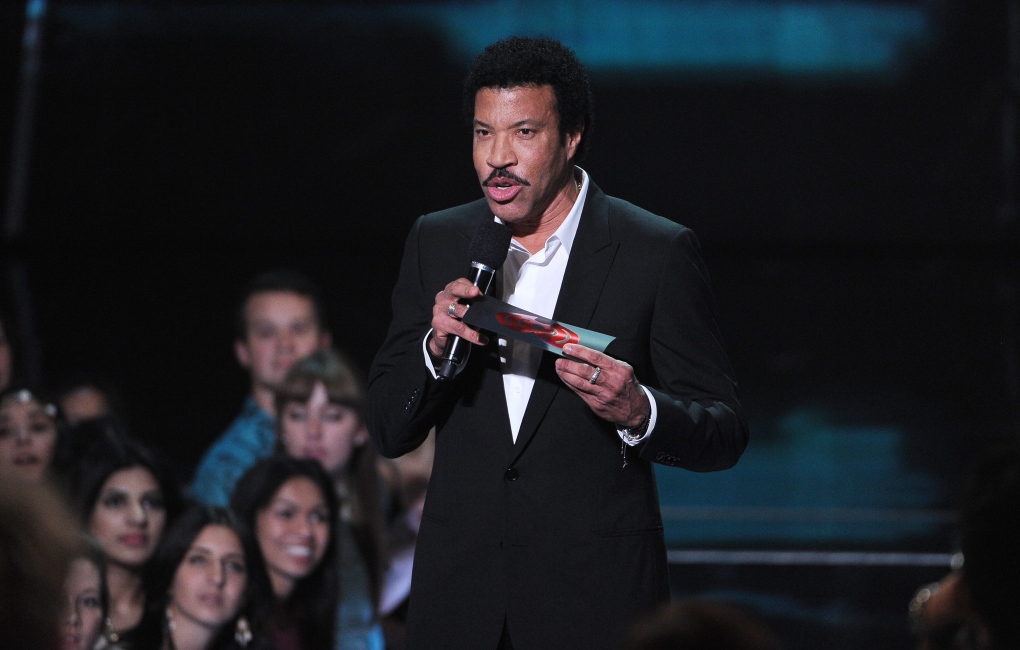 Lionel Richie speaks on stage at the iHeartRadio Music Awards at the Shrine Auditorium on Thursday, May 1, 2014, in Los Angeles. (Photo by Chris Pizzello/Invision/AP)

TORONTO -- Thirty years after "Hello" topped the chart, Lionel Richie can only marvel at how close he was to bidding the tune farewell.

The Alabama native was dizzy from the success of his self-titled 1982 record, his debut as a solo artist after birthing a decade of hits with the Commodores including "Brick House," "Easy" and "Three Times a Lady."

His longtime producer, James Anthony Carmichael, came over to his house for a songwriting session -- but just his physical presence was inspiration enough.

"As he turned the corner to come into the room, I turned to him and said: 'Hello, is it me you're looking for?"' a jovial Richie recalled in a recent telephone interview.

"I kept saying to him, 'You gotta be kidding me, right? I was just joking.' He said, 'No no, that's incredible. Give me a verse to that.' So I actually went in writing this song not liking the song, thinking that it was corny. 'I mean, this is REALLY corny. This is not going to do well.'

"Then by the time I finished the verse, I fell in love with the song again."

But Richie's "Hello" waffling wasn't yet through.

"Just to give you a true impression of what I thought about the song, here are the three songs I threw off the (1983) 'Can't Slow Down' album: 'Hello,' 'Running With the Night' and 'All Night Long.'

"It took somebody with some sense to tell me to put those back on. I'd lost my mind!"

Ultimately, "Can't Slow Down" gave Richie his first No. 1 album as a solo artist in many countries -- including Canada -- and went on to secure diamond certification here and the U.S.

And it's fortuitous that Richie ultimately warmed to the ballads, because he's spent three decades since recalling them for fevered fans.

The stylish 64-year-old will begin the next leg of his "All the Hits All Night Long" greatest-hits tour May 29 in Vancouver, with July stops scheduled for Toronto, Montreal and London, Ont.

This after an extensive North American trek last year and a thorough stint of globe-hopping earlier in 2014, a jaunt that saw Richie traipse across Australia and New Zealand in addition to seven Asian countries.

Though the five-time Grammy winner seems to possess a boundless energy -- he practically shouts his cheerful greeting down the line -- the travel can be a bit much for a grandfather of two (via his adopted daughter, Nicole Richie) who started his Motown career nearly a half-century ago.

"Someone asked me: 'Do you suffer from jet lag?' I said, 'I've been suffering from jet lag since '78.' I don't know what jet lag feels like anymore," he said with a boisterous laugh. "You walk around some days and go, 'I'm feeling dizzy.' (I'm) dizzy every day. Ears are ringing every day.

"We travel so much, I have to actually ask every night where are we, you follow me? Because even though I woke up in Amsterdam, the show is in England ... and the problem is I'm still thinking I'm in Amsterdam. So can you imagine walking on this stage: 'I'm in Denver!' 'No, it's Dallas, Lionel."'

"Three meals a day and (personal) space, not to mention eight hours of sleep, becomes ... a commodity after a while," he added. "I think that's the key to the whole thing."

When he wanes, however, he has the audience to lift him.

Packed as it is with hits as familiar as family, this tour is a "night of karaoke," he says. And though he's been associated with slow-burn ballads since his time crooning and blowing a sax with the Commodores, he insists the set is surprisingly high energy.

"The loudest songs of the night are the slowest songs," he said. "You would think ... it's going to be boring, but no, it's a singalong. 'Three Times a Lady' is the loudest song. 'Hello' -- forget about it. 'Hello,' they can't wait to sing that song with me. 'Say You Say Me' becomes an anthem."

Somewhat miraculously, Richie took "Endless Love," "Truly," "All Night Long (All Night)," "Hello" and "Say You Say Me" all to No. 1 over a furious four-year period in the early '80s.

All of those songs were Richie compositions. Looking back, he says he was fuelled by competition.

"We had the Italian race car (drivers') theory, which is: what's behind me doesn't count," he said. "What I always learned in my business was you could be ice cold with a No. 1 record. ... As soon as they hear 'All Night Long,' the first thing they'll say is: 'Oh my God, he can't do that again.' So you have to have the next record ready.

"Look who's breathing over your shoulders," he added. "You've got the Bee Gees on one side, you've got Prince and Michael (Jackson). Come on. You've got every major rock band in the world. It's not like we were starving for talent at that time. We really had to produce, 'cause the airwaves were full of creative people."

Of course, Richie -- who returned to the top of the charts in 2012 with "Tuskegee," which reworked his classic tunes in a country framework -- knows some serendipity was mixed with that sweat.

After nearly excluding "Hello" from "Can't Slow Down," he then threatened to meddle with the song's video.

That clip ultimately cast the smooth singer as an art professor pining after a fetching blind student. The teacher believes he's yearning in vain until he realizes the sculpture his pupil is worrying over is a portrait of his face.

The video, with 33.5 million views on YouTube, became one of the most beloved of its era. And Richie almost lost the plot.

"I kept telling Bob Giraldi, who of course insisted on making the girl blind, I kept saying: 'Are you kidding me? This is a straightforward love song. What are you talking about?"' he recalled, laughing.

Richie can't stop laughing as he remembers the incident.

"That's my 'Hello' video, yet again not realizing that she was blind and the fact that the whole scene -- it played out around the world. The whole world saw that video, I must tell you.

"Still to this day, people stop and talk to me about it."