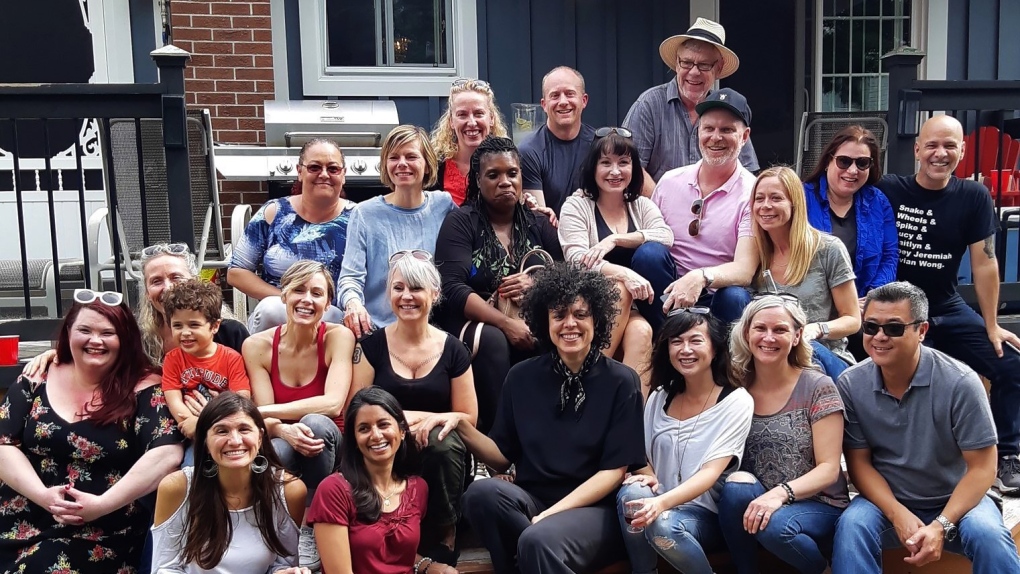 TORONTO -- For "Degrassi" star Stacie Mistysyn, series co-creator Christopher (Kit) Hood was like another parent in some ways.

When Mistysyn performed in "Cabaret" in high school, Hood was there to support her, along with fellow "Degrassi" co-creator Linda Schuyler.

And when Mistysyn needed advice on whether she should do a certain film in her post-"Degrassi" days, Hood was there to help.

Mistysyn, who was on several incarnations of "Degrassi," is among those sharing memories of Hood after news of his death earlier this week in Nova Scotia.

"He was one of the few mentors I had growing up, and so I appreciated him taking the time for me," Mistysyn said Friday in a phone interview, noting that she and other cast members felt lucky to have reconnected with Hood in recent years after not seeing him for a long time.

"He was kind of like a second dad in a way, but one that you feel kind of estranged from."

An obituary on the website of the Cole Harbour Funeral Home and Crematorium in Nova Scotia says Hood died suddenly at his home in West Lawrencetown, N.S., on Monday.

Born in England, Hood emigrated to Canada in his mid-20s and made a career as a writer, director, editor and producer.

In 1976, he and Schuyler, a former teacher, founded the Toronto-based Playing With Time Inc., which produced the Canadian TV series "The Kids of Degrassi Street," "Degrassi Junior High" and "Degrassi High."

The series became cult sensations with their look at the fictional lives of youth in downtown Toronto, from the light-hearted antics to the deeper issues that weren't featured in many other youth-focused programs.

In a statement, Schuyler said Hood had a "trademark impish charm, and a kid's-eye view" and never let "the camera look down on" their young protagonists.

"Kit's intimate and respectful style of directing, small of scale and richly layered, was integral to the success of the series through 'Degrassi Junior High' and 'Degrassi High,"' Schuyler said.

"To this day, his style is deeply imbedded in 'Degrassi's DNA. My love and support goes to his whole family. Kit's devotion to his family was always steadfast and strong."

"The Kids of Degrassi Street," which ran from 1979 to 1986 and aired on CBC TV, won an International Emmy Award.

"Degrassi Junior High," which ran from '87 to '89 on CBC and also won an International Emmy, was heralded for portraying the complex issues facing teens -- from teen pregnancy to shoplifting and relationships.

And "Degrassi High," which ran from '89 to '91, also tackled heavy topics including abortion and suicide.

Other titles in the franchise include "Degrassi: Next Class," the documentary series "Degrassi Talks" and the made-for-TV movie "School's Out!"

"Growing up on the show, he was someone I felt I could trust," said Mistysyn, who was on "The Kids of Degrassi Street" as a character named Lisa and then played Caitlin Ryan on "Degrassi Junior High," "Degrassi High" and "Degrassi: The Next Generation."

"He was good with us. We felt that he was a fun person who you just feel comfortable with, and obviously that's very important, especially when you're a kid who's not used to being in front of the camera."

Mistysyn said she and other cast members lost touch with Hood for a while after he left the franchise but eventually saw him again at gatherings including Degrassi Palooza last summer. She was happy to see he was living a peaceful and quiet life in Nova Scotia, where he had a bee colony on his property and made his own honey.

"It was just really nice that he wanted to be a part of my life after all these years," she said.

"I think he felt that people didn't necessarily associate him with the legacy of 'Degrassi' anymore, because he sold the rights to Linda Schuyler, so I think it was really good for him to have fans tell him how much they appreciated him being a part of it since he founded the original show."

Hood's obituary says while he stepped away from professional video production in his later years, he would still film things that caught his interest. It says he loved the ocean and nature, and spent the last two decades of his life living on Nova Scotia's Atlantic coast.

"He also shared this love with his two daughters, Georgia and Fenella, and his grandson, Sylvester," says the obituary.

"He is survived by his wife Agnes Malouf and her daughter July, and his sister Nicola and her husband and two sons in Australia."

Schuyler noted that Hood was attracted to character-rich dramas with their naturalistic and intimate style.

His "contribution to Degrassi has been invaluable and enduring," she said.

"Kit's quick wit, easy charm and 'no b.s.' attitude will be greatly missed."