Kids in the Hall featured in new book, eager to tackle 'turbulent time' with comedy 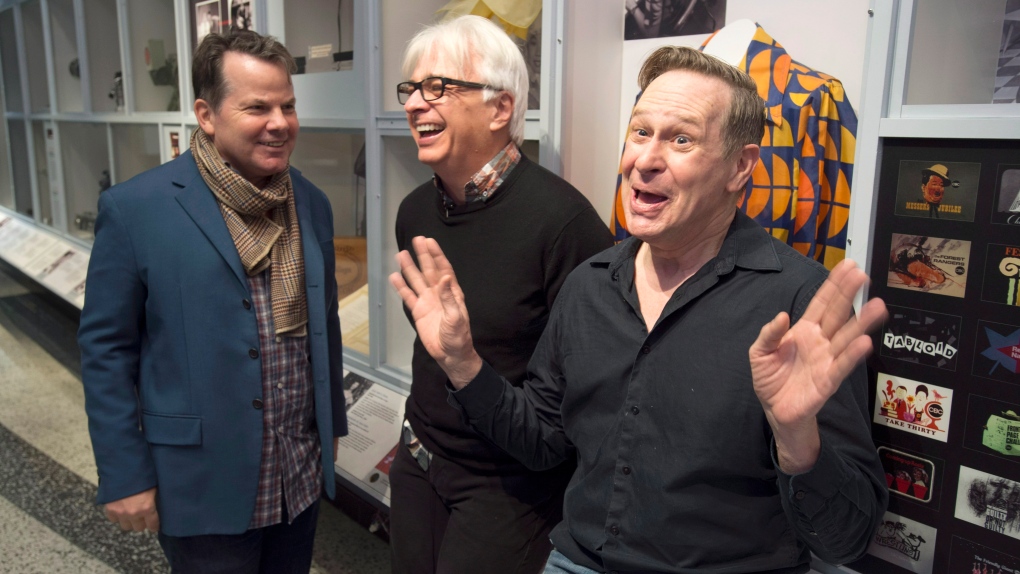 Paul Myers (centre) and Kids in the Hall comedians Scott Thompson (right) and Bruce McCulloch (left) chat about the book "The Kids in the Hall: One Dumb Guy." in Toronto on Monday, October 29, 2018. THE CANADIAN PRESS/Frank Gunn

TORONTO -- As they celebrate the 30th anniversary of their groundbreaking TV show and a new book about their lives, the Kids in the Hall are hoping to reunite for another project.

"We always talk about it and I think the gravity is created enough now that we'll be doing something," troupe member Bruce McCulloch said in a recent interview, noting it could be a tour or a TV project.

On shelves now, "The Kids in the Hall: One Dumb Guy" is by Canadian writer/musician Paul Myers, who is the brother of comedy star Mike Myers and has known the troupe since their early days.

It's the first authorized biography on the Canadian fivesome, who formed in 1984 and pushed the boundaries of comedy on the CBC and HBO.

But they're excited about the idea of creating new material at a time of heightened social awareness, political upheaval and a resurgence of sketch comedy on Canadian TV.

"I didn't understand how much the world was changing when we were young, and now the world has never changed more, so I think that would be interesting to comment on," said McCulloch.

"To me it's a very similar time to when we were in our heyday -- a very turbulent time, lots of social change, lots of political change, political correctness with a stranglehold on popular culture," added Thompson.

"I think what people are waiting for is five white guys in their 50s to tell people what's what. Right, people?" he added jokingly. "Isn't that what 2018 is waiting for?"

Seth Meyers wrote the foreword for the book, which has interviews with all members -- who also include Dave Foley, Kevin McDonald, and Mark McKinney -- as well as "Saturday Night Live" creator Lorne Michaels and other comedy giants.

The Kids' story has been documented in book form before, but "One Dumb Guy" dives deep into their origins, lives and careers. Myers wrote it over about two and a half years.

"It took a while. These guys are like herding cats, because they're five individuals doing five different careers," said Myers, who previously wrote "Barenaked Ladies: Public Stunts, Private Stories."

"When I finally got everyone on the same page, I got nothing but support from these guys."

The book details the Kids' childhoods. Several of them had fathers who were either addicted to alcohol or had anger issues, or both.

"As many people do in relationships, I think we completed our childhoods with each other and continue to now," said McCulloch, who was born in Edmonton.

"We come from complicated (backgrounds). I'm the son of an alcoholic, lots of us are. We've had damage and I think that made us funnier. But I think it's important. I'm proud."

Meanwhile, Thompson has endured several traumas, including a school shooting he witnessed as a teen in Brampton, Ont., and his battle with non-Hodgkin's lymphoma during filming for the miniseries "Death Comes to Town."

Thompson was also the mediator of sorts for the troupe when there was infighting between two camps: Foley/McDonald, who were the first members of the Kids in Toronto, and McKinney/McCulloch, who were in a troupe called the Audience in Calgary before joining the others.

Then there was the time Foley quit the troupe, resulting in tension between him and the rest of the members while shooting their film "Brain Candy."

"We've never been ashamed of our past or our lives," said Thompson. "We've always been pretty open, but now (the stories) are all collated, so it might look a little overwhelming when it's all put together."

These days, they've "never been closer," they insisted.

"There's no bad will between us. We're just disorganized. It's just really that," said McCulloch. "There was a hilarious email thread going around for a couple of years. Two years of like, 'When are we going to have a conference call?"'

Thompson said he thinks "it would be so much fun to get into trouble with these guys" again.

"That would be amazing," said Thompson. "Because the world is so different now. To play women today would be really fun."