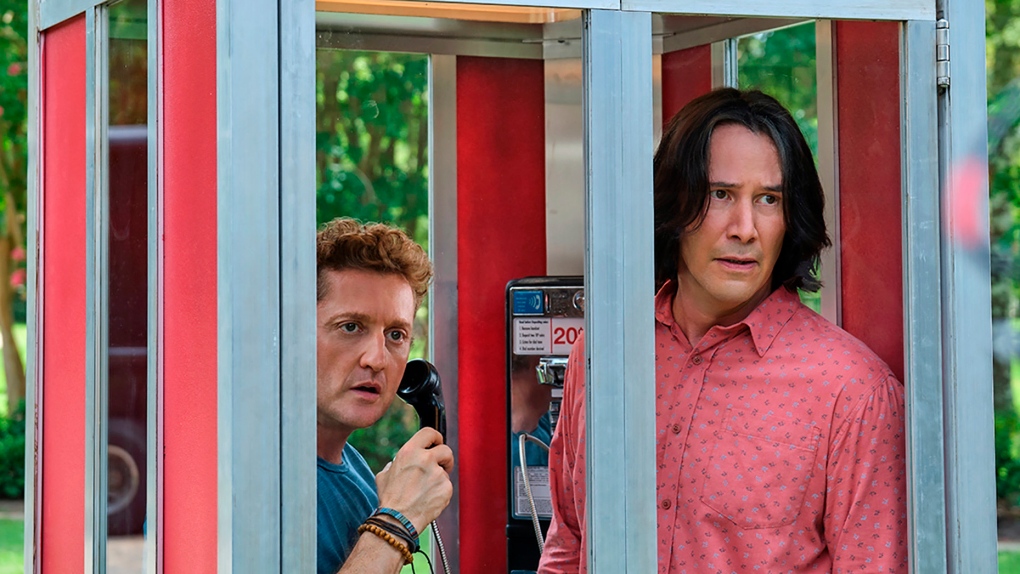 TORONTO -- If only Keanu Reeves and Alex Winter had a phone booth time machine like their “Bill & Ted” characters.

Perhaps then the stars of the buddy comedy franchise could have foreseen COVID-19 and the complications it would pose for the release of “Bill & Ted Face the Music.”

Opening in theatres and through on-demand platforms on Friday, the third instalment comes 10 years after its inception and several months into a pandemic that disrupted its debut date multiple times, as the team navigated cinema restrictions and other film releases.

“Cue confetti,” Toronto-raised Reeves said in a video conferencing interview with The Canadian Press, throwing his hands up in mock celebration of the film finally coming out.

“It's really exciting, and obviously it's being released in very challenging, extraordinary times. But we're grateful that it is able to be released and people are able to see it. We're proud of the film.”

Now middle-aged and married with kids, Wyld Stallyns rockers Bill (Winter) and Ted (Reeves) once again travel to the past and future, this time on a mission to save the universe with a song. Along the way, the sweet-natured slackers meet historical figures and various versions of themselves.

Brigette Lundy-Paine and Samara Weaving play the duo's daughters who also travel through time to help their dads create an epic tune that will unite the world and prevent catastrophe.

Other cast members include Jayma Mays and Erinn Hayes as Bill and Ted's wives, and Win Butler of Montreal-based indie rock band Arcade Fire as a member of the Great Leaders, who are led by Holland Taylor's character.

Winter said the past few months were “really stressful” trying to figure out how to get the film to audiences.

“It was not easy. I'm not going to sit here and be cavalier. From March until now has been a ride,” he said.

“We never could have anticipated such an incredibly challenging period for the entire planet, and we had been very much wanting to get the film out on schedule or as close to schedule as possible. The fans have been waiting for it for a really long time.”

Everyone involved “put a lot of effort to get the film out now, and to get it out safely so people had options for how they would see it,” he added.

“I feel very appreciative that they've made the film available VOD, which we felt very strongly about,” Winter said.

“But they also didn't completely turn their back on exhibition, and that's really important - that exhibition has the support from distribution and production. They shouldn't be left to just die during this pandemic.”

For all its delays, the new chapter seems somewhat timely, with a story about a need to save humanity mirroring a longing to save the world from COVID-19.

“We believed in the idea from the moment it was first pitched to us,” said Winter.

“We've all been friends a very long time and ... Keanu and I both found this very rich with potential. It made us laugh.”

The two said they've remained devoted to the project and the franchise for so long because the characters have been like totally excellent dudes by their sides all these years.

“Certainly in terms of comedy it's been pivotal,” said Reeves, who is filming “Matrix 4” in Berlin.

“It's like we have a companion. I have this companion - that when people meet the companion in the real world, they smile and they're like: 'Oh my God, Bill and Ted - excellent, party on! Strange things are afoot at the Circle K!”'

The two have a certain infectiousness, added Winter.

“To have a five-year-old come running up to you in the street and feeling like they know you and they're happy to see you - that's a pretty sweet thing.”

But does this close the chapter on Bill and Ted's “bogus journey” for Reeves and Winter?

“I don't know. This is a pretty final ending, this one,” said Winter.

Added Reeves: “Hopefully people enjoy the film and we'll take it from there.”

This report by The Canadian Press was first published Aug. 25, 2020.