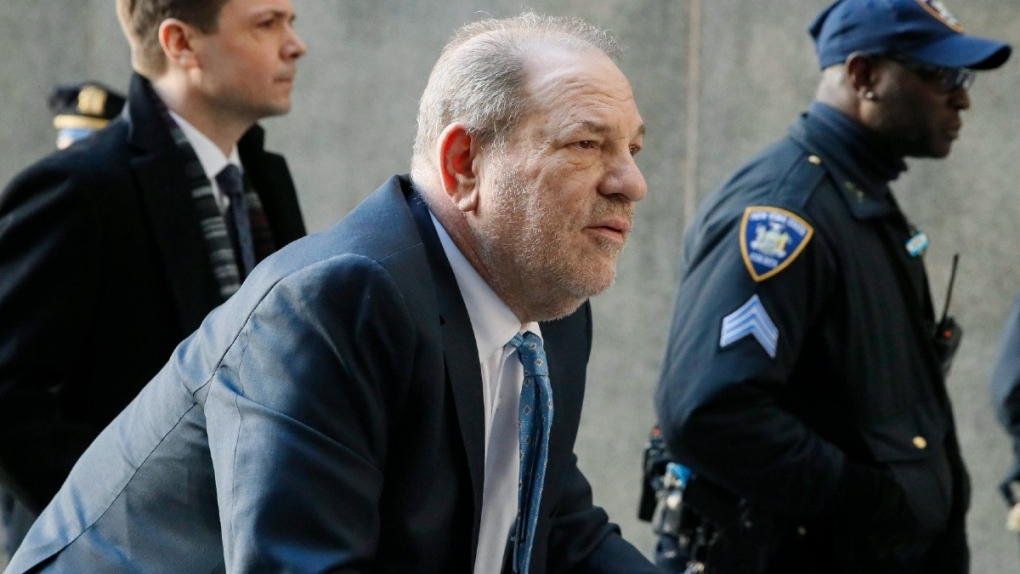 Harvey Weinstein arrives at a Manhattan courthouse for jury deliberations in his rape trial in New York, on Feb. 24, 2020. (John Minchillo / AP)

DOVER, DEL. -- A Delaware judge has approved a revised Weinstein Co. bankruptcy plan that provides about US$35 million for creditors, with roughly half that amount going to women who have accused disgraced film mogul Harvey Weinstein of sexual misconduct.

The judge approved the plan after a hearing Monday, overruling objections by attorneys representing producer Alexandra Canosa and actresses Wedil David and Dominique Huett, who have accused Weinstein of sexual assault, and a former Weinstein Co. employee who claims she was subjected to a hostile work environment.

The settlement amount is $11.5 million less than under a previous plan, which was scrapped after a federal judge in New York refused to approve a proposed $19 million settlement between Weinstein and some of his accusers. The settlement in that purported class-action lawsuit was a key component of the initial bankruptcy plan.

Holders of sexual misconduct claims will receive 100% of the liquidated value of their claims if they agree to release Weinstein from all legal claims. A claimant who elects not to release Weinstein but to retain the option to sue him in another court would receive 25% of the value of her bankruptcy claim.

According to court records, 55 sexual misconduct claims were filed in the bankruptcy case, with 39 holders of such claims voting in favour of the plan and eight voting against it. Among holders of general unsecured claims, 81, or 96%, voted for the plan.

Attorneys for the women objecting to the plan described it in a court filing last month as unfair and coercive.

"The point award system pits women against women competing for a limited recovery from the pathetically meagre sexual misconduct claims fund," they wrote.

Weinstein is serving a 23-year prison sentence after being convicted by a New York jury for the rape and sexual assault of two women.

Weinstein has also been charged in California with rape, forcible oral copulation, sexual battery by restraint and sexual penetration by use of force. Those allegations involve five women and stem from events in Los Angeles and Beverly Hills from 2004 to 2013.