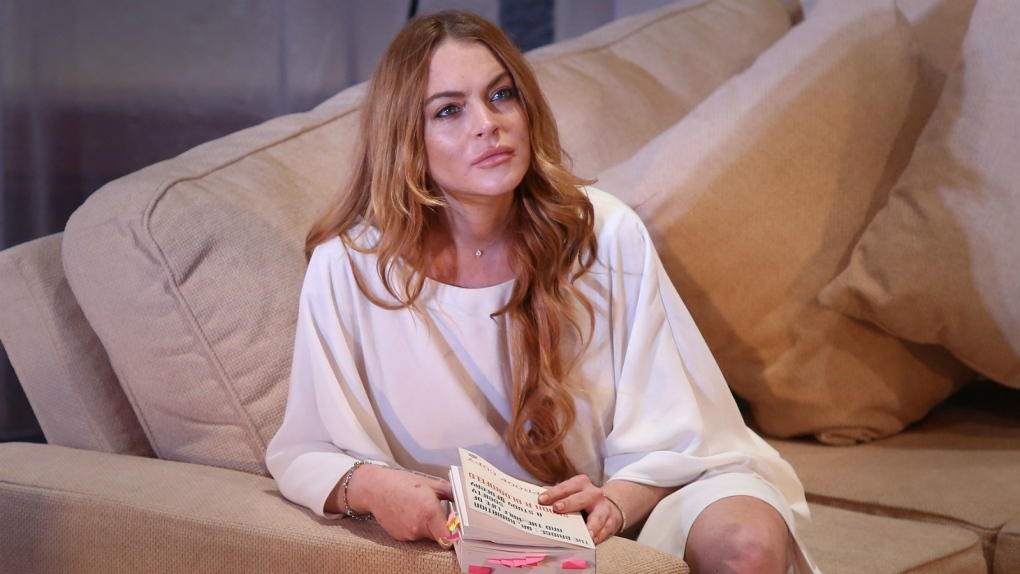 U.S actress Lindsay Lohan performs a scene from the play, "Speed the Plow," during a photocall at the Playhouse Theatre in central London on Sept. 30, 2014. (AP / Invision, Joel Ryan)

LOS ANGELES -- For the first time in nearly eight years, Lindsay Lohan is not on probation.

Los Angeles Superior Court Judge Mark Young on Thursday ended Lohan's probation in a reckless driving case, closing the last of a series of LA criminal cases that have dogged the actress for years.

Young said he reviewed community service logs and determined Lohan, 28, completed her sentence. He praised Lohan's attorney, Shawn Holley, telling her she did an excellent job getting the actress to complete the hours in recent weeks.

Unlike many previous proceedings in her criminal cases, Lohan was not present for the hearing. In a statement posted on Twitter, Lohan thanked Holley and the two New York groups where she did her recent flurry of service hours.

Resolving the reckless driving case was not without its hiccups -- Lohan missed a deadline last year to complete her community service, and a prosecutor criticized her efforts, noting she was given credit for meeting fans of a London stage play and other questionable activities. A judge earlier this year ordered Lohan to redo 125 hours of service.

Over the years, the actress was briefly jailed five times and sentenced to rehab for a variety of violations ranging from failing to perform her community service to skipping counselling sessions.

Since 2007, Lohan was convicted in three cases -- a drunken driving and drug case, a theft case filed over a stolen necklace, and a reckless driving case filed after the actress crashed her Porsche into a dump truck on Pacific Coast Highway while on her way to a movie shoot.

The drug and DUI case were resolved in 2012, 4 1/2 years after she was arrested twice in quick succession. Despite taking a plea deal that allowed her to avoid jail time, Lohan struggled to comply with the terms of her sentence and was ordered jailed after she missed a court appearance.

It took more than 50 court hearings to resolve the trio of cases, with the actress being forced to appear 20 times in person.

Lohan's court appearances had a tendency to become major spectacles, with deputies creating a red carpet-worthy line so photographers could document the starlet's entrances and exits to court. Commentators often critiqued Lohan's fashion and choice of hair colour, and someone even showered the actress in confetti as she walked into the Beverly Hills courthouse for one hearing.

Drama seemed to follow her into the courthouse. Her feuding parents were sometimes in attendance, and Lohan famously showed up to one hearing with an expletive painted on her fingernails. One of her attorneys told a judge the actress was "ensconced in the bosom" of a rehab facility when in reality Lohan only briefly checked in and was photographed shopping at an electronics store around the time of the hearing.

During her first stay at the Betty Ford Center, Lohan got into a fight with a rehab worker. No charges were filed.

In another instance, a judge summoned Lohan to court to explain that just because she was serving house arrest, house parties were not allowed.

The incidents did little to appease critics, who thought Lohan should be harshly punished for her inability to stay out of trouble. In reality, Los Angeles' overcrowded jail system ensured that Lohan's stints behind bars were brief.

They also did nothing to help Lohan's career, which was essentially put on hold while she struggled to resolve her DUI case. The actress missed the premiere and promotional opportunities for the film "Machete" in 2010 because of jail and rehab sentences.

A pair of roles in the Elizabeth Taylor biopic "Liz and Dick" and the film "The Canyons" failed to revive the once-promising actress' career. Her performances in both films were panned, and her recent appearance in a London production of "Speed-the-Plow" drew mixed reviews.

Asked whether Lohan would return to acting now that her court troubles were resolved, Holley said emphatically, "Absolutely."