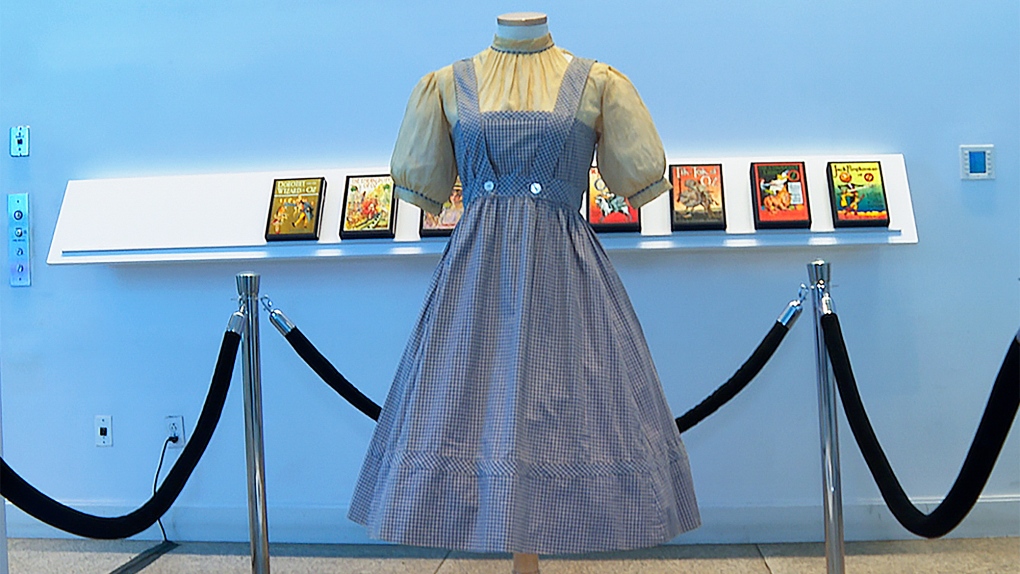 A judge has blocked the sale of a pinafore dress worn by Judy Garland in "The Wizard of Oz" -- just one day before it was expected to fetch up to US$1.2 million at auction.

Missing for decades but rediscovered in shoebox last year, the costume was withdrawn from a movie memorabilia sale in New York on Tuesday due to an ongoing ownership dispute.

The garment is one of several blue gingham dresses worn by Garland's character Dorothy in the classic 1939 movie. According to court documents, actor Mercedes McCambridge gifted it to Reverend Gilbert Hartke, founder of The Catholic University of America's Department of Speech and Drama, in the early 1970s.

Considered lost after the priest's death in 1986, the dress was found in a shoebox by a university lecturer last summer. The school subsequently offered if for sale via auction house Bonhams, which had estimated bids between US$800,000 and US$1.2 million.

But the reverend's niece, Barbara Hartke, has since claimed that the costume was part of her uncle's estate, to which she is the rightful heir. In a complaint filed to a New York court earlier this month, she argued that McCambridge had given the dress to her uncle to thank him for "helping her battle alcohol and substance abuse," and that there was no evidence showing he had donated it to the school.

The Catholic University meanwhile claims that McCambridge had expected her gift to benefit its students. In court filings, the college also argued that, in becoming a priest of the Roman Catholic Church's Dominican Order, the reverend had vowed never to possess "temporal goods" -- and thus the garment could not be considered part of his estate.

Hartke's attorney, Anthony Scordo, said via email that the university is "not clear exactly what the vow consisted of" and that the late priest "always accepted and (had) personal gifts."

In a statement provided to CNN, the university stressed that the ruling was "preliminary" and that there was "overwhelming evidence" contradicting Hartke's ownership claim.

"Catholic University continues to be committed to its plan to use proceeds from a sale of the dress to endow a faculty position in the Rome School of Music, Drama and Art, which it believes is in line with Mercedes McCambridge's original intent and Father Gilbert Hartke's desire to support and grow the University's drama program," the statement read.

According to the auction catalog, the item appears in scenes set in the Wicked Witch of the West's castle. It was offered complete with the white blouse Garland wore beneath. Another of the gingham dresses worn by Garland in the movie sold for US$1.5 million in 2015.

Canada to upgrade Latvia battlegroup to a brigade, boost number of troops

Canada has signed an agreement to upgrade the 2,000-soldier battlegroup it leads in Latvia to a brigade, boosting the number of troops and pledging to lead it for at least the next five years.

DEVELOPING | Opioid manufacturer agrees to $150M settlement after class-action lawsuit led by B.C. asks for $60B

British Columbia says a proposed $150-million settlement with Purdue Pharma Canada has been reached for the recovery of health-care costs related to the sale and marketing of opioid-based pain medicines.