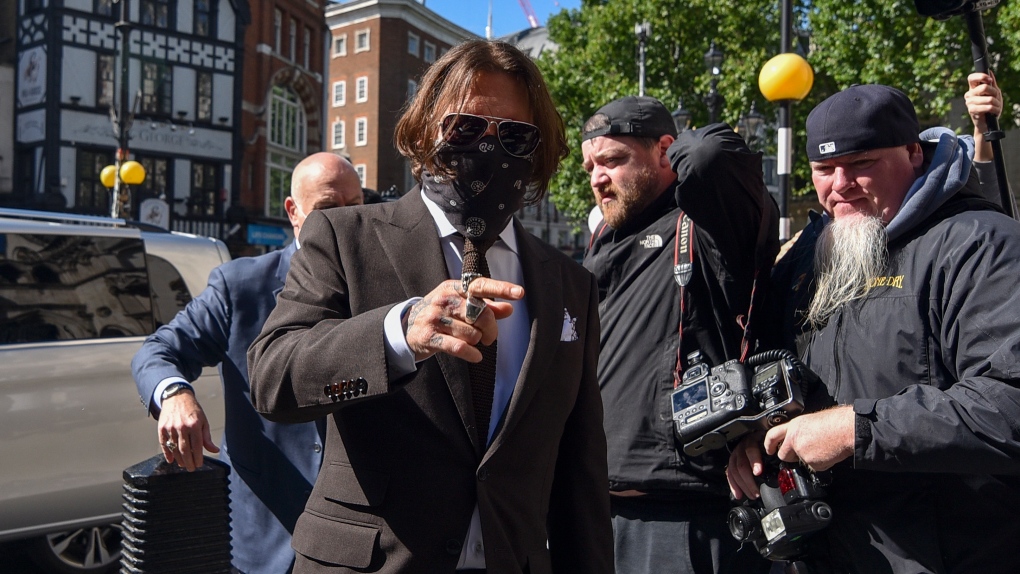 Johnny Depp arrives at the High Court in London, Friday July 10, 2020. Depp is back in the witness box at the trial of his libel suit against a tabloid newspaper that called him a 'wife-beater' in an April 2018 article that said he'd physically abused ex-wife Amber Heard. Depp strongly denies the allegations.(AP Photo/Alberto Pezzali)

LONDON -- Johnny Depp testified in a London court today that he was left embittered by ex-wife Amber Heard's claims he abused her, which turned him from "Cinderella to Quasimodo" in the public eye.

He also said the couple's tempestuous marriage broke down for good after an incident in which he accused Heard or one of her friends of defecating in the couple's bed.

He said he thought it was an oddly fitting end to the relationship.

Depp was concluding almost four days of evidence in his libel case against a British tabloid newspaper that accused him of physically abusing Heard.

The Hollywood star is suing News Group Newspapers, publisher of The Sun, and the paper's executive editor, Dan Wootton, over an April 2018 article that called him a "wife-beater."

In the High Court witness box, Depp has described a volatile relationship with Heard that descended into screaming matches which sometimes turned physical.

But he has strongly denied hitting Heard and accused her of compiling a dossier of fake claims against him as an "insurance policy."

Heard, a model and actress, filed for divorce the following year and obtained a restraining order against Depp on the grounds of domestic abuse.

The divorce was finalized in 2017.

The Sun's defence relies on a total of 14 allegations by Heard of Depp's violence between 2013 and 2016, in settings including his private island in the Bahamas, a rented house in Australia and a private jet.

He strongly denies all of them.