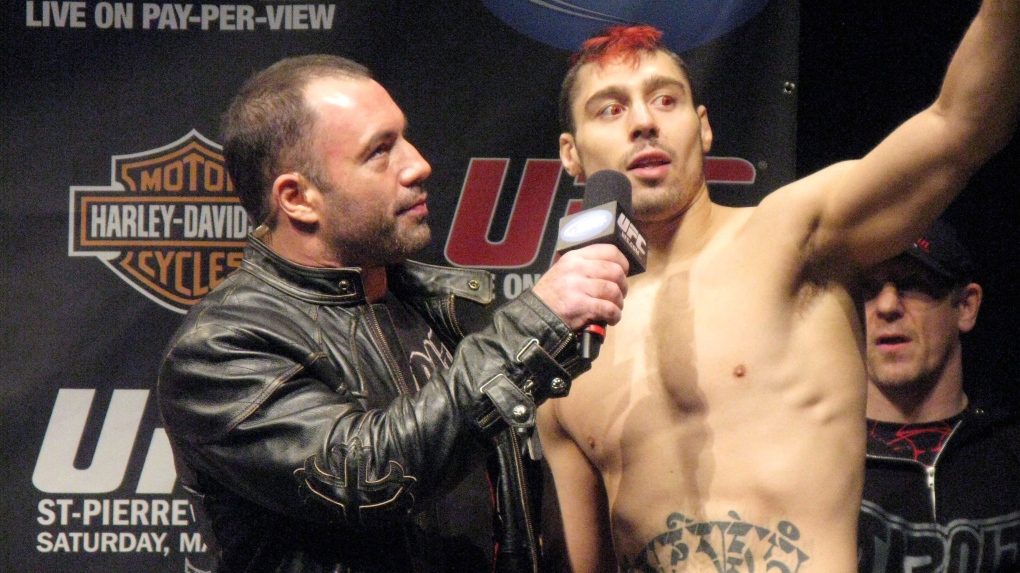 England's Dan (The Outlaw) Hardy is interviewed by Joe Rogan after making weight Friday March 26, 2010, at the Prudential Center in advance of his UFC 111 main event with Canadian welterweight champion Georges St-Pierre, in Newark, N.J. THE CANADIAN PRESS/ Neil Davidson

Joe Rogan, reportedly the highest paid podcast host in the world, has apologized for spreading misinformation to his millions of listeners about the West Coast fires during a recent episode.

Rogan made the comments during the latest episode of his podcast, "The Joe Rogan Experience," which featured Murray, author of "The Madness of Crowds," and was released on Thursday.

"The Joe Rogan Experience," which was added to Spotify on September 1 and will become an exclusive later this year, is one of the most popular podcasts in the United States. Rogan, a comedian who built his brand around no-holds-barred interviews with some controversial guests, topped Forbes' 2020 list of the highest-earning podcasters.

"There is a madness going on there," Rogan said during the Thursday episode. "You want to talk about madness of crowds. That exemplifies that right now. They have arrested people for lighting forest fires up there. They have arrested left-wing people for lighting these forest fires. You know, air quote, activist, and this is also something that is not widely being reported."

As CNN's Brianna Keilar said on CNN Newsroom Friday, that topic is not being widely reported because it is "not true."

"What has been reported is that there are local and state officials all through the region who have been coming out and refuting these conspiracy theories," she added.

Indeed, the FBI on September 11 issued a statement saying that it "has investigated several such reports and found them to be untrue."

In his Instagram video on Friday, Rogan apologized to the listeners he may have misled.

"I'm sorry if I duped you as well," Rogan said. "There is nothing I can do about it now. It's out there, but it's definitely a mistake. My apologies. I will take this into consideration certainly when I say things in the future. It feels very irresponsible of me. I don't take it lightly. I'm very upset with myself, and I apologize to you as well. Sorry."

This is far from the first time Rogan has spurred controversy. Spotify CEO Daniel Ek addressed employee concerns on Wednesday about recent remarks Rogan made about transgender people, Motherboard reported.

"All content on Spotify is subject to our long-standing content guidelines. Our diverse team of experts reviewed the content in question and determined that it did not meet the criteria for removal from our platform," a Spotify spokesperson told Motherboard.

In May, Rogan signed a multi-year exclusive licensing deal with Spotify as the company tries to expand beyond a music streaming service. While Rogan's podcast was added to Spotify's service on September 1, the platform did not include previous episodes with conspiracy theorist Alex Jones or far-right commentator Gavin McInnes.

After the deal was announced, Rogan said in an Instagram post that Spotify "won't have any creative control over the show."