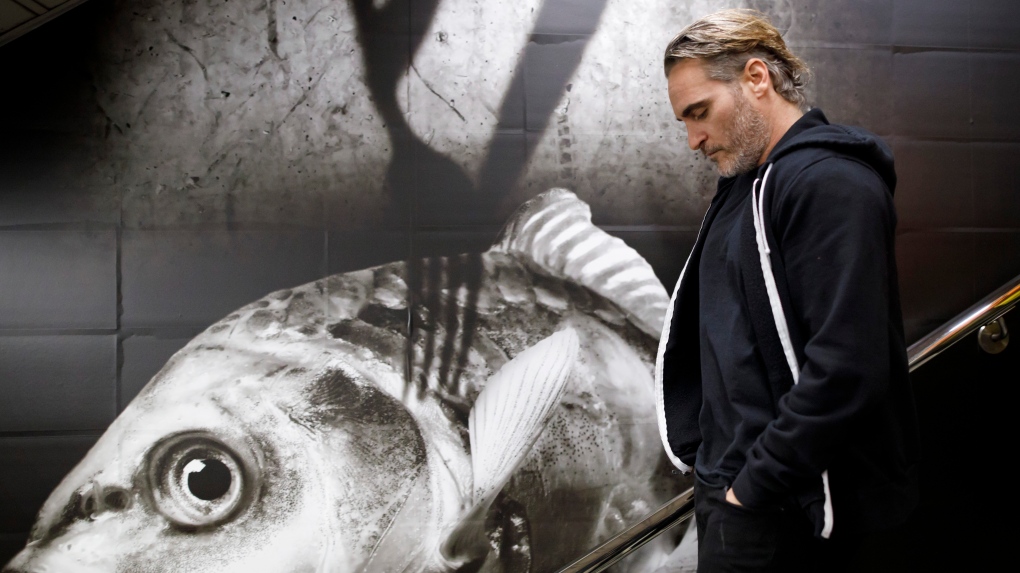 The movie star made the afternoon appearance just before rush hour to view an underground publicity campaign promoting veganism, but did not speak to onlookers or board a train.

Phoenix spent about five minutes wandering past transit riders to view black-and-white images of farmed animals. The wall murals are part of a campaign by the Colorado-based organization Be Fair Be Vegan.

Leading the tour was Anita Krajnc of the vegan advocacy group Toronto Pig Save.

She says she met Phoenix at a protest last summer at a Los Angeles slaughterhouse, when he gave her his contact information.

Phoenix is in Toronto to attend the Toronto International Film Festival, where he is promoting his new film "Joker." He was set to attend an awards gala just hours later to receive an acting prize.

About two dozen vegan supporters and media followed Phoenix as he toured St. George station on Monday, pausing occasionally to look at sad images of sheep, pigs, fish and other farmed animals.

Krajnc says the event was organized very quickly, noting she asked Phoenix on Sunday if he could make an appearance and he agreed that night.

"He's so busy, the only window he had was 3 to 5 p.m. today and he has this big award, yet he took time out to come see Be Fair Be Vegan Toronto because it's so close to his heart," said Krajnc.