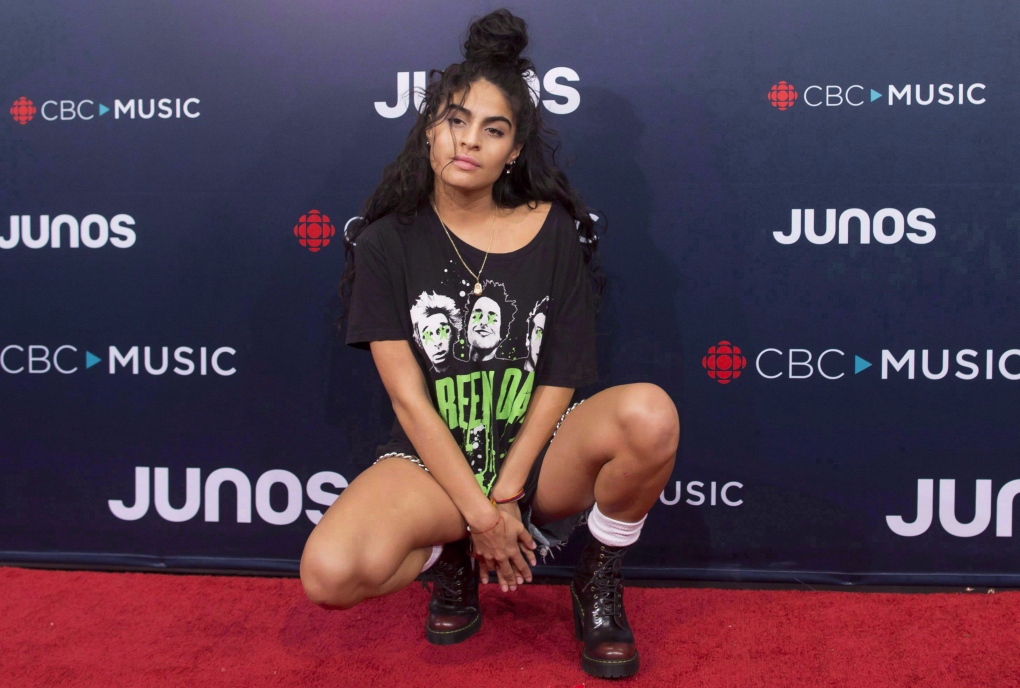 Jessie Reyez arrives on the red carpet at the Juno Awards in Vancouver, Sunday, March, 25, 2018. THE CANADIAN PRESS/Darryl Dyck

TORONTO -- Jessie Reyez built her reputation as a potent voice in Canada's music scene, and on Wednesday the Toronto-raised singer picked up her first Grammy nomination on a path to global career ambitions.

The 28-year-old singer-songwriter joins fellow homegrown acts Shawn Mendes and Drake as the marquee Canadian contenders at the 2020 Grammy Awards, a year that's dominated by American newcomers in the top categories, including Lizzo, Billie Eilish and Lil Nas X.

"I have no words," Reyez wrote Wednesday in an Instagram post accompanied by a video showing the groggy singer as her family wakes her up and breaks the news to her outside her hotel room door.

Reyez is already a familiar name on Canadian radio with her 2016 single "Figures," but it's last year's album "Being Human in Public" that grabbed the attention of Grammy voters, and a nod in the urban contemporary album category.

The seven-track release includes "Saint Nobody," a staple of her live shows for its chant-worthy hook, and "Body Count," which features R&B singer Kehlani and Fifth Harmony member Normani. It won the best R&B/soul recording at the Juno Awards earlier this year.

Over the summer, she contributed a song to Beyonce's soundtrack for "The Lion King."

Among the Canadian Grammy nominees, it's Drake who leads with two nods for separate collaborations with other performers. He's part of Chris Brown's "No Guidance," which is in the running for best R&B song. The Toronto rapper also shares a nod with Rick Ross on "Gold Roses" for best rap song. The track was co-produced by Drake's longtime Toronto-based collaborator Noah Shebib.

Mendes splits his nomination for "Senorita" with Camila Cabello in the best pop duo or group performance category.

Other returning nominees include Daniel Caesar whose collaboration with Brandy on "Love Again" earned them a nod in best R&B performance category. It's the Oshawa, Ont.-born artist's fourth career Grammy nomination.

Northern Cree is getting another opportunity to score its first golden statuette, a stunning 18 years after the Indigenous singing group was first nominated. Based in Alberta, the collective is chasing its ninth Grammy for "When It's Cold -- Cree Round Dance Songs" in the best regional roots music album.

Songwriter Bernie Herms is among the nominees for "Only Jesus," recorded by rock band Casting Crowns and contending in the best contemporary Christian music performance or song category. The London, Ont.-born musician, who spent his youth in Edmonton and Chilliwack, B.C., already has a Grammy to his name, and has worked with top-notch talent such as Kelly Clarkson, Josh Groban, the Tenors and Barbra Streisand.

And while Montreal electronic musician Marie Davidson didn't get a nomination herself, a pumped-up club version of her song "Work It" by Belgian brothers David and Stephen Dewaele, who perform under the name Soulwax, nabbed best remixed recording.

American songwriter and musician John Hill has a nod for nine songs, which include Carly Rae Jepsen's "No Drug Like Me" and "Too Much," while Ricky Reed is up for tracks that include "Power is Power," a song for a "Game of Thrones" album that features S.Z.A. and Toronto's the Weeknd.

The 62nd Grammy Awards will be hosted by Alicia Keys and air Jan. 26. on CBS and Citytv.

This story by The Canadian Press was first published on Nov. 20, 2019.