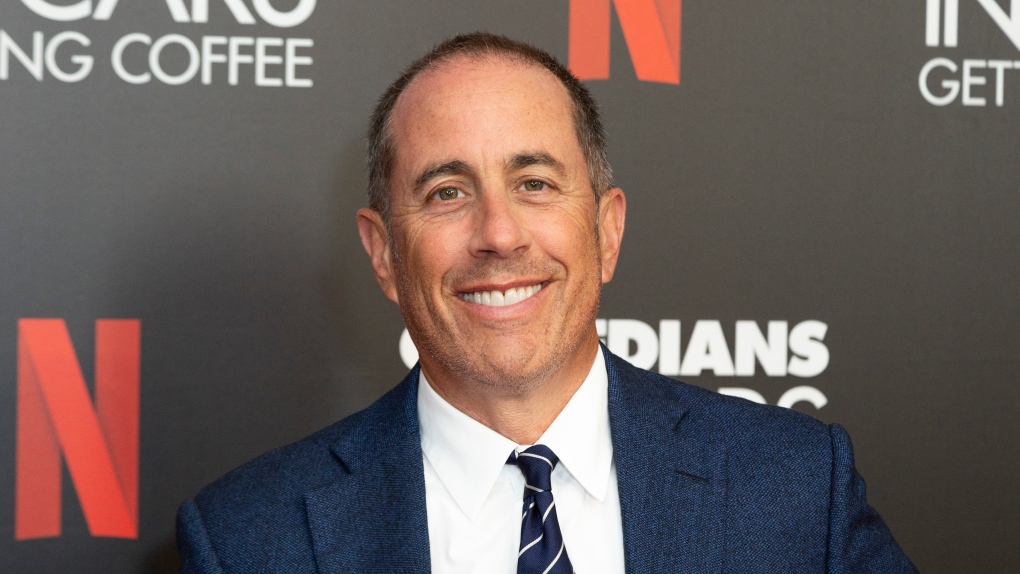 In this Wednesday, July 17, 2019, file photo Jerry Seinfeld attends the "Comedians In Cars Getting Coffee," photo call at The Paley Center for Media, in Beverly Hills, Calif. (Willy Sanjuan/Invision/AP, File)

LOS ANGELES -- Forget the high-performance sports cars, the luxury Rolls-Royces and all those other classic automobiles in which Jerry Seinfeld ushers his fellow comics to the diner on television's "Comedians in Cars Getting Coffee."

The most valuable things Seinfeld owns are the thousands of pieces of paper -- yellow, scribbled over, sometimes crumpled -- that for years he's been cramming into those brown accordion folders that were once a staple of storage until something better came along called the laptop computer.

They contain the jokes Seinfeld has been writing and telling since that first day he walked into a New York nightclub as a 21-year-old wannabe comic who accepted free hamburgers in lieu of a paycheque. They continue right up to the present-day musings of a 66-year-old man wondering how the world keeps getting more crowded when he doesn't see any more cemeteries being built.

"Flights, restaurants, theatre shows sell out all the time. Cemetery? Anyone croaks, send them in. We just had an opening. What happened? Somebody came back to life and walked out. You're very lucky."

He's compiled them all in a new book, "Is This Anything?," the title taken from the question every comic asks every other comic when he or she is about to try out new material.

Assembled in chronological order, they provide not just a trove of laugh-out-loud one-liners but also a timeline, beginning with a kid commuting from his parents' home on Long Island to New York City to try to make strangers laugh. It continues through a career during which Seinfeld became arguably the greatest stand-up comic of his era and the pivotal figure of the funniest TV sitcom of its time.

Still, why did he save every joke of his career? Or at least every one that got a laugh?

"A lot of people ask me that question and I always say I don't know why I saved anything else," he replies with a chuckle in a phone interview. Then he adds more seriously, "This is the most valuable thing I have."

Hunkered down in the family home with his wife and their three children in East Hampton, New York, he is continuing to add to those folders. He's also working on another project that for the moment he isn't discussing except to say it involves the people with whom he made the hit 2007 animated comedy film "Bee Movie."

Even quarantined from the coronavirus, Seinfeld says he finds no shortage of new material.

"A lot of material just comes out of being constantly irritated by something else, and that seems to go on endlessly," he says, especially when staying home with four other people.

Still, unlike his bachelor days in Manhattan, being a family man puts a limit on just how much irritation he can vent.

"When I lived alone when I was single, I would fill up an entire house with complaints, but now I have to share it," he jokes. "I'm on a complaint diet."

When the pandemic finally ends, he's looking forward to going back out on the road, rescheduling the stand-up gigs he had to cancel. But don't look for him to fill them with coronavirus jokes, although several good ones fill the last chapter of "Is This Anything?"

"I think people are going to be so sick of it that they're going to move on and want us to talk about other things," he says of that and politics, although he admits he's been consumed by both during the months stuck at home.

Still, he's never been much for political jokes, saying that, one, he's not good at them and two, they don't hold up over time.

"It's like politics ages and spoils very quickly," he continues. "But a great piece of stand-up can live a long life."

One other thing he'll be doing is heading back to his second home in his beloved Manhattan and dropping by the diners and comedy clubs again.

"Funny thing is," he continues, during the TV series "I never went to diners, really, and had coffee in those days. And now I do. I'm living the life of the character on the show."