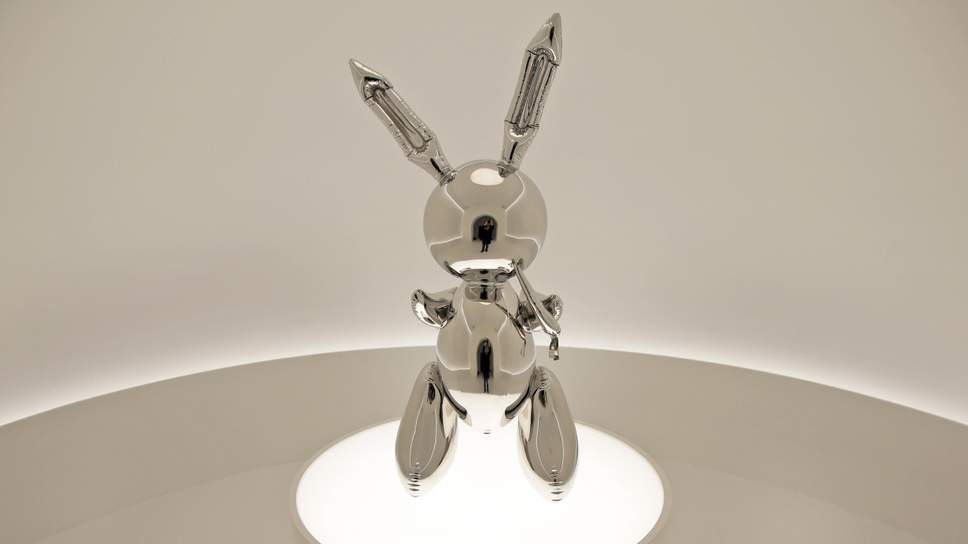 'Rabbit' by Jeff Koons has become the world's most expensive piece of work sold by a living artist sold at auction. (AP photo)

A sculpture by American artist Jeff Koons sold on Wednesday for $91.1 million at an auction organized by Christie's in New York -- a record price for a living artist.

"Rabbit", a stainless steel casting of an inflatable rabbit, was the star of the auction house's spring sale and overtook the previous record set by British painter David Hockney's "Portrait of an Artist (Pool with Two Figures)", which sold last November at Christie's for $90.3 million.

It was a return to the top for Koons, 64, whose "Balloon Dog (Orange)" for five years held the record for highest price reached at auction for a living artist after its 2013 sale for $58.4 million.

The selling price of "Rabbit" was only $80 million, but once commissions and fees were added, the final total rose to $91.075 million.

In an unusual turn for an art auction at this price range, the buyer of "Rabbit" was actually in the room during the sale.

Wednesday's milestone came two years after Christie's in New York set the record for most expensive work of art known to have been sold with the sale of Leonardo de Vinci's "Salvator Mundi" for $450 million.

Created by Koons in 1986, "Rabbit" is among the best-known works by the artist, who built a reputation for challenging art world conventions.

He has exhibited his larger-than-life creations worldwide, including a 2008 showing in France's historic Chateau of Versailles that so jarred French traditionalists a small group of them protested outside the event, demanding Koons's works be sent to "Disneyland".

At 41 inches (1.04 metres) in height, "Rabbit" was auctioned from the collection of deceased publishing mogul S.I. Newhouse.

Before his death in 2017, his empire included Conde Nast, which published magazines like Vogue, The New Yorker and Vanity Fair.

Alexander Rotter, chairman of post-war and contemporary art at Christie's, told AFP after the auction "Rabbit" is "the most important piece by Jeff Koons and I want to go even a step further and say the most important sculpture of second half of the 20th century."

"It's the end of sculpture. It's the anti-David as I call it," he said, referring to Michelangelo's masterpiece. "You can't go any further away from David still being figurative and a traditional sculpture."

The sale was a new triumph for the controversial artist, who since his emergence in the 1980s has been the subject of endless conversation over his work's commercial and artistic value.

He's raised eyebrows throughout his career, particularly with paintings and sculptures depicting him having sex with Italian film star Cicciolina, to whom he was married between 1991 and 1994.

Arriving in New York in 1976, Koon has built up a studio that at its height in 2015 employed more than 100 artisans tasked with meeting his exacting standards.