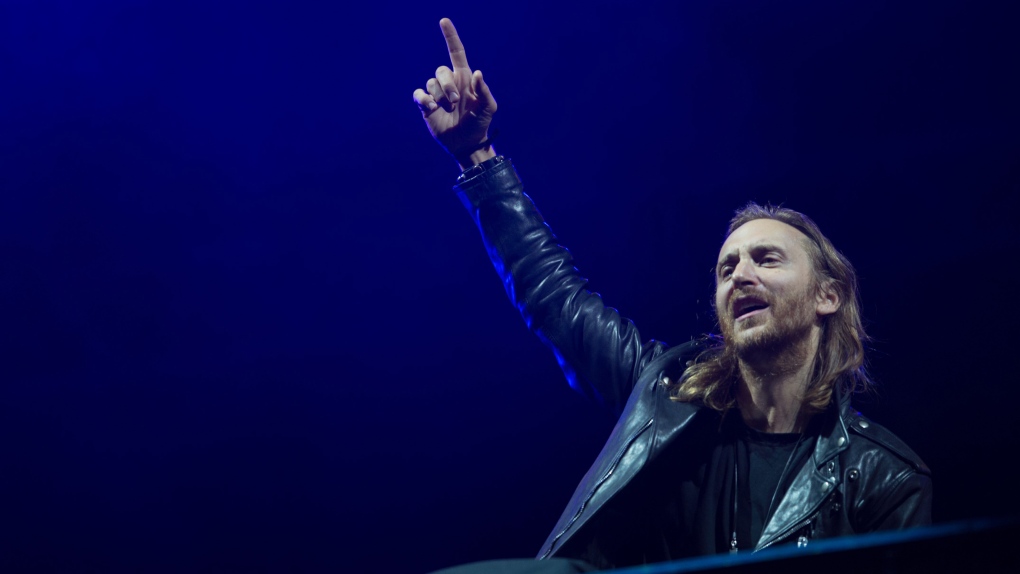 David Guetta's theme for the UEFA Euro 2016 soccer championship, 'This One's For You,' was released May 13. (AFP PHOTO / YASUYOSHI CHIBA)

NEW YORK -- When hundreds of artists started singing from their living rooms when the coronavirus pandemic hit, Grammy-winning DJ-producer David Guetta still wanted to perform in front of a live audience.

So the hitmaker set up shop in front of a 205-foot pool at the Icon Brickell in downtown Miami, performing for 90 minutes as 8,000 locals danced along from their balconies during the feel-good moment last month.

Now, he's launching his second United At Home event at an undisclosed location in New York on Saturday to connect with fans and raise money for health care workers and virus relief efforts.

"A lot of artists, especially DJs, were doing performances from their bedrooms. I felt like that was a little bit frustrating. I really wanted to feel like I have a crowd," Guetta said in an interview with The Associated Press this week. "So, I had the idea of doing this in the middle of towers and people were on the balconies and that was absolutely amazing."

His first concert featured fans dancing away -- some taking their shirts off and basking in the moment -- while others enjoyed the vibe from their homes, which Guetta could watch via Zoom as he performed his electronic dance hits that have made him a chart-topping touring juggernaut in the last decade. Police said they dispersed crowds violating social distancing guidelines during the rooftop performance, but no arrests were made when officers had to break up groups on the sidewalks far below the concert.

"To me it's essential," Guetta said of connecting directly with his fans. "That was the idea behind the show. I'm going to do it in a different way in New York City, but we were also interacting with people on Zoom. I thought that was so cool. I could see the kids dancing at home. I could see everybody having their own little parties. I could interact with them. Some people would write messages to me and I would answer them. Like, this is really cool! It feels more real. We're entertainers, this is what we do. It's not just like playing at home on the keyboard. I'm performing for the people. It's amazing to receive energy back."

The first United At Home concert raised $750,000, including a $300K contribution from Guetta. This week's event will air live at 7 p.m. EDT -- the time of Manhattan's ritual of clapping and cheering for a few minutes to honour all essential workers -- from Guetta's social media pages, including Facebook, Twitter, TikTok, Instagram and YouTube. Fans can select if they want to donate to the Mayor's Fund to Advance New York City, Feeding America, the World Health Organization or Fondation Hopitaux de Paris-Hopitaux de France.

"It's cool that people can choose where they want to donate, but in any case, it's helping people with coronavirus and those on the front lines. We're doing something good. And also, we're bringing a little bit of happiness in people's life which is what I'm trying to do as a DJ."

Guetta, who is French, has had white-hot success in the U.S. and around the world with popular songs like "When Love Takes Over" with Kelly Rowland, "I Gotta Feeling" with the Black Eyed Peas, "Titanium" with Sia and other Top 10 hits. He called dealing with the virus "very scary" because he hasn't been able to tour the world and perform like he's used to.

"I don't think I'm going to work before 2021 so of course it's a problem," the 52-year-old said. "I'm lucky enough that I have money on the side and I don't have to worry about if I can eat next month. But some of the people, they're not in the same situation and that's why I'm trying to do something to help."

One good thing to come out of the pandemic is free time to write and produce music, he said.

"Oh my God you, have no idea. It's been one of the most incredibly productive times I've had since 10 years," he said. "It really made me think about the way I live my life. Of course, taking a plane every day, constantly doing interviews, organizing, having meetings, it becomes, I don't know, it's almost like the business side takes over."

"The ability for me to just focus on my music and not do anything else at all -- I became so much more creative," he said. "It's incredible. A lot of great music is coming very soon."