Heard told jurors on Thursday that the harassment she received on social media during the trial left her humiliated, calling the experience "agonizing." Heard added that she is scared for her life after receiving multiple death threats.

"The harassment and the humiliation, the campaign against me that's echoed every single day on social media, and now in front of cameras in the showroom -- every single day I have to relive the trauma," Heard said in court as she fought back tears. "Perhaps it's easy to forget I'm a human being."

"And even though Johnny promised that I deserved this and promised he’d do this, I don't deserve this," she continued.

Depp is suing Heard in Virginia's Fairfax County Circuit Court over a December 2018 op-ed she wrote in The Washington Post describing herself as "a public figure representing domestic abuse." His lawyers say he was defamed by the article even though it never mentioned his name.

Heard took the stand earlier this month and testified about her marriage to Depp, detailing years of alleged physical and sexual abuse in graphic detail. Yet the sentiment on social media in response is that she's lying, despite false allegations of domestic violence being extremely rare.

On social media and at the courthouse, Depp's fans have overtaken the trial's narrative, lining up overnight to get a spot in the courtroom and show signs of support. In contrast, Heard has been booed by those outside the courthouse as she enters and leaves. 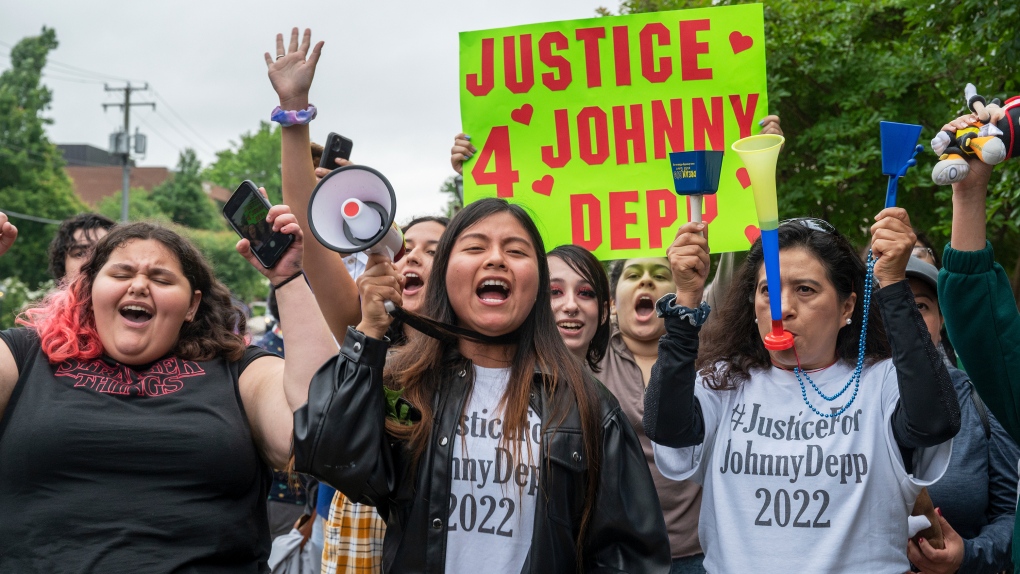 Supporters of actor Johnny Depp rally outside of Fairfax County Courthouse as a jury is scheduled to hear closing arguments in Johnny Depp's high-profile libel lawsuit against ex-wife Amber Heard in Fairfax, Va., on Friday, May 27, 2022.(AP Photo/Craig Hudson)

Alyssa Bach, associate lawyer at Shulman & Partners LLP in Toronto, previously told CTVNews.ca that having the trial livestreamed nearly every weekday for the past six weeks has let the public critically assess not only Depp and Heard and their respective claims, but alleged victims of abuse in general and their credibility.

"What we're seeing when we look at Johnny Depp and Amber Heard is that instead of just having, say, a judge and a jury, you now have this whole public perception that's looking at it and saying, 'Well, this is how I think and … therefore this is the person who I am choosing to believe,' but there's so many complexities that come into play that really not everybody's going to understand," Bach said.

Bach says the reaction to Heard's testimony online amplifies the concerns of alleged victims when debating whether to take claims of abuse to court, even though the average person's trial would not be broadcast around the world.

"Even if they're not going to be in such a public forum, knowing that there's this kind of high burden on them and this harsh scrutiny on what they're trying to put forward, it's really highlighting the difficulties that people can go through in raising these claims in any format," she said.

However, Bach said it is important to remember that, despite the public scrutiny, the verdict ultimately comes down to a judge or jury, depending on the trial and its location.

During Heard's testimony on Thursday, spectators in the courtroom reacted audibly, prompting the judge to warn that she would clear the gallery if further remarks were made.

On social media, images, video clips and memes of the trial have saturated people's newsfeeds.

Imagery of Heard blowing her nose during testimony have prompted accusations on TikTok that she snorted cocaine on the stand. Footage of Depp adjusting a cable near his attorney, Camille Vasquez, is replayed on the platform in slow motion, making the gesture seem chivalrous.

Heard details to jurors how Depp allegedly sexually assaulted her, and TikTokers film themselves over her words, reacting as if they would welcome such attention. That audio has since been removed from the platform.

People on social media have also taken to re-enacting Heard's testimony of Depp's alleged physical abuse towards her, as if to poke holes in her testimony. Even evidence supporting Heard's claims, such as a video she recorded of Depp pouring himself a "megapint" glass of wine and violently smashing glasses in their kitchen, have turned into jokes in favour of Depp. 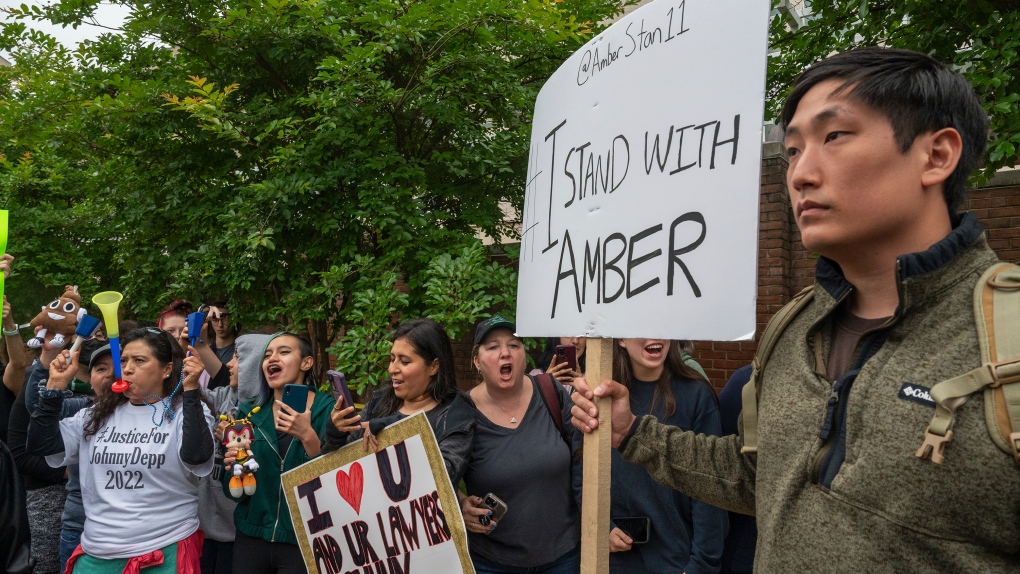 Dan Kim demonstrates in support of Amber Heard as supporters of actor Johnny Depp rally outside of Fairfax County Courthouse in Fairfax, Va., on Friday, May 27, 2022. (AP Photo/Craig Hudson)

Andrea Gunraj, vice president of public engagement at the Canadian Women's Foundation, told CTVNews.ca earlier this month that public engagement in "blaming narratives" amid the Depp-Heard trial are "even more visible and influential" due to social media.

"Being so visible in public to so many people, famous people can face a lot of public blaming, disbelief and abusive reactions when they say they were abused. Abusers who are famous can at the same time be excused for their behaviour because they’re admired on screen," she explained.

Gunraj said the "vitriolic reactions" on social media to Heard's testimony and her treatment "may very well discourage survivors from speaking out in their own lives." She says this is dangerous as it can prevent those who have been allegedly abused from getting the help they need.

"Conditions that make it difficult for people to come forward and be believed, that put them under fire for not being 'the right kind of victim,' are the same conditions that enable a culture of silencing, blame and belittling to flourish," she said.

If you are a victim of domestic violence, or have been affected by domestic abuse and need help, support and resources can be found here.