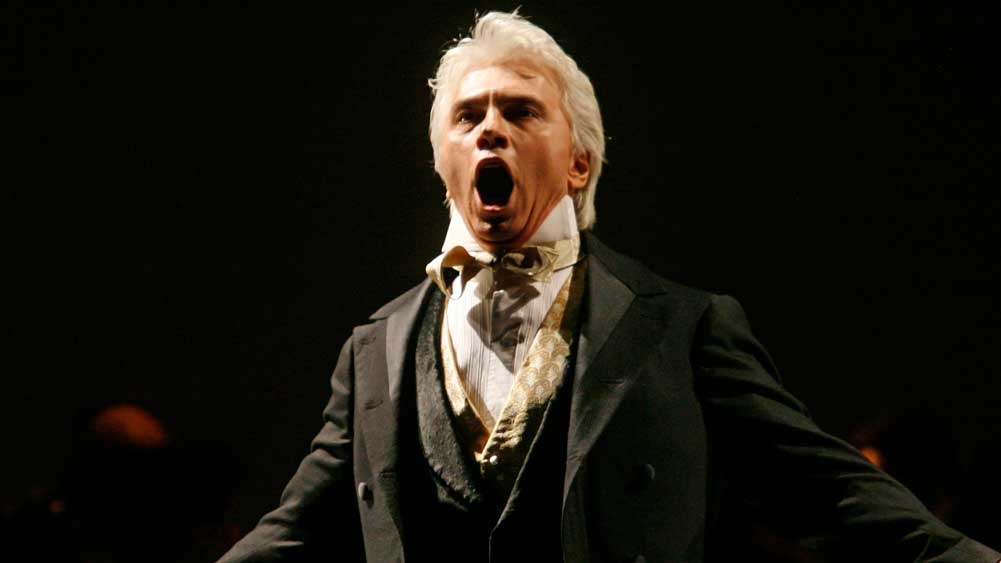 NEW YORK -- Dmitri Hvorostovsky walked stiffly toward the centre of the stage after the surprise announcement by Metropolitan Opera General Manager Peter Gelb.

The 54-year-old Russian withdrew in December from all staged opera performances because treatment for a brain tumour diagnosed in June 2015 had caused balance issues. The baritone's shock of white hair perhaps thinner and his cheekbones more pronounced, Hvorostovsky "defied all the odds to be here tonight," Gelb told the formally attired audience of 4,000, which rose for a minute-long standing ovation.

Back on one of the stages where he became famous, Hvorostovsky lit into Rigoletto's second-act aria "Cortigiani, vil razza dannata (Courtiers, vile cursed kind)" with the elegant, burnished voice heard at the Met 182 times before. Some in the audience had tears in their eyes, and many pulled cellphones from their glittering handbags to snap photos as he walked through the lobby during intermission.

Hvorostovsky's unscheduled appearance was the highlight of Sunday night's five-hour gala celebrating the 50th anniversary of the company's move to Lincoln Center for the Performing Arts. After the film overture to Leonard Bernstein's "West Side Story," set on the land where Lincoln Center was built, 30 staged arias, ensembles and choruses unfolded that looked back at old stars and ahead with young talent, interspersed with several video segments about the Met.

Appropriately, the first opera excerpt was the Met chorus in "Alexandria, this is the news" from Samuel Barber's "Antony and Cleopatra," which opened the new Met on Sept. 16, 1966, a work that has not returned to the company since its initial run.

This era's it singer, Anna Netrebko, sang her familiar cavatina and cabaletta from Verdi's "Macbeth" with snarling intensity and wowed the crowd with her deepening soprano in "Un bel di (One fine day)" from Puccini's "Madama Butterfly."

Angela Meade gave the finest performance of the night in the trio "Qual volutta trascorrere (What wondrous pleasure I feel)" from Verdi's "I Lombardi," a gleaming soprano that teamed with tenor Michael Fabiano and bass-baritone Gunther Groissbock.

Yannick Nezet-Seguin, who takes over as music director in 2020-21, split most of the conducting with Marco Armiliato before 73-year-old music director emeritus James Levine arose Yoda-like from the pit in his mechanized chair to lead seven pieces over the final 50 minutes, concluding with the second-act finale of Verdi's "Aida."

Levine dominated the Met as music director or artistic director from 1976-2016, but in what may be a sign of his waning influence, there was no Strauss and just one bit of Wagner, the entry of the guests in "Tannhaeuser."

Julian Crouch and 59 Productions designed sets and projections of past and present Met stagings that included Marc Chagall's 1966 designs for Mozart's "Die Zauberflote (The Magic Flute)" and Margaret Webster's "Don Carlo" that opened the Rudolf Bing era in 1950. There were ovations for Franco Zeffirelli's 1981 "La Boheme" and 1985 "Tosca." Gelb admitted this year that dropping Zeffirelli's "Tosca" in 2009 was a mistake.