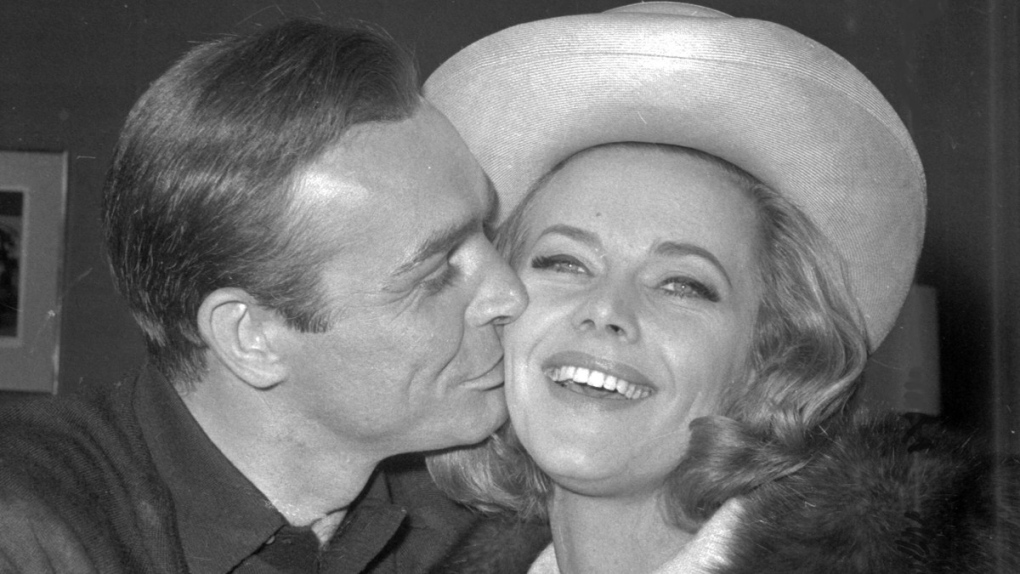 NEW YORK -- Honor Blackman, the potent British actress who took James Bond's breath away as Pussy Galore in "Goldfinger" and who starred as the leather-clad, judo-flipping Cathy Gale in "The Avengers," has died. She was 94.

Blackman's family said in a statement Monday that she died peacefully of natural causes at her home in Lewes, in southeastern England.

The honey-voiced Blackman first became a household name in the 1960s spy TV series "The Avengers." She joined the show in the second season as Cathy Gale, the leather-wearing anthropologist with martial arts skills. Blackman departed the show for Bond before "The Avengers" was exported to America, but her performance solving cases opposite Patrick Macnee caught the eye of Bond producer, Albert R. Broccoli. She and Macnee also recorded the hit song, "Kinky Boots," together.

But just as "The Avengers" was growing in popularity, Blackman departed it for the third James Bond film, playing Pussy Galore in 1964's "Goldfinger." In it, she makes an impression from the start, memorably introducing herself to Sean Connery's just awoken James Bond.

"My name is Pussy Galore."

"I must be dreaming," he responds, smiling to himself.

Blackman was 39 and five years older than Connery when she landed the role of Bond's love interest, and she long maintained the term of "Bond girl" didn't apply to her. In the film, Pussy Galore is the leader of a group of women aviators enlisted by the villain Auric Goldfinger. She uses judo (a skill carried over from "The Avengers") to attack Bond and their foreplay is physical and combative. After they each flip one another into piles of hay, Bond holds her down to kiss her. Eventually, she relents.

Blackman considered Pussy Galore -- a lesbian in Ian Fleming's book -- a kind of early feminist, and a different breed than the average Bond woman.

"In so many of the films, the girls just looked at James and fell flat on their backs," Blackman told the magazine TV Times in 2014. "Yet Pussy Galore was a career woman -- a pilot who had her own air force, which was very impressive. She was never a bimbo."

The character's double-entendre name was one producers said they had to convince censors to permit. But Pussy Galore has regularly ranked as among the most popular "Bond women."

"She was an extraordinary talent and a beloved member of the Bond family. Our thoughts are with her family at this time," said Bond producers Michael G. Wilson and Barbara Broccoli.

Honour Blackman was born in East London on Aug. 22, 1925. Her father, Frederick Blackman, was a civil servant clerk. She recalled her father giving her the choice, as a teenager, of taking biking or elocution lessons. She chose the lessons, and went to attend the Guildhall School of Music and Drama and acting in the West End.

Acting in film, television and theatre for seven decades, Blackman amassed more than 100 screen credits, including the Titanic drama "A Night to Remember"; the fantasy "Jason and the Argonauts" (as the goddess Hera); "Lola," with Charles Bronson; and a cameo in "Bridget Jones's Diary."

Blackman was married twice, first to Bill Sankey, from 1948-1956, and then to actor Maurice Kaufman, with whom she adopted two children. She is survived by their children, Lottie and Barnaby, and four grandchildren.