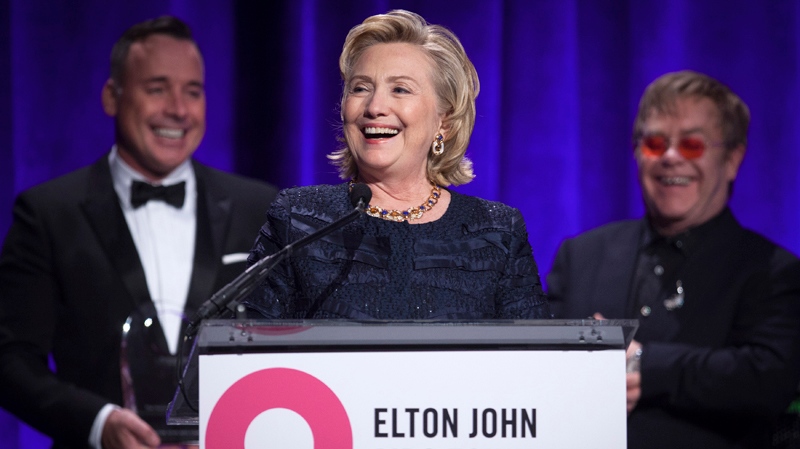 NEW YORK -- Elton John honoured Hillary Rodham Clinton for her work to help those affected by HIV and AIDS at an annual event for his foundation.

Clinton was excited as she accepted the first founders award from the Elton John AIDS Foundation Tuesday night in New York City. The former secretary of state told the crowd at Cipriani's restaurant that "we still have so far to go" when it comes to helping those affected by HIV and AIDS.

"There are so many challenges in front of us," Clinton said. The former senator added that she wants to see an "AIDS free generation" and that accomplishing that must be "our north star."

"I thank you, but I know there's more for us to do," she said. "Humans may discriminate, but viruses don't."

"One of my favourite bands of all time," John yelled before Heart hit the stage.

John was passionate throughout the night, urging the attendees that there should be AIDS "treatment for everyone, treatment for all."

"We must never give up on anyone," he said, adding that those who want to help have to be "stubborn" when it comes to finding ways to assist those affected by AIDS.

The event raised $1 million through an anonymous donor and more funds through an auction, which included a lunch with CNN newsman Anderson Cooper for $12,000 and a one-hour tennis lesson with Novak Djokovic for $60,000. Two different signed photos of John taken by Terry O'Neill went for $26,000 and $27,000, respectively.

Matt Lauer hosted the gala, filling in for Cooper who was on assignment in Washington, D.C. He provided laughs at the start of the event, but received help from John's partner, David Furnish, who also worked to facilitate the program.

John's foundation is celebrating its 20th year. Before presenting Clinton with her award, John paid tribute to Furnish.

"We are a week away from our 20th anniversary," he said to gushes from the crowd.

John told the AP before the event that he hopes Clinton runs for president in 2016.