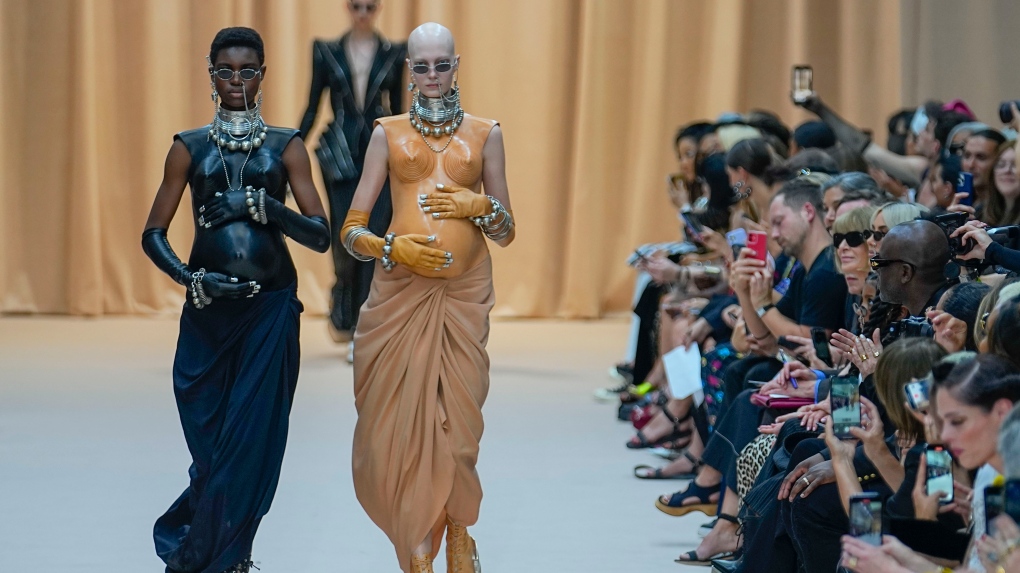 Earthen hues like browns, reds and yellows -- colors long-associated with the heritage brand -- were used at Saturday's show to create Nadege Vanhee-Cybulski's utilitarian, low-key yet luxuriant universe for spring.

Here are some highlights of the day's spring-summer 2023 collections in Paris:

It was a Vanhee-Cybulski minimalist take on the 80s.

The lone pulsating crystal that glowed color from the center of the runway established the collection's key idea: Simplicity is powerful.

As the show took off, the odd utilitarian features -- such as toggles and the strange, perplexing box platform shoes that stomped throughout -- were used with subtlety but aplomb.

It gave a sporty and outer-space feel to the collection's stylish, almost empty, restraint -- a mood that now defines the talented 44-year-old French designer's repertoire.

Last season in Paris, the Ukrainian designers trade fair event took place just two days before Russia's invasion amid stories of some artists fleeing the country so rapidly they had only their children and their collection in hand.

This season sees no improvement back home for the industry: It's been battered by increased financial strains as designers try hard to maintain employed staff despite little money, a decrease in demand and ravished supply chains.

A collective of these designer-survivors is showing in Paris beginning Saturday until Oct.6.

Jen Sidary, the collective's head, said "in my 30 years of working in the fashion industry, I have never witnessed the resilience of a country and its people as they began to focus on keeping their businesses alive, days into the war, from bomb shelters to designing new collections amidst constant air raid sirens."

The six making up the Paris Fashion Week event -- Frolov, Kachorovska, Chereshnivska, Litkovska, My Sleeping Gypsy and Oliz -- are showcasing unisex apparel, footwear and scarves. It's a bid to keep their ravaged industry alive, and form of resistance against the Russian bombs decimating their homeland.

Many of their colleagues back home in Ukraine have had to repurpose their operations to help the war effort, relocating within the country, according to Sidary.

The courage of the Ukraine fashion industry has drawn international attention.

"Disruptions on the domestic market caused by decrease in demand by population and broken supply chains, are pushing companies to explore export opportunities to diversify their sales," she added.

Kink mated with art in the typically quirky fare from Kronthaler -- a staple show where a fashion surprise is all but expected.

With his usual encyclopedic flair, Kronthaler wove an aesthetic from yesteryear -- medieval and renaissance nobles and peasants -- into his drape-heavy silhouettes. Guests almost felt like they were at the theater.

Juliette sleeves mixed with black Renaissance tarbuds, decorated collars and even one wacky but stylish blue loose tuxedo look that could have been worn by the Bard himself. Of course, Kronthaler accessorized it anachronistically with pale blue striped rugby socks. Added to the creative cauldron were chunky Glam Rock boots and a Highlands kilt style with white trimming at the male model's nether regions, making it look like they might have gotten a front bite.

The opening image of Irina Shayk, often voted among the most beautiful models in the world, in a shiny black bustier and silver-ring earrings riffing off S&M will surely be one picture few quickly forget.

The late 1960s got a facelift on Saturday in a collection that featured babydoll dresses, miniskirts, psychedelia, crop-tops and jabot collars -- but never lost that floaty, contemporary Saab touch.

The first look from Saab at his Paris fashion show fused a 1960s angelic-white crop top and a maxi skirt with an ethnic look, thanks to a construction of interlocking motifs. This fusion of different eras continued throughout the show, which sent out 68 items.

Lace detailing was a big theme and became the front of a baggy pale tracksuit top. In an anachronism that defined this Saab spring aesthetic, it was worn alongside a sheer 1990s' tulle skirt. It had a great swag and could have very well been seen at a music festival in that decade.

Flashes of Barbie pink and citrus contrasted with psychedelic stripes on column silhouettes, sometimes making it feel like Saab was trying to put too much in the mix. The collection was ultimately hard to pin down.

Health care has surpassed inflation and jobs as the top national issue of concern, according to Nanos Research’s weekly tracking, as Canadians read reports of hospital emergency rooms under strain and a 'tripledemic' of flu, RSV and COVID-19 cases spiking across the country.

Canada exits the 2022 FIFA World Cup with three losses to its name, registering the joint-worst record in tournament history, but head coach John Herdman and his players remain hopeful the program can become something special after this jolting learning experience.

From boosting cash on hand to cutting staff, Canadian banks are taking a variety of strategies to prepare for a widely expected economic slowdown in the year ahead.

Renewed allegations of racism at Buckingham Palace threatened to overshadow Prince William's trip to the United States after campaigners said the palace needed to acknowledge a wider problem that goes beyond one member of staff.