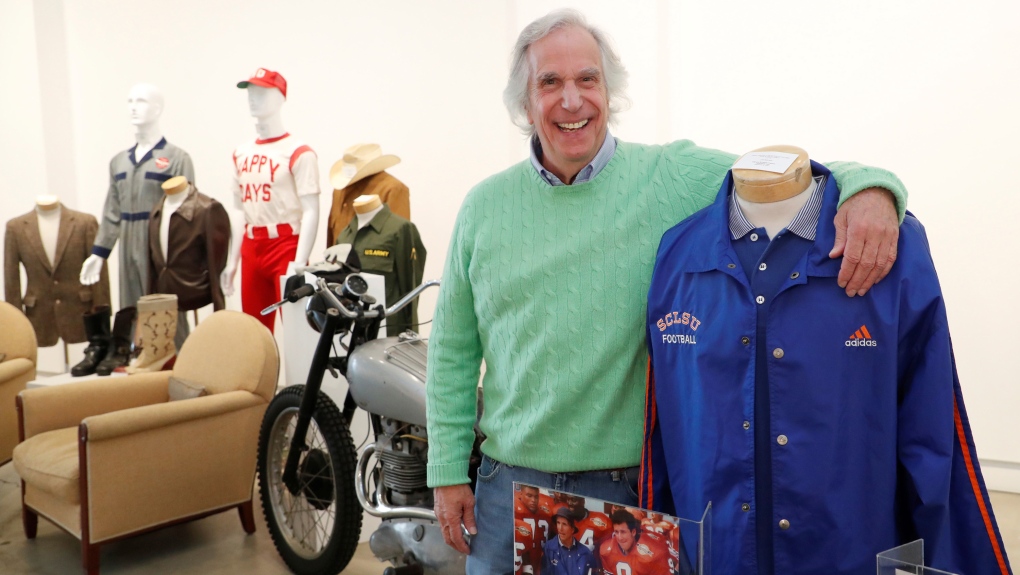 Actor Henry Winkler poses with items from his collection that are going up for auction in Los Angeles. (Mario Anzuoni/Reuters)

"Happy Days" star Henry Winkler is auctioning off a treasure trove of costumes, props and other memorabilia from his acting career, on Dec. 8 in the "TCM Presents ... Hollywood Cool" sale at Bonhams auction house in Los Angeles. TCM is part of Warner Media, CNN's parent company.

Winkler's complete Arthur "Fonzie" Fonzarelli outfit, which includes the Levi's jeans, white T-shirt, black engineer boots and, of course, the iconic leather jacket is expected to sell for between US$50,000 and $80,000, according to Bonhams.

The jacket is one of at least seven purchased for the show, according to the auction website. One of the jackets is in the Smithsonian Institution.

Also up for sale are the Fonz's mechanic coveralls, a uniform shirt from his brief stint in the U.S. Army Reserves and the cowboy boots he wore in the dude ranch episodes in Season 6.

"I never will say goodbye because it is always in my heart and always in my mind. It was the show that threw me out into the world and I will always be grateful," Winkler told CNN affiliate KABC. "Letting a physical thing go doesn't, in any way, diminish the enormity of the experience."

Winker also saved scripts, photos, letters and all sorts of other things from other projects over the years that are going into the auction.

He told KABC he is donating much of the proceeds of the sale to a non-profit his daughter Zoe started with two friends that helps separated and recently reunited families at the U.S. border.

The sale also includes one of Greta Garbo's makeup case, four of Dorothy Lamour's evening gowns, and one of Will Ferrell's Buddy The Elf costumes from the movie "Elf."