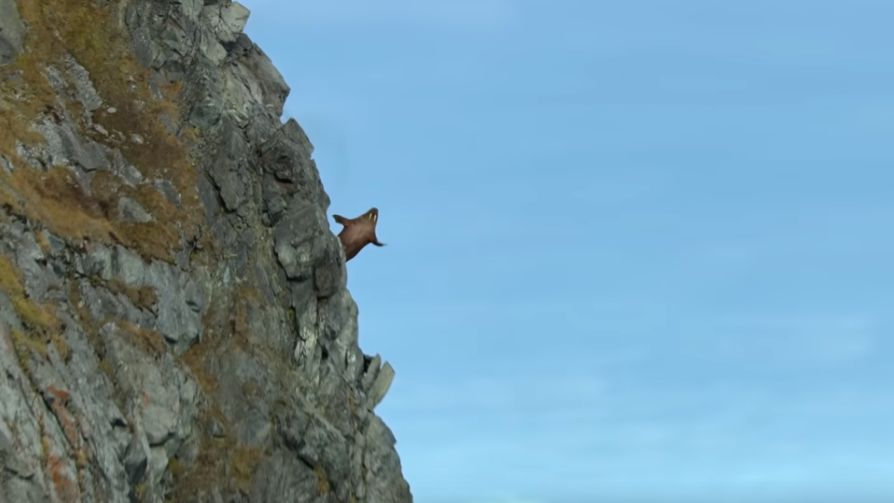 A walrus plunge to its death in a scene from the Netflix documentary 'Our Planet.' (Source: Netflix)

A new Netflix nature docuseries is drawing attention for a disturbing scene that shows a group of walruses plunging off a cliff to their deaths in a phenomenon that the filmmakers say is linked to climate change.

In “Our Planet,” narrated by David Attenborough, a group of walruses is seen shimmying up a steep cliff beside a Russian beach.

“Once at the top of the 80-metre cliffs, they rest until it’s time to return to the sea in search of food,” Attenborough says.

Walruses once lived mostly on patches of sea ice, allowing them easy access to dive into the ocean to hunt for food, such as clams and mollusks. But researchers say, in recent decades, global warming has forced them to move inland.

Rather than head back down the way they came, the walruses in the documentary are seen wiggling to the edge of the cliff.

Then, one by one, the tusked mammals fall to their deaths, their bodies slamming rocks on the way down. The camera pans out to show hundreds of carcasses littering the shore.

The episode has drawn an outpouring of emotion online, with some viewers describing bursting into tears. Others applauded Netflix for showing the “heartbreaking” scene, even if it was difficult to watch.

Jamie McPherson, a cameraman on the shoot, said in a behind-the-scenes video that it was “the worst thing I’ve ever filmed.”

The phenomenon is not unheard of. In 1996, the New York Times reported that 60 male walruses plunged to their deaths off a 60-metre bluff in southwestern Alaska. The mass deaths perplexed local wildlife experts and Indigenous hunters, who had never heard of the cliff deaths.

“Our Planet” has earned attention for its unflinching, up-close look at the devastating toll of climate change. Later in the series, after a group of orangutans are introduced, viewers are told that 100 of the apes die each week due to human activity.

The walrus scene illustrates how melting sea ice is having a deadly impact on the population, according to producer and director Sophie Lanfear.

“They’d be on the ice right now if they could be. But there’s no option but to come to land. They’re just a danger to themselves. It’s really hard to watch and witness this. It’s just so heartbreaking,” Lanfear says between tears as she watches the animals plunge to their deaths.

Life on land can be dangerous for walruses in other ways. Researchers have found herds of up to 35,000 walruses living in cramped communities inland, which poses a risk if the animals become suddenly spooked and rush out to sea. In 2017, 64 walruses were found dead off Alaska’s northwest coast following a stampede.

Activists have called on U.S. authorities to install anchored rafts off the coast of Alaska in hope of preventing deadly stampedes.